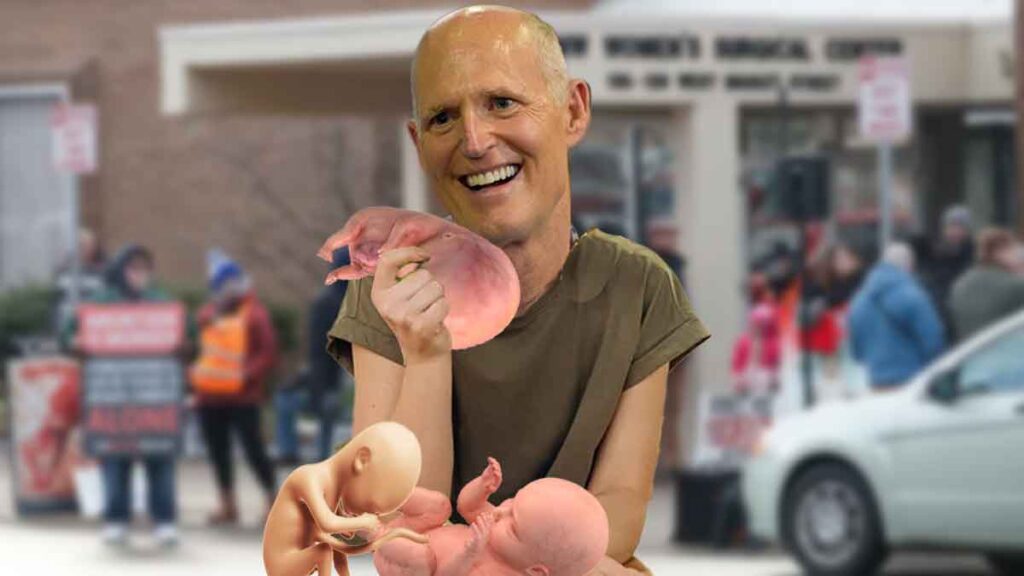 As the Florida legislature readies its Texas-style abortion law, Senator Rick Scott has announced plans to purchase an abortion clinic just to close it.

“We are going to shut this abortion clinic down,” said Senator Scott while licking his lips aggressively. “This isn’t about my body, my choice. This is about killing delicious…I mean precious babies.”

Senator Scott then began bleeding a little bit out of his nose.  His security huddled around him and escorted him out of the building, into his limo. His limo flew into the back of a helicopter and took off into the sky.

As part of the new law, bounties will be paid out to any information that leads to an arrest when it comes to aborting fetuses after 6 weeks, even if the child was bred through sexual assault or incest.

The office of Senator Scott has announced that he will personally oversee the disposal of all the fetuses that have been collected throughout the years.

“This abortion clinic I have purchased contains a beautiful room, with large storage shelves holding dozens of jars containing life!” Said Rick Scott in a video message that was played after he abruptly left the conference.   “These will receive a proper burial, and I will not eat them to gain that precious stem cell boost.”

The video abruptly ended during a clip in which the Senator looked like he was about to eat a raw baby fetus straight from a jar.