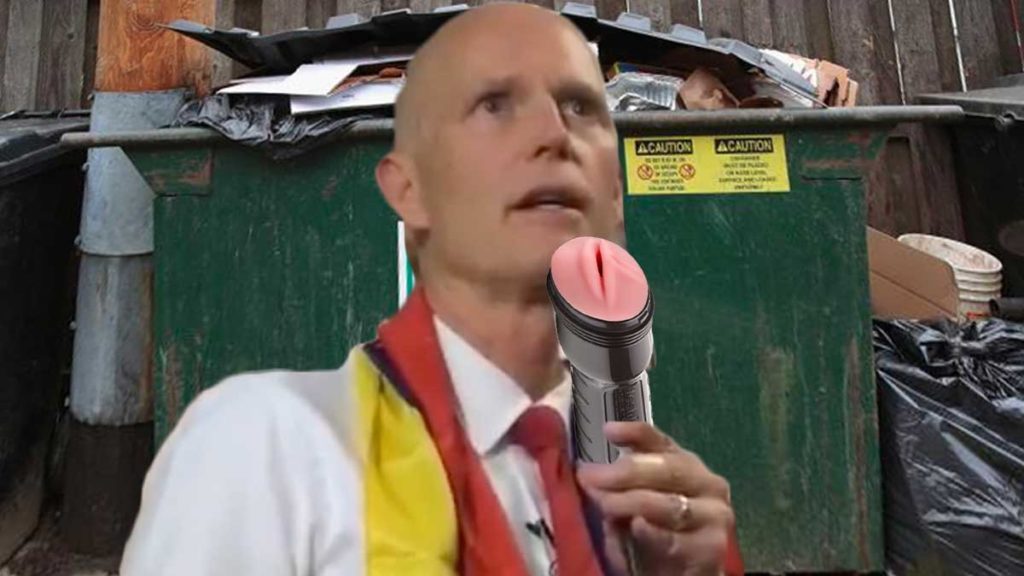 In a shocking discovery, a Taco Bell security camera caught Rick Scott behind the establishment, laying in a dumpster, tonguing the inside of what appears to be a recently used Fleshlight. Who used it and at what time is undetermined, the security footage only captured the moment Senator Scott crawled into the dumpster, then pulled the sex device out of his pocket and began to indulge.

“It’s an utterly grotesque act that we all wish we could unsee.” Said County Chairman Brett Davis. “But despite doing something not only illegal, but deeply disturbing to the core, once again, there’s nothing we can do.”

Davis started doing pushups. “In fact, I work out sparingly throughout the day in fear that the Senator himself will step through my office and come for my soul.”

The room then got very cold.

The lights in Davis’ office went out, then flickered back on to reveal Davis was now headless.

“Get out.” A loud ominous voice whispered, filling the room. A gust of wind blew in my face. “I do what I want, I get what I want, nobody will ever stop me, I am a dark force incapable of taming, I will kill anyone who stands in my way.”

“Oh God, I’m so sorry!” I shouted. “I’m just here for a story, I promise I’ll never write anything bad about you again! I didn’t know if the legends were true that you were really an invincible smoke monster that lives only to enrich itself in financial and politically powerful ways! For reasons that are yet to be determined!”

A loud evil laughter filled the room as all the lightbulbs got increasingly brighter before popping, shattering glass everywhere.

The temperature returned to normal, the voice was gone, but I now only had four fingers on each hand, and one of my feet turned red.

Also, If I die, it’s %100 because of this article. How long can we keep poking this guy with satire before he has us killed? I had to search this article topic on the Tampa News Force website to see if we had done it already, and in that process I realized we already have like 40 Rick Scott stories. This guy has to know who we are by now.

You think he likes it? You think he gets off on it, in like an egotistical way? He goes, “Aw yea, people are talking about me.” While he’s rubbing himself.

I could see that. But Mr. Scott, if you are reading I would like to say, please don’t have me killed. I’ve got a lot of other good articles in me that the world needs to read, and if you’d like to buy the company, we’re selling TNF for $2 million, and I know that’s just a drop in the bucket for you.

Please, end the madness Mr. Scott. Buy us out.