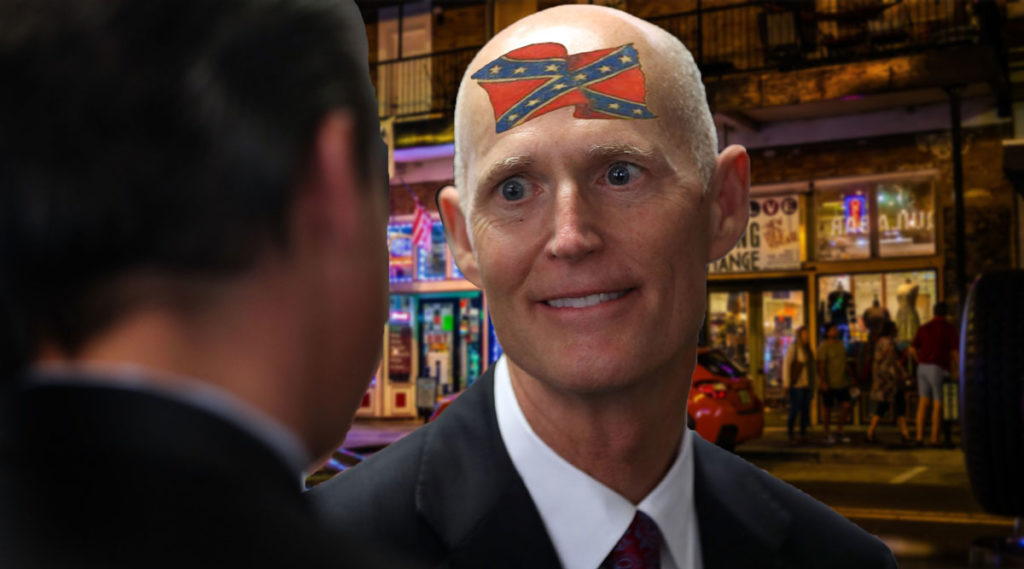 While on a trip to Ybor City to promote hurricane preparedness, Senator Rick Scott decided to get inked by legendary tattoo artist, MarcoEllis Phillifes.

“When he came into my shop, I saw a beautiful canvas,” said Phillifes, a third-generation tattoo artist from Ybor City. “Ricky shook my hand real hard and said, ‘Give me the biggest possible confederate flag you can tattoo on my face’. So I did.”

Senator Scott showed off his new face tattoo at a nearby hookah lounge to a group of kids who were walking by.

“I think they like it,” said Scott while puffing on his raspberry mango hookah.

Senator Scott, who made his fortune through Medicare fraud and most recently spent $64 million of his own money to become a senator, announced he will be pushing for a new law making confederate flag face tattoos mandatory for children born in the United States to prove they are a citizen.

“I only trust people with Confederate Flag tattoos,” Scott said while coughing from taking in too much hookah smoke. “If everyone in this country had one, I would start trusting more people.”

Scott attempted to leave the hookah lounge without paying but was stoped by the immigrant business owner.

“Excuse me sir, you have to pay your tab, you can’t leave without paying!” The business owner shouted after Scott, but the senator pretended he couldn’t hear him and jumped in a black SUV and took off.