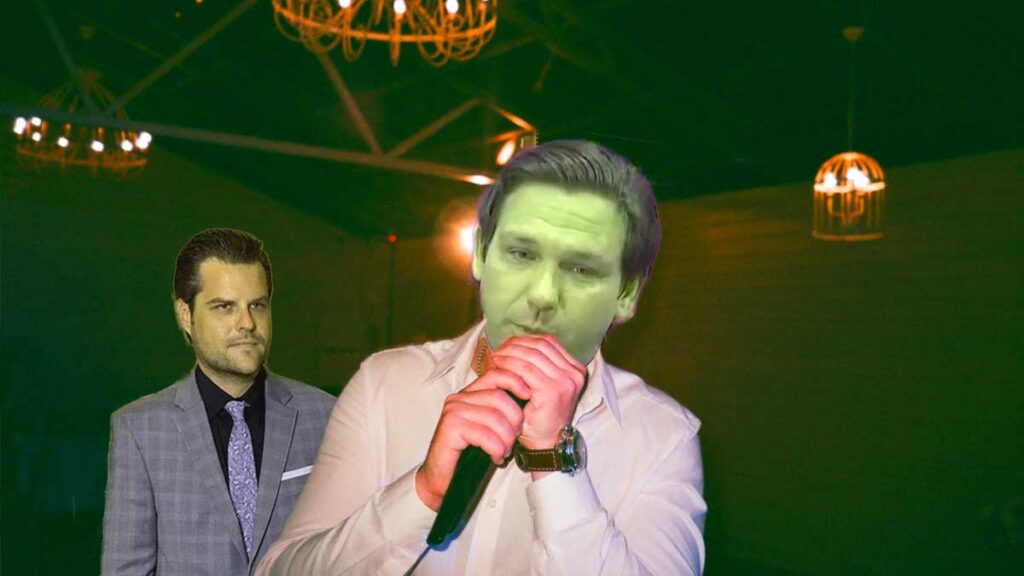 During a drunken outing with Congressman Matt Gaetz, Florida Governor Ron DeSantis was egged on into rapping the Oscar-award winning Eminem song, “Lose Yourself”.

“I’ve seen that movie ‘8 Mile’ like a thousand times,” said Jimmy Jordan, a drunken crowd member who was at the same bar Gaetz and DeSantis passed through during their recent bar crawl.  “As soon as that beat kicked in, the whole bar, which was PACKED by the way, started going crazy.”

Jordan described how a fat chubby guy jumped on stage with his hoodie up, covering his face and singing the song without even looking at the lyric screen. Everyone in the bar then realized the hooded figure rapping Eminem was none other than the current Florida Governor, letting off some COVID related steam.

“I was fucking wasted and then everyone realized that the guy on stage was DeSantis fucking bringing the heat man!” Jordan pulled out a pint bottle of Jim Beam and started downing it, then he offered me some.

I refused because I was wearing a mask and I didn’t want to put my mouth on the same thing that another person had just put their mouth on. Jordan shrugged his shoulders and finished the whole bottle before throwing it at a passing car, shattering its back windshield.

The car then stopped abruptly and a guy wearing what look like a recently deceased mans burial outfit, jumped out.

“Woah man, what the hell is wrong with you,” said the man, very angrily.

Jordan tried to blame me for throwing the bottle, which shifted the man’s entire aggressive focus to me.

“It’s media people like you who are ruining this world,” said the man who started taking out all the trash in his car and throwing it at me.

I was hit in the head with a closed can of Monster Energy drink, knocking me out and causing me to fall on the sidewalk.  I fractured my skull and an ambulance had to take me away to a nearby hospital.

Once I awoke, a nurse told me that I had been asleep for three years and that I was now living in the year 2023.   They caught me up on all the recent politics, telling me that they had found a vaccine for COVID, but they only gave it to rich people. They later found out that it didn’t work, and they all died.

With no more rich people alive, the middle class was encumbered with massive wealth and were burned by the newly found responsibilities, which led to a second civil war. The war lasted all of two months, and was settled with a game of Super Smash Bros.

Society is now based on gamer score points and the only currency is Dogecoin.

I traveled back in time to tell everyone to invest $25 in Dogecoin today so that they too can become millionaires by the year 2023.