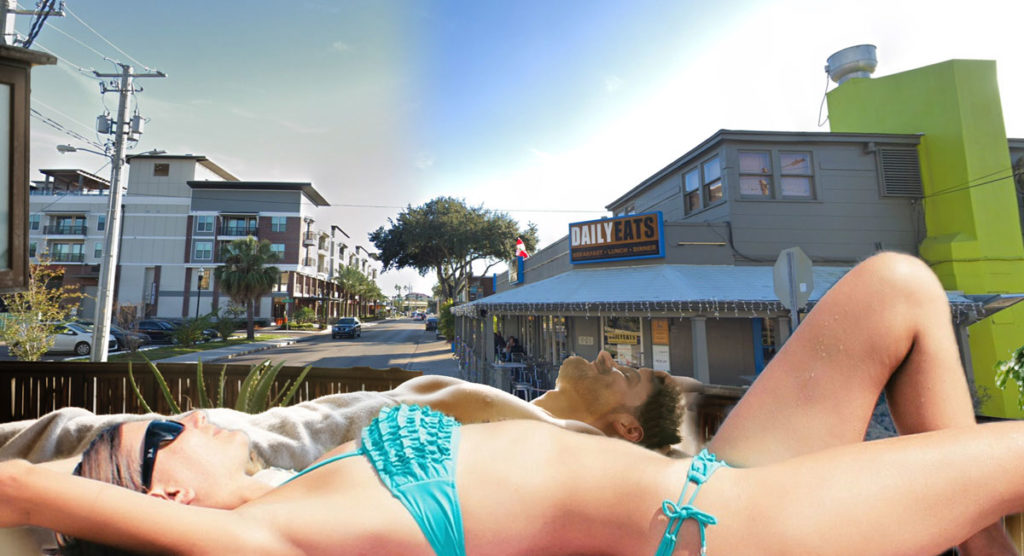 A new tanning salon in Hyde Park has opened featuring no roof, leaving guests exposed to the natural sun. Some are calling it a scam, others are calling it genius.

The creators have called it “Soho Natural Tan.” It’s a vintage two-story brothel that’s converted into an eco friendly tanning salon, with a faux beach design giving patrons the privilege of lounging by a fake pool with the real sun, in the middle of Tampa’s hottest retail market.

Lines have been around the block, since the opening of the salon, and some are referring to it as a modern day art project, combining utility with vanity in a green way.

“These people are going to get tans anyway, why not try to trick them into doing it the healthy way?” Says Soho Natural Tan director, Nate Bloomington. “I tore down this ceiling with my bare hands.” He said as he gazed down at his powerful arms. “I jumped into the air with a sledgehammer and tried to overhand swing into the roof of the ceiling, and it worked better than you would have thought. I started bringing down bricks faster than the New York Knicks.” Bloomington did a fade away shooting motion.

Jennifer Radion lives in Hyde Park and she couldn’t be more excited. “I’m so excited.” Said Jennifer. “I like to go tanning, but I want to do it more healthily? You know what I mean? So I do it outside on the inside,” she struck a pose and a guy crashed his truck into a tree because he was looking at her while driving.

It cost way too much money to come here. It cost $8,000 a month. And I’m not kidding when I say I saw 70-80 tops, folks waiting on the sidewalk to get inside. Mad heads. Lots of people. Cornering, and lapping, the block, waves and waves of folks after folks. Millions of people! So many people! You would not believe it! The owner drives a red Lotus Elise. Let’s just say there’s a little more sugar on top than you’d like! (If you know what I mean!)

I’m sorry I let my three year old get a hold of the keyboard during the last couple paragraphs of this story, but my delete button doesn’t workk. ah shit I accidentally put two K’s on the end of “work” in that last sentence! And I forget to Capitalize the first letter of the sentence in the sentence before that! Damn it! Also, when I said “my three year old,” I wasn’t suggesting that I have a child, I was just stating that it’s “mine.”

In conclusion: Soho Natural Tan gets 2 big thumbs up from us over here at the Tampa News Force, and if you have an extra 8 grand burning a hole in your pocket, snag up a membership for this exclusive soon-to-be-obsolete-because-the-sun-is-exploding technology, combining the natural with the unnatural in a truly inspiring combination of interior design from Giavenchy Dormino, son of Redrack Krumpleng the brother of famous designer Bredrack Krumpleng, from the Norwegian west-easter province. Trust me, you’ve got to go to this tanning salon.

I’m sorry this entire story was my three year old, I really didn’t have much to do with it. (And also, when I say, “my three year old,” I’m talking about the one that wandered into my house and I keep as a pet, I don’t want people to get confused and think I have a child, no it’s more of a crude roommate situation, don’t get me wrong, I take care of the kid perfectly, but he has no recollection of his past or what his own name is, so I just call him “mine,” because I’ve been taking care of him, he recently learned how to type English. I have no idea what he was typing before, but trust me it wasn’t English lol. It looked more like some sort of alien alphabet. Hieroglyphic type stuff. Really, really, weird stuff. But anyways, that’s why the article is a little weird. It’s his fault. Many apologies.

← Real or Fake News : Is Rick Scott Secretly the Red Priestess from Game of Thrones?Top 5 Places to get Laid in Tampa Bay →