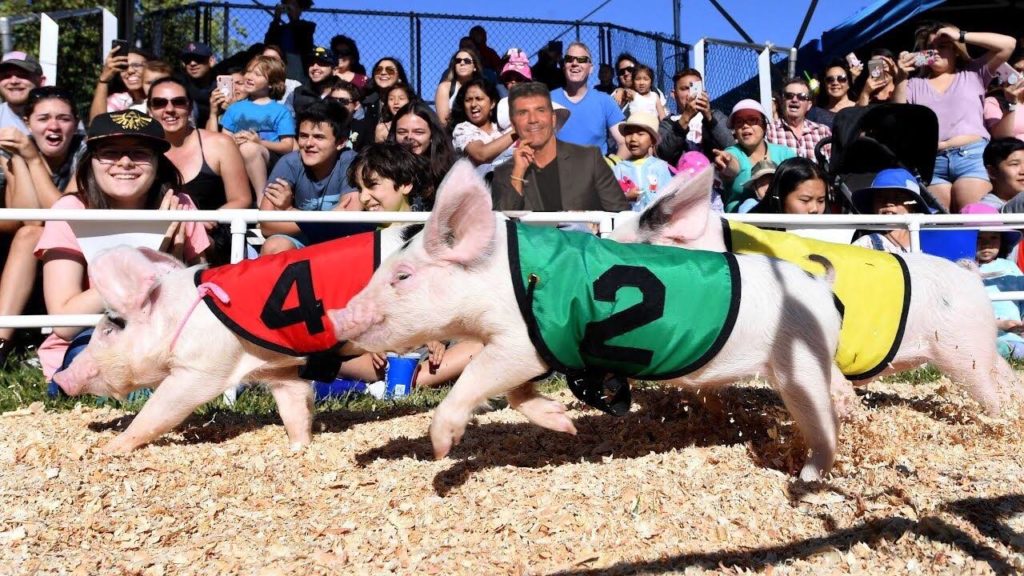 His appearance came as a surprise as it was not announced on the schedule, he just happened to be visiting the festival with his daughter and decided to lend his services to the pig race that happened to be going on when he walked by.

“It was very entertaining, he was fun to watch.” Said Patty Lumpling, a festival-goer who happened to witness the instance.

“Yea, he was like ‘that pig is fast!’ And everyone laughed.” Said, Lumpling’s husband, Denver Mulmatto.

“My wife didn’t take my last name, but I’m fine with that.” Said Mulmatto.

The winning pig of the race Cowell judged was Petunia, a 3,000-pound “super pig” which was bred in a laboratory and raised on a hearty diet of steroids and okra.

“The pig was so big, it kind of blocked the track from the other pigs, so they couldn’t run around her.” Said Tiffany Barbell, a local dog whisperer with her own TV show who was in the stands during the race.

“It was not me judging that pig contest.” Read a tweet from Simon Cowell’s official Twitter account, however there are multiple pictures of Cowell holding up his identification at the pig race and multiple other factors which would determine it was definitely him.

Why cause of why he would claim it was not him judging the race is undetermined, but officers of the law who checked his ID also confirm it was him.

“I just think it was cool he stopped by to judge my pig race.” Said Ashton Runkbunker, head master of the pig racing games at the Strawberry Festival.

At the end of the race, Cowell proclaimed, “I will come back every year to host one of these races!” As he waved to the crowd, then put back on a pair of very expensive sunglasses.