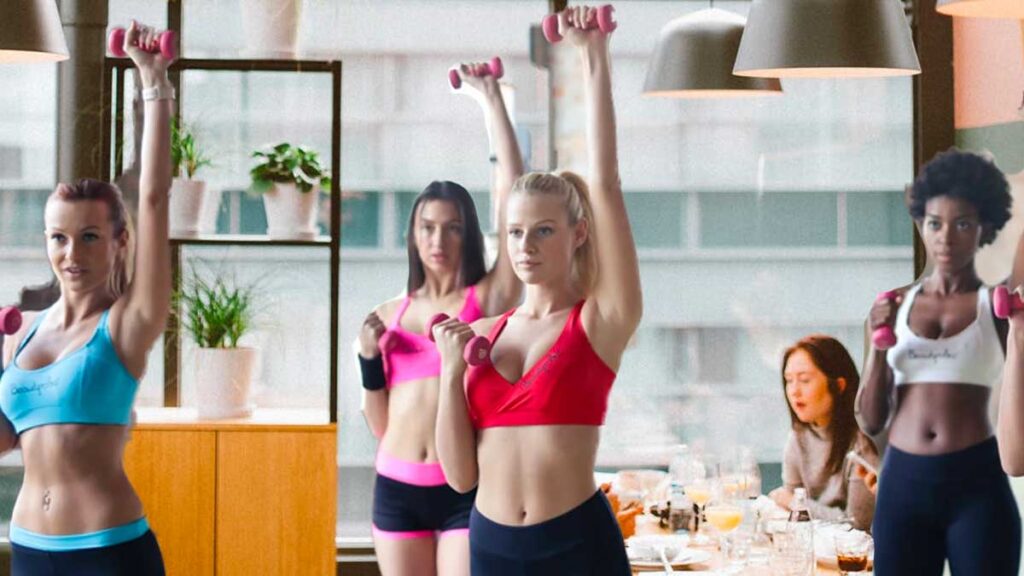 While many people are itching to get back to the gym, one Downtown St. Petersburg restaurant is hoping to fill you up after re-racking their weights.

Beginning today, customers who place their orders at The German Knodle will be allowed to get a few reps in while hanging out in the new waiting area stocked with free weights, a squat rack, two medicine balls, a shoulder press machine, and a leg press machine.

“We want the people to come try our wurst, and show us their best!” Said owner and operator of The German Knodle, Adalia Jürgen.  She then started flexing and bet me that she could bench press me.

“It doesn’t look like there are benches here for presses,” I said to Jürgen, who threw me a smile and nodded for me to follow her to the back. Once we passed the kitchen, she took me in to a small room with a tiny little door on the floor.

“The food-waiting gym is a front to see who is serious and would like to join our special work out area,” Jürgen said before opening the tiny door, revealing a ladder to a basement underneath the restaurant.

I climbed down after her and I was transported to a world class gym, hidden underneath the city of St Petersburg.  There were rows of workout benches and equipment that stretched out for what seemed like miles.

While I stood looking around in amazed admiration, I giant hand slapped me on the back, snapping me right back to existence.

“Like what you see there Champ?” Said John Cena, who had come up behind me to surprise me.

“John Cena!” I said to myself while his wrestling theme music played in my head.

“That’s right, welcome to my secret work out club.” Cena said while introducing the room to me.  “Adalia was kind enough to allow me to transport all my exercise equipment here until the gym ban has been lifted.”

As soon as he said that we heard a loud bang coming from the restaurant kitchen.

“Oh shit it’s the SWAT team!” Screamed Jürgen, who then turned her attention to me and began questioning my loyalty, “Who sent you? Are you wearing a wire?”

“I am wearing a wire,” I announced while ripping off my mustache and revealing that I was a CIA member posing as a journalist looking to stop anyone trying to work out in a gym.  “You are all under arrest!”

The SWAT team then came in and arrested Jürgen and Cena.  I was then congratulated by Mayor Kriseman who came in to check out the underground gym.

“Great work Chingy Lopez, you are one amazing journalist/CIA agent,” said Mayor Kriseman.  “I would like to present you with a key to the city and your own parade.”

“I would like that Mr. Mayor,” I said to Mayor Kriseman.  “But until this virus thing is all over, I don’t want to be showered in admiration and risk the health of all the beautiful citizens that occupy this land.”

I then put a mask on, walked home, jerked off three times in a row and fell asleep.