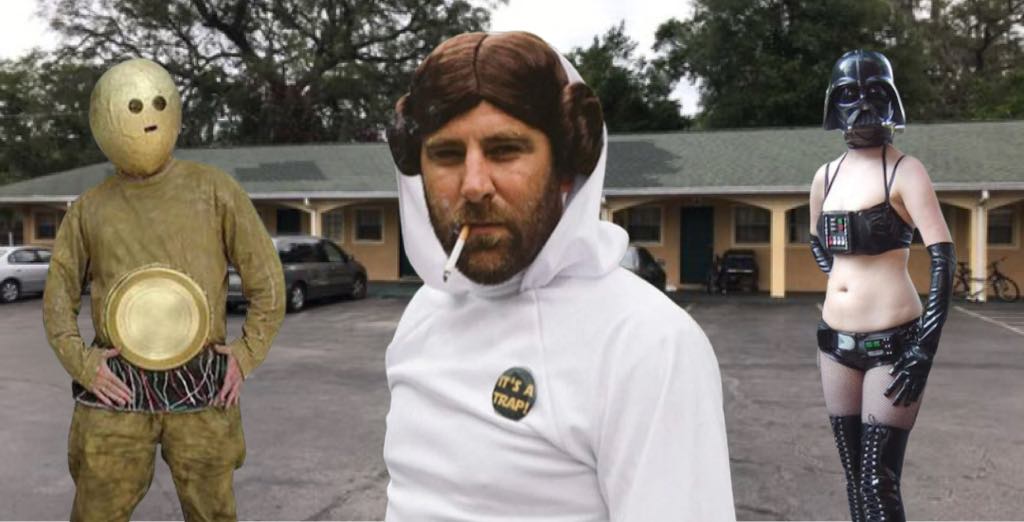 “Those Disney folks are charging a few grand a night for some sleeping pods,” said Luke Bacca, founder of the recently renovated Star Wars motel on Tampa’s famous Nebraska Avenue. “I went ahead and converted all the outdated rooms in this dilapidated motel into sleeping pods that strangers can rent by the hour.”

Bacca gave me a tour of the motel which he has dubbed The Lightsaber Inn.

“This place is going to be baller dude, we have the staff dressed up in silly costumes and shit, we have a midget that hoses the sleeping pods out after every guest leaves,” said Bacca who was drinking a big can of malt liquor. “I want people to come here and have an out-of-this-world experience.”

Bacca then knocked on one of the sleeping pod doors.  “Ok buddy, your two hours are up!” He drunkenly yelled.

We waited patiently for 15 seconds, Bacca quickly became angry and whistled for the cleaning midget.

“You called for me boss?” Said the midget who drove up on a miniature fire truck with x-wings glued to the side.

“Yeah, clear out pod 13. I got one of those Disney lawyers waiting for me in the lobby.” Bacca then chugged the rest of his drink and started heading to the check-in office. “You’re gonna want to report this shit man, these Disney fucks have been bothering me about opening this place for months now.”

When we got to the front office, a group of lawyers swarmed Bacca waving Cease and Desist papers in his face.

“Come on, we can work this out guys,” said Bacca who grabbed another big can of malt liquor from the mini-fridge behind the counter.

“We’ve been trying to reach you for weeks Mr. Selenaca.” Said one of the lawyers.

“Woah man, quiet down we got an image to keep up here,” said the man who introduced himself to me as Luke Bacca but turned out to be some dude named Bobby Selenaca.

Selenaca was arrested for his refusal to change the name and concept of the motel.

Construction crews immediately came in and started taking down any Star Wars-related décor, but they stopped halfway through when they realized everything was covered in blood, sweat, and semen.