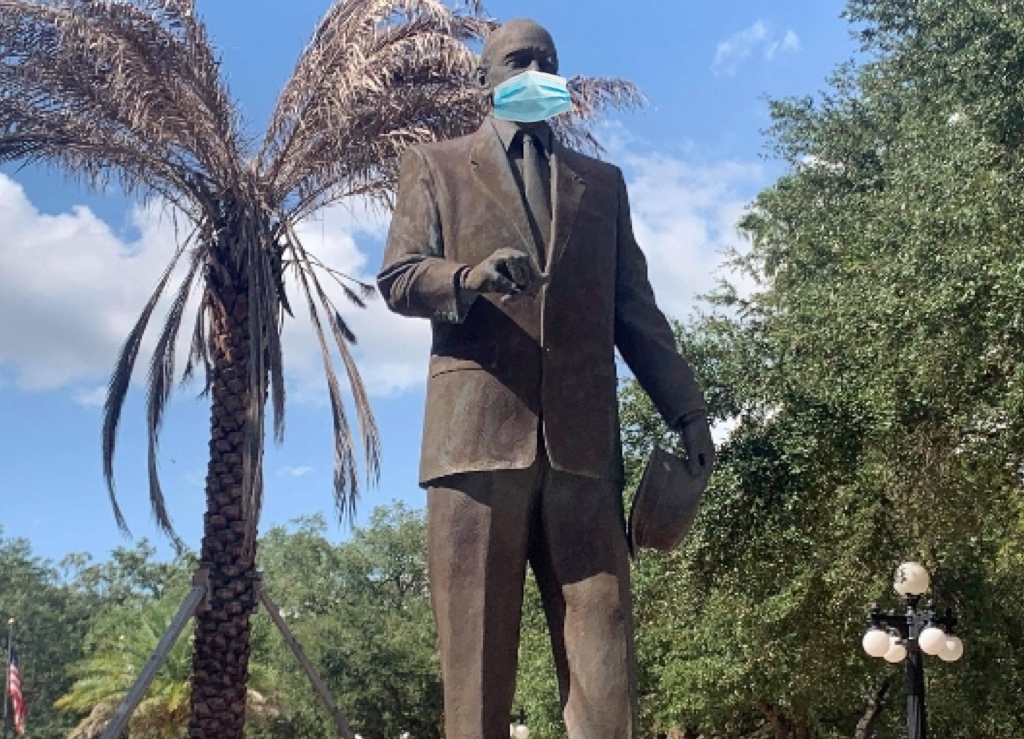 The beloved statue of former Mayor Nick Nuccio has contracted covid, and now must social distance from other statues in the park.

“Luckily the nearest statue to Mr. Nuccio is over 25 feet away, so we don’t don’t think there’s a high chance of it spreading.” Said Bethany Coral, Senior statueologist for the Tampa parks department.

“We believe one of the chickens gave it to him.” She said.

“They climb all over him then they go peck through trash behind the bodegas and get high on discarded vape juice and cigars.”

A fence will also be installed around the statue which will disrupt the line of hugs which functions from 2-3pm every Tuesday.

“It’s a shame because the kids will miss hugging the statue.” Said Matt Kresman, operator of the hug line.

“The kids, they show up early so they can be first in line at 2pm to hug Mr. Nuccio. They say, ‘good to see you again Mayor Nuccio! We hope you’ve had a good day!’ And it’s cute they tell it their secrets and confide in the statue, I get a real kick out of my job, I love this place.” Kresman said.

Then suddenly a lightning bolt struck the center of the Nuccio statue sending a shockwave through the ground, sending electric current though all of our bodies, but not in a painful way.

“Hi, I’m God.” Said a being standing in front of us in the center of the park.

Everyone gathered around stunned and dazed from the lightning.

“The only way you can beat Covid is by believing.” It said.

“That’s a load of bull!” Shouted a guy in the crowd with a backwards hat on.

Lightning from God’s eyes shot into the man zapping him to a crisp in a blaze of swift brutality.

“Anybody else think it’s a load of bull?” Asked God.

Everyone shook their heads.

“Good! So anyways, if you believe in me and wear a mask, and work out every day and get some sunlight and eat fruits and vegetables and drink lots of water and eat healthy things that have low sodium and sugar, you will be able to defeat the virus. It’s REALLY not that bad.” God stressed.

“How many stories of 104-year-old ladies surviving the virus do I need to keep putting out before you guys get it? It hurts everything that is not natural. All that poison you fill your bodies with? Green dye #9 and all that shit? Yea, this thing comes down and kills all that shit, so if you’re full of it? Tough luck dude.”

“If you think this is harsh, just understand, there’s a trillion planets out there and millions of them have this right and all worked out, so I can state for a fact that you’ve brought this on yourselves as a whole, and I don’t feel empathy for you, because I love you, and I know when you leave this world you meet me in heaven and get to choose whether you go back down lottery-style on a giant spinning wheel.” God said to an astonished captivated crowd.

“Well, I’ve said too much, I didn’t mean to get this deep, I need to erase some of your memories, but you’ll remember you saw some chickens or something, it’s like the Men in Black device, live healthy and be nice!”

Then God disappeared in a flash and nobody remembers what happened.

But I do, because I had my audio recorder going so I heard all of this when I got back to the office, so as unbelievable as that sounds, I have the audio file right here to download and you can be the judge yourself.