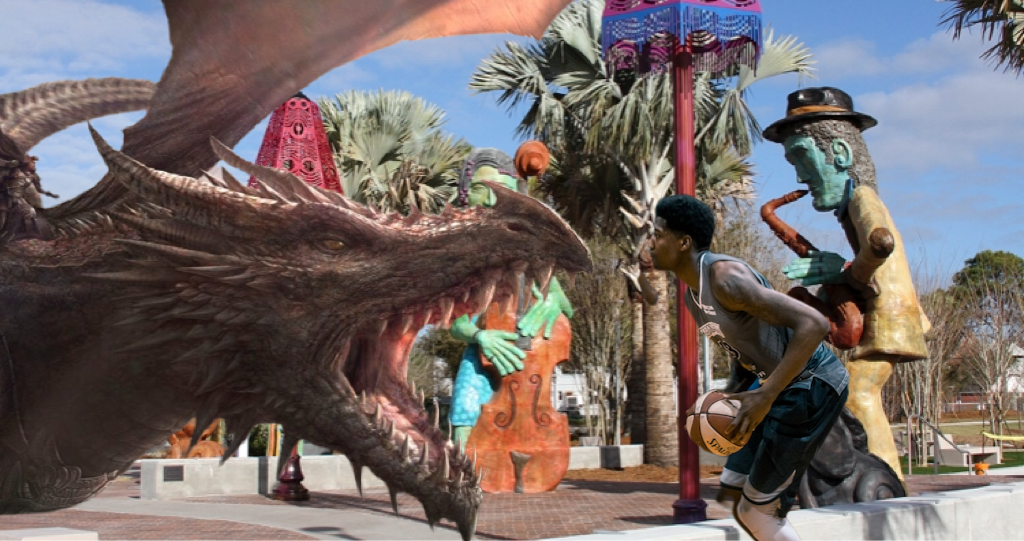 A magical talking dragon landed on the basketball courts located in Perry Harvey Sr. Park on Sunday, then began to explain the concept of magic to all onlookers.

“You see, infinite worlds live outside of yours and while you may not be conscious of them at this moment, we are conscious of your existence and we struggle to keep balance in your realm, whereas our universe is perfectly balanced, we now have the responsibility of helping you achieve serenity in yours.” The dragon calmly said to a handful of stunned passers-by.

“There are a magnitude of energies outside of your atmosphere which influence all of you in ways you don’t understand at the moment. Parts of your brain and senses you aren’t aware you have are being effected every day and beings from our realm have been trying to steer humanity in the direction of love and peace but beings from other realms with evil intentions have been placing spells and curses on your world which we are vehemently trying to reverse as we speak.” The noble monstrous creature continued.

“Wow!” Said a homeless man who happened to be sleeping on the basketball courts.

That’s as much detail as we were able to get through a childs Tik Tok account who was on scene to record the events that take place, but that was as much as we got before his data plan ran out.

What we know from the rest of collected eye-witness accounts is that the dragon explained something called the “Razcoatle” which is a powerful crystal substance which is buried thousands of miles below the earths core which has the power to repel the negative energy cast by the evil spells, but he is not allowed to bring it to us, and that we must dig up the crystal ourselves.

At this point the crowd began to get suspicious of the magical dragon (so we’re told from firsthand recollection) and then it was revealed that the dragon was actually a timeshare salesman in a large fabric costume, however the Tik Tok makes it look exactly like a giant dragon supposedly due to a filter.

Whether or not it was a real talking dragon or a timeshare salesman is still up for debate. Some claim it was a real dragon with a message from another world, others believe it was Rick Davis of Pinellas County who recently got fired from his strip club bouncer job for selling bath salts. Tampa News Force will update the story as more information comes in.