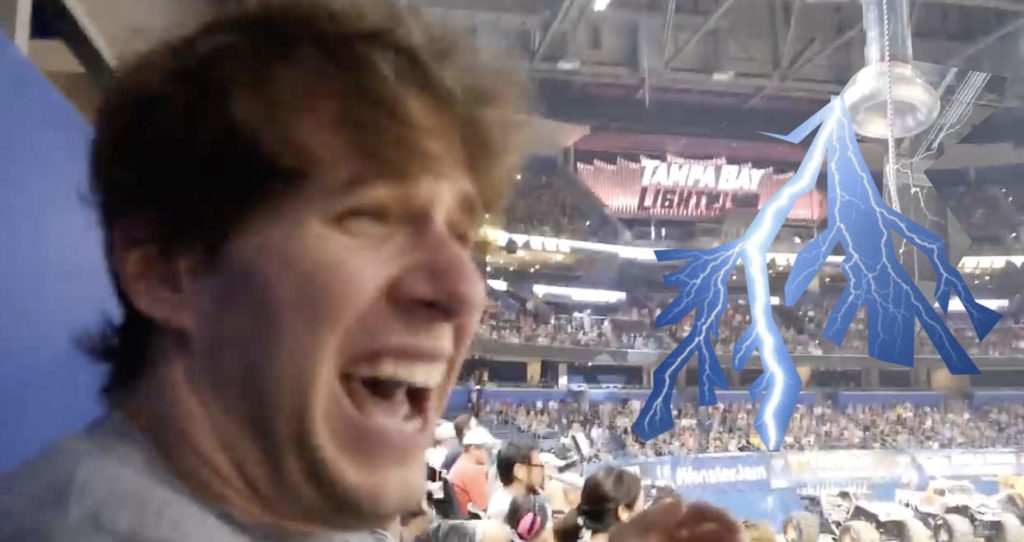 In honor of the late Nikola Tesla, and in a synergy cross-promotion effort with the Elon Musk company “Tesla,” for one night only, Amalie Arena will crank up the intensity of the Tesla coils during the upcoming Lightning game against the Dallas Stars.

“We’re excited!” Says Chelsea Molton, long-time lighting fan, double-fisting 24oz cans of Bud Light Lime. “My daughter always says, ‘Mommy, mommy, can I touch the lightning, it’s like Harry Potter!’ And I say, ‘No, no, I’m sorry honey, the lightnings’ not strong enough to reach our seats.’ And it always breaks my heart to see the sadness in her eyes knowing that when the hockey team scores a goal, the lightning will forever be a tease to my sweet daughter…” Chelsea then uses her head to motion towards the sky, “Not anymore! We’ve already got our tickets, and I can’t wait to see the look on my daughters face when lightning bolts start striking all around us.”

This is the first time in the history of a professional sporting event that a Tesla coil will ever be powerful enough to reach the fans, however, Lonnie Lectro, the arenas electro-compulsion manager has assured us that everything will be fine.

“We raised the intensity just enough to give you a shock, but not enough to knock you out, I think.” He says. “We tested it on Carl earlier, it knocked him out for a second, but then we turned it down a couple clicks, and the second time he said it only made his neck numb a little bit, but he might have still been sore from the first shock I’m not sure.” Lonnie starts looking around, “Have you seen the Bud Light Lime guy anywhere? I only have $14 left, but I heard he opened early today so I want to get one before the dinner rush comes in.”

Due to the extremely viral nature of this unique promotion, the Rays have considered letting patrons swim in the ray tank in the future. “The Lightning are clearly onto something,” Says Rays PR manager Slade Daly. “The Lightning have been getting a lot of attention for this new PR stunt they’re pulling coming up, so we’ve been experimenting with our own promotions. Maybe let children use experimental ‘ray guns’ to shoot out into the field during the 7th inning stretch, if we could some how harness the power of sun rays that might be a decent marketing pun too. Kids love puns these days.” Daly puts his hat back on and drives a golf cart onto the highway.

Elon Musk was contacted for comment however he was busy trying to grow bean sprouts in a VR cave on Mars.