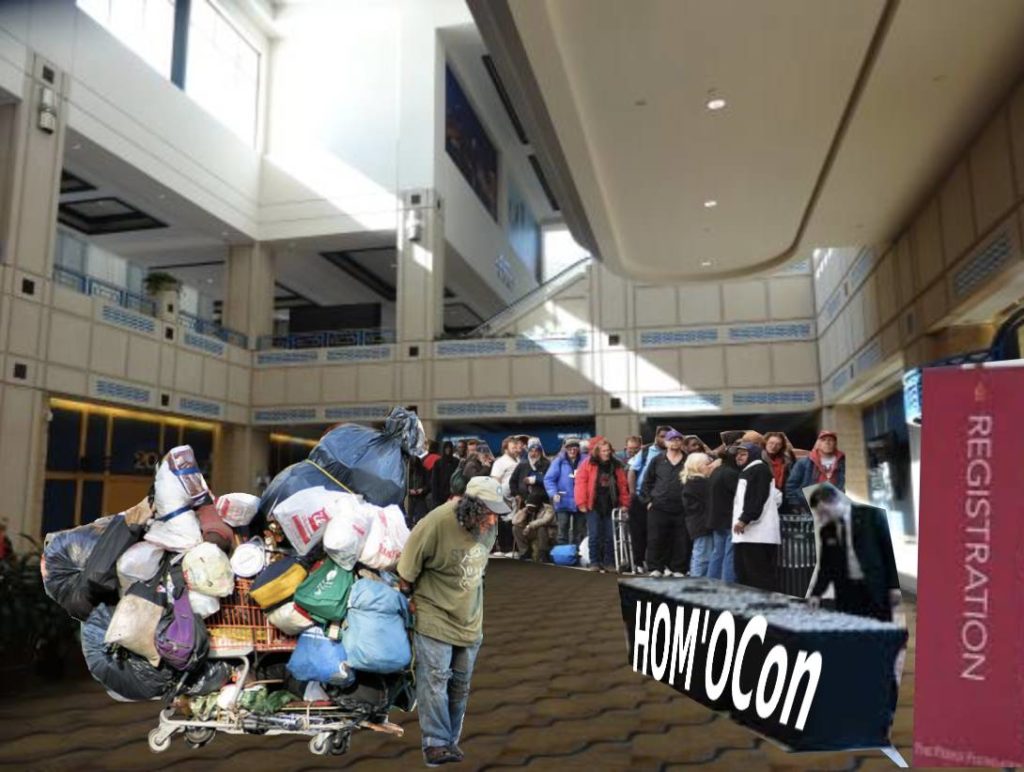 Tampa Convention Center is preparing for the sixth annual Homeless Organization Convention, (HOM’OCon.) a traveling panhandler gathering that brings together the best panhandlers from around the globe for three nights of workshops, networking events and presentations.

The convention has in previous years attracted over tens of thousands of attendants who assumed it was a housing convention.

“I should have been suspicious when they preferred I pay for admission with a shopping cart full of recyclable cans,” said Lorreinne Kokowski a local realtor who attended by accident for the second year in a row. “Really wish they would warn people about that.”

Squiggy has been voluntarily homeless for 12 years, this is his third year attending and first time presenting.

“It’s a real community,” says Squiggy, he asks me for some spare change but I say I only have a debit card and thank him for his time, “It’s okay man, I need $2.75 more and I can catch the bus home, God bless.”

The three day convention begins at 2 PM with a keynote speech from HOM’OCon founder Rain, on how to transform a public library restroom into a makeshift shower.

Standing barefoot at a staggering 6′ 6″ with a grizzled tattooed exterior, barely covered by a pair of dirty overalls, Rain has managed the traveling convention which has held a winter meeting in Tampa and a summer retreat in New York City since 2013.

“Hey man, can you help a brother out?”, asked Rain as he tuned his guitar. I politely declined and awkwardly explained I only had a debit card.

A full schedule will be written on a piece of cardboard and placed out front of the convention center.

“We’re not letting anyone in here,” says Tampa Convention Center representative Sully Reynolds, she looks around and backhand whispers to me, “sure, they can hang out around it, we can’t control that, but we got some nerds cosplaying this weekend and we don’t wanna scare them off.”

“Last year one of them came in here to use the restroom, I was gonna let it slide but then I caught him taping the lock on the exit so that they could get back in,” says Reynolds with very animated and exaggerated hand gestures. “I hear some noise coming from one of the meeting rooms, walk in and am immediately overwhelmed by the smell of hundreds of panhandlers.”

Reynolds eyes begin to water and he throws up a little in his mouth, “besides the smell, the presentation and set design was fantastic, but we had to kick them all out and tear it down.”

In previous years, HOM’OCon organizers had been met with hostility from the local government who claim that the convention is illegal.

“We didn’t sign anything, they don’t have a permit and aren’t allowed inside,” says Tampa government spokesperson Bhilly Towner. “We’ve been trying to contain all the homeless to that one corner on Nebraska Avenue, we don’t want to ruin the view of downtown for Lightning fans.”