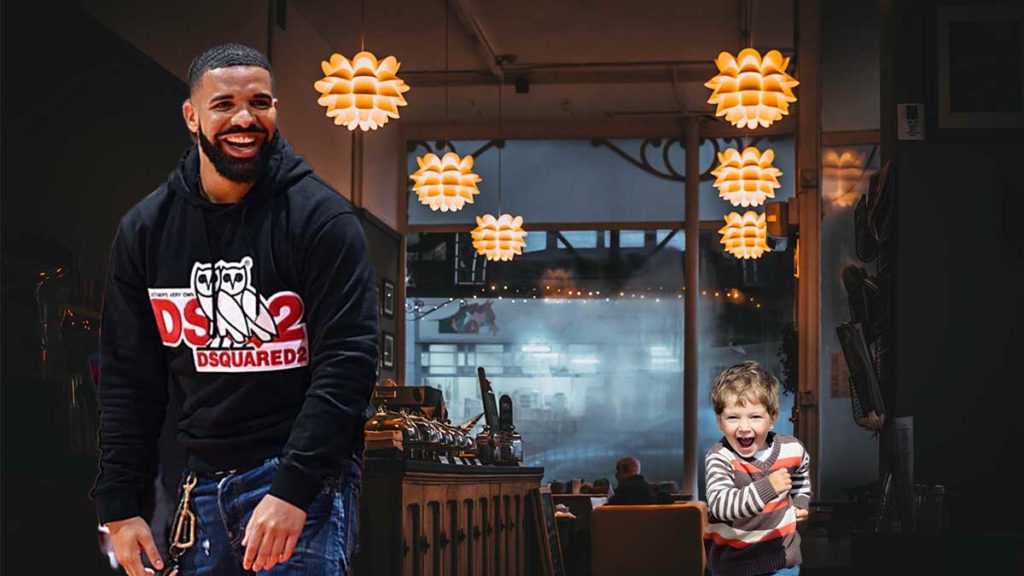 In a truly bizarre turn of events, a Hillsborough County 6-year-old has become the co-owner of a new Chinese buffet scheduled to open as part of the Midtown development on Dale Mabry.

The upscale exotic dining experience will offer chocolate and cheese fountains along with crab soufflé. The “6ix buffet” is confusingly named and inconvenient to locate on GPS, but Drake thought it was a good idea so people are calling it creative.

The Tampa child, Robert Milky happened to be at the right place at the right time when he was offered the opportunity of a lifetime to open an eatery with Toronto’s pride, and one of the most commercially successful pop/rap artists of all time, Aubrey “Drake” Graham.

Milky was visiting his father in Toronto when he got lost at a Target and wandered onto the street, coincidentally at the conclusion of game 6 of the NBA Finals, right at the exact moment Drake stopped to get some Sprite.

“The Raptors just won the NBA Finals, I’m in a generous mood, I just got a jet, I’m rich as hell, I can literally do anything I want,” Drake emphasized to the child, “Like, I’ve been doing everything I’ve ever wanted to do for years and years now, and It’s still fun, but now I can afford to just hand out money in music videos, and I’m a dream maker, so what’s your dream my little blood clot ting woe bro broski.”

Milky paused for a moment, “I’d like to hang out with you!”

Drake laughed, “I can definitely do that bruv lil yung soldier mate.”

Two months passed, then Milky received a call on his cell phone which he had even though he was only six-years-old. It was Drake. “I’m coming to Tampa for a show my little dudette, I can hang out with you just like you wanted!”

What happened next Drake was not ready for. Milky had spent a majority of his time developing a high end Chinese buffet, blue prints sprawled all across his bedroom floor. Drake walked into Milky’s room to play Vault 2 on Steam with him when he noticed the blueprints. “Wow my dude, you’ve got blueprints on the floor that’s so sick.” Drake did the two-finger, picked up a blue print, focused on it, then a grin widened on his face. “We need to make this a real thing!” Drake said to Milky.

“No!” Said Milky, frantically covering up his drawings. “It’s just a concept, it’s not ready yet!” Milky jostled by Drake prying into his life.

“Maybe.” Said Milky. “I’ll think about it.” Then there was an awkward moment of silence. “Do you want to play more Vault 2 on Steam?”

“Sure!” Said Drake. “But can we talk more about the Chinese buffet idea in a little bit?”

Milky unplugged the gaming system and walked out of the room.

“Where are you going!” Drake yelled behind him.

“I need to be by myself for minute!” Shouted back Milky.

“Ok fine.” Drake said while Milky slammed the door behind him in another room.

Then Milky got a text. “What’s up? hungry for some Chinese food? ;)” It was Drake. He refused to give up on the Chinese buffet idea.

“Ok, how about this,” Milky texted back. “We have a Fortnite tournament, and if you win 10 games first, I’ll open the restaurant with you, if I win 10 games, I don’t.”

Milky walked back into his room to see Drake had cracked open another Sprite and booted up the gaming system to load a match of Fortnite. After three days straight of playing, Drake won 10-2. “This is going to be great! I can’t wait to be a business partner with you!” Said Drake with joy, going for a high-five.

“But we had a deal?” Drake said meekly. “I came to your house just to hang out with you before my show in Tampa, and you’re not going to let me open a Chinese buffet with you because it’s ’not ready?’” Drake said with air quotes. “Listen kid I’m going to take you to court, you said if I beat you, we would be partners, and I record every conversation I have because I keep my phone on voice memo 24/7 so nobody can lie on me, and now I’m going to use that in court, to force you to open an upscale, fine-dining, six-God-style Chinese buffet restaurant, and frankly I’m getting pissed!” Drake threw a vase across Milky’s room, shattering it on the only window in the room, also shattering the window.

“Get out!” Screamed Milky. Drake’s bodyguard came in and carried Drake out, Drake didn’t say anything to Milky, he didn’t want to give him the satisfaction.

Six months later, coincidentally on the boys seventh birthday, Drake and Milky met in court for the first of many trials, which eventually led to the decision that, “Yes, the little boy must open a Chinese buffet with Drake.”

Milky cried in court and the courtroom artist painted it, and it’s on TV now. The “6ix Buffet” will officially open on 6/26 because Drake likes the number six.