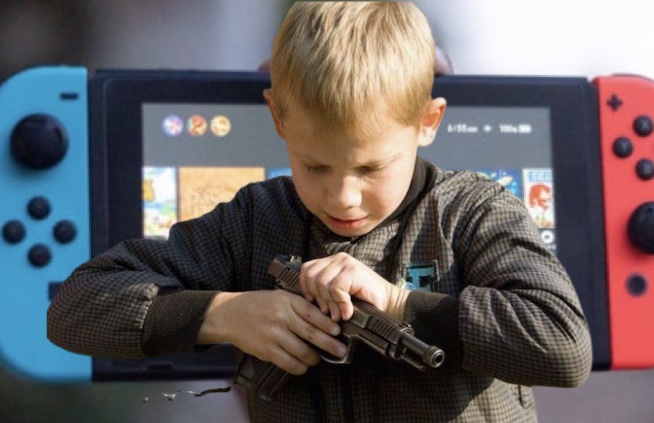 In an event that likely would have ended in violent breaking and entering, 11-year-old Salem Plowers is being hailed as a hero after successfully shooting to death a would be criminal, thanks to the Facebook Marketplace.

“The guy on the internet agreed to meet me to buy my Nintendo Switch,” said Plowers who was sucking on a lollipop when I entered the room, saying this to me before I even asked a question.

The unknown man on Facebook Marketplace was out of cash and Plowers agreed to trade the Nintendo Switch for a Ruger Super Redhawk.

“I was so excited for my new toy, I rode my bike home as fast as I could so I could watch videos on YouTube about taking guns apart and putting them back together real fast,” said Plowers very excitedly.

Later in the night while Plowers was asleep, and his parents were out partying, an intruder entered the home by breaking the back window.

“The man woke me up by yelling that he that he hurt himself,” said the frightened Plowers who then went downstairs to investigate.  The little boy found illegal immigrant and MS-13 gang member, Chad Wolf, clutching to his leg in pain.

Plowers says his parents are mad that he traded the Nintendo Switch for the gun, but they are happy he is safe from MS-13 gang members, like Chad Wolf.

No relation to the Department of Homeland Security guy.

This was a young, possibly Mexican man who had the same name.

Can you believe that? Fucking crazy.

Two people with the same name and totally different backgrounds.

Dead MS-13 gang member, and not the homeland security guy.

Florida Governor Ron DeSantis has announced he is giving the Florida Medal of Outstanding Patriotism to Plowers.  The ceremony will be held live later this week on Zoom.

Attendants can register now to have their virtual faces displayed on the new Florida Monitor Wall of Justice, a brand-new interactive town hall DeSantis will use to deliver messages.

“Through the power of VR, you can watch me give a little boy the trophy he deserves for making our country great again,” said DeSantis in a prerecorded hologram message I watched on my Apple Vision Glasses.

It’s a prototype VR headset from Apple that I have access to, and I’m transmitting this message from the future.

If you can’t reach him, please keep calling him and tell him that Tampa News Force needs his semen sample to prove that he is not a vampire.

Please, email it to his team if you have to.

Our future depends on it.

You are our only hope.