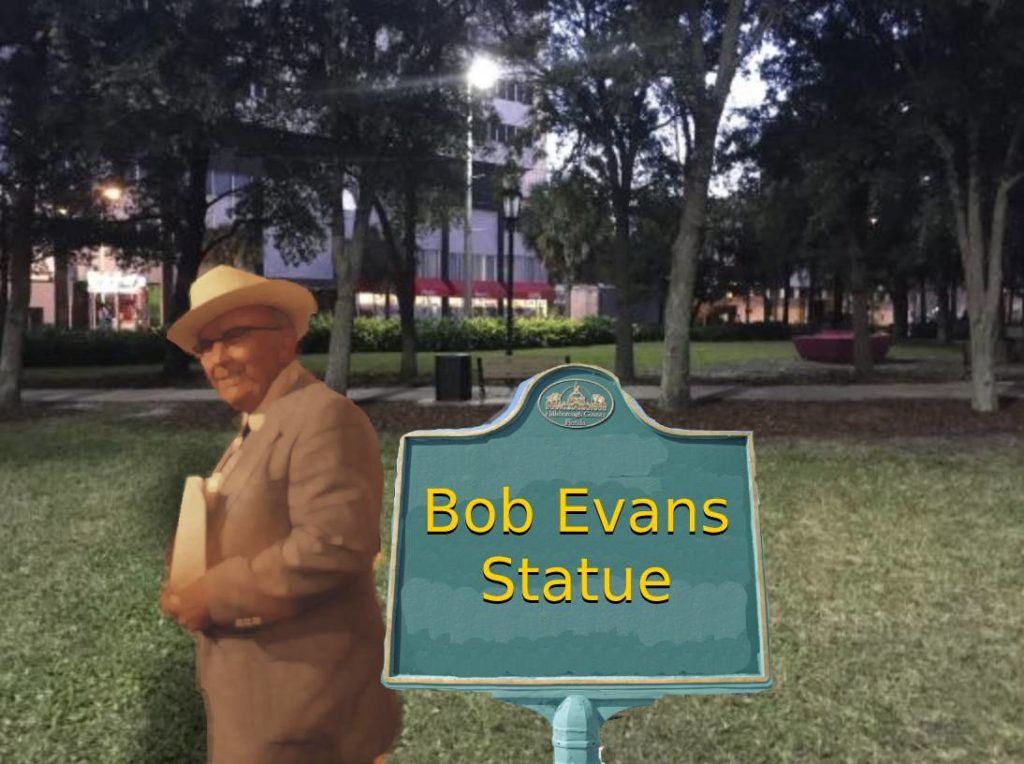 In a bizarre twist of events, local city council members have unanimously voted to erect a Bob Evans statue in Lykes Gaslight Park in Downtown Tampa.

“They were all yelling, then at one point they got quiet, then some weird laughing, and then now there’s a bill to raise a 45-million-dollar marble statue of Bob Evans in the middle of the city.” Says intern Billy James. “They were all hungry, they weren’t agreeing on anything, something came up about the relocation of some sort of statue and they argued at first, but then yea, I don’t really know what happened, but now there’s going to be the statue.” Billy seems very self-conscious.

We try to walk through the front doors of City Hall, but are immediately blocked by a security officer, “You comin’ in to talk about the Bob Evans thing? Nope!” He shoves us to the ground with one hand. A protestor with a pink vagina hat helps us to our feet. “Those plutocratic bastards were hungry and made some weird sick joke-pact to erect this STUPID statue of Bob Evans, the guy who made the fast-food breakfast place.” She takes her shoes off, “Ok, maybe it’s not fast-food, it’s like a diner-esque-type situation, but the food isn’t that great, I’ve had to complain numerous times there because they messed up my very reasonable custom order, I just wanted the avocado juice toasted and smoked,” she throws her hands up, “but that’s besides the point.” She snorts and pushes her glasses back up while shaking her head. “Right wingers. Jesus Christ.”

I stand on my buddies shoulders so we’re tall enough for me to barely climb through a half-opened window. I crawl for a few minutes around a hallway until I hear the loud steps of a powerful woman in heels. CLACK, CLACK, CLACK, CLACK, I hear them coming closer and closer. I’m now curled int he fetal position, I look up and open my eyes to see a woman in an all-black pant-suit, who’s the scariest and hottest person I’ve ever met in my life. “What the hell are you doing in here!” She screams as she lifts me off the ground with one arm. “I’m sorry, I just wanted to know what was going on with the Bob Evans statue and why it was being erected!” I yelp.

“The statue?” She says. “Oh!” She drops me to the floor and starts laughing.

“We’re building the statue because that guy over there forgot to bring breakfast.” She points to a very handsome man in a similarly deep-black ensemble. “Each meeting one of us has to bring breakfast, it was his turn, he forgot, we argued, we threatened to shut everything down and burn it to the ground, but then we remembered we’re all rich and powerful and decided lets just go to Bob Evans, and to remind us of this omnipotent lesson, lets erect a statue in the name of whoever Bob Evans was for bringing us together over his deliciously affordable all-day breakfast options.” She starts dusting off my shoulders. “Get yourself together kid, and get yourself some Bob Evans.” She begins walking away, CLACK, CLACK, CLACK. I shout to her, “Hey, what’s your name! So I can quote you!” She whips her head back flashes me a look of dominance. “You can call me…. Council Woman!” A bolt of lightning flashes inside, I fall to the ground blinded, I open my eyes and she’s gone.

The statue is expected to be erected whenever the funds are formally collected at whatever time the council sees fitting.