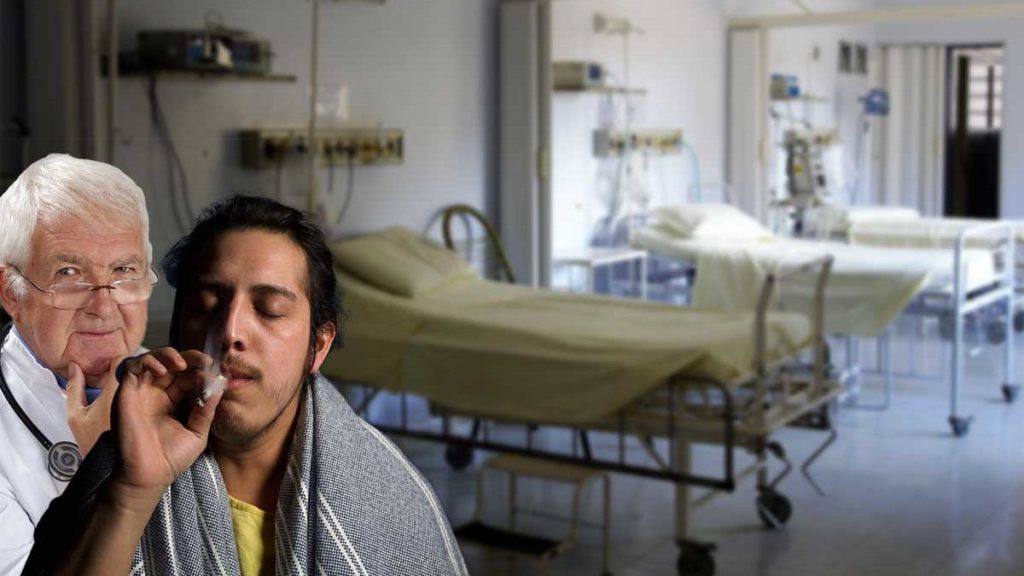 A Tampa doctor has been detained after forcing a patient to smoke marijuana. Buck Redner was sitting in his doctors office Sunday afternoon when the doctor prescribed Buck a daily regimen of inhaling cannabis smoke.

“He told me I needed to ‘smoke weed’ then said he ‘sold’ and that I needed to now buy some weed from him in that moment.” Redner recalls. “He said ‘yea, that’s definitely back pain, now smoke this weed.’” Buck shares. “I knew something was off when the office was in his dad’s house, and nothing seemed to be where he thought he left it, then once he tried to force me to buy weed and smoke, I was like ‘f*** this,’ and I knocked him in the nose.” Buck punches the air to emulate the hit. “One little knock, knock, knock on his fake doctor nose, and I was out of there,” Buck laughs. “Didn’t pay any premium!”

The doctor, whose name is too hard to pronounce even in writing, like it’s so complicated we’re not even going to try, lots of Z’s with lines through them, vertical lines, through the Z, is facing potential disbarment, as his behavior is considered very unethical.

“Sadly it turns out he’s a real doctor,” Says Buck, turning around in his bean bag chair, looking up at me. “So I’m going to jail.”

“That sucks Buck!” I say, immediately laughing afterward as I catch the coincidental rhyme scheme I unknowingly uttered. “It’s not funny.” Buck says, then he picks up a shotgun and blasts at my chest narrowly missing me.

“Uh oh the walls just went black!” I shout. I realize I’ve smoked salvia again while writing an article. “Uh, oh, this is about to get really crazy!” I announce, and not in the good way.

“Oh no, I think I smoked too big a bowl of salvia this time!” I think. Then everything just starts changing, like really fast. Fluctuations of light and color. Waves. Everything feels all wavy and warm inside. SIKE! OH NO! It’s actually turned bad. All that good stuff you were thinking before? Welp, I’ve got some bad news. It’s gone the other way. That’s right, the stock is down. What goes up must come Dowwwwwwwwwwwwww and then you fall into a black pit, nothing around you, just dark blackness and you can’t see or hear anything, it’s just you floating, and you start to scream but nothing comes out, and you can’t move either, it’s the worst of both worlds. All the senses are completely attacked, and nothing seems to be moving in earth physics like you’re used to.

Never mind I’m totally fine again. Anyways, the doctor who forced his patient to smoke weed. He uhm…. Got the death penalty. Yea, that’s what I’m going with. Because it’s a jab at the legal system and how they over-punish people who get caught selling weed. But I guess that’s not really a great joke either because the doctor aggressively forced the patient to smoke weed in this fake hypothetical. I’m sorry I got in a car crash last night, my neck hurts, I just got back to this article and it’s way to stupid to salvage. Sorry for wasting your time on this one. I’m going to chalk it up as a loss. Maybe we’ll get em’ next time. That’s what you’ve got to believe right, that next time it’s going to better? If you don’t believe that, then what’s the point? Is TNF over? Sound off in the comments about what you think. And be honest, I can take the criticism. I like it. It makes me feel alive.