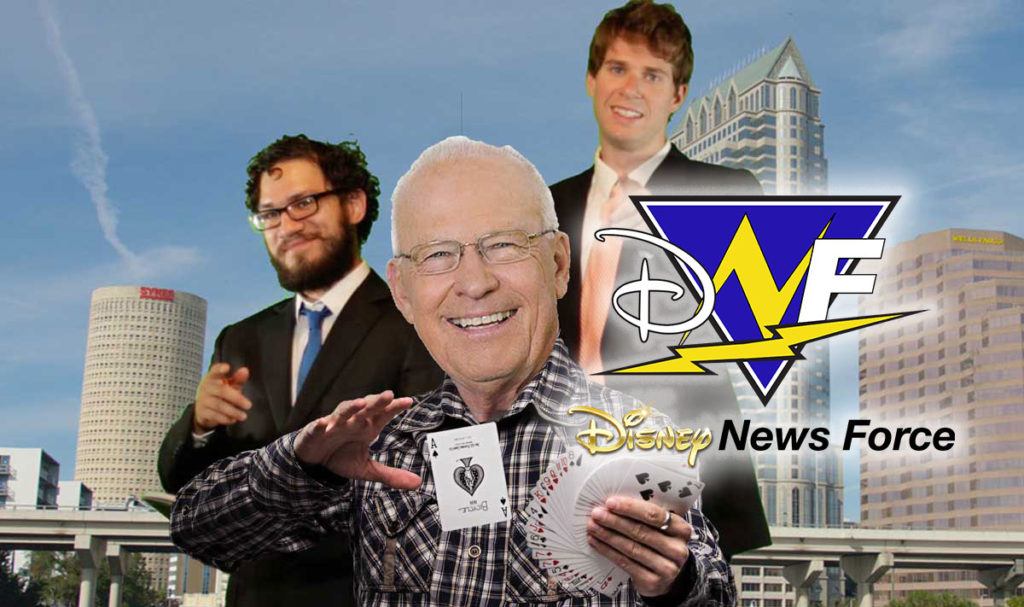 In an unprecedented move, Tampa News Force has bought the Disney Corporation straight out with cash during a mob-style meeting that lasted about 30 minutes in the Deltona airport.

“Let’s just say I had some compromising material against them!” Said Tampa News Force Shadow Owner, David Straz. “Me and Walt go way back, we used to do a lot of questionable things together and lets just say I kept some photos of us doing some things in a place which I won’t disclose!”

Straz’s brevity and confidence lead us to believe the damaging material must have been very powerful, seeing as Disney is a multi-billion dollar company and Tampa News Force currently isn’t turning a profit.

“I’m very upset about the deal,” said former owner of Disney, Pip Chipton. “We just got all the Marvel guys, we have all these new Star Wars parks opening, and you’re telling me I have to just step down and let this old man take over because he has a couple black-and-white photographs of Walt doing ‘something’ that I’m not allowed to even see? In fact, no one on our former Disney team was allowed to see the picture. The old man was so convincing, and we’ve heard enough stories about Walt to assume whatever he has is legitimate, and it was time to fold the company anyway. We knew it was only a matter of time before Diz was exposed. That’s what we call Walt around here, ‘Diz.’”

The acquisition of Disney has helped the Tampa News Force brand majorly, as the company has gone from a hyper-local satire website to a gargantuously influential media conglomerate with reaches in every stage of current civilization.

“We’re not sure what’s going to happen,” said a group of Tampa News Force reporters that were all alarmed when I opened the door. “We just stay here until Straz sends us out on assignment.”

One of the reporters was passed out in a corner and turning blue in his suit.

“Yea, he’s fine, he does the weather, he was huffing paint.” One of the reporters said.

I exited the reporter dormitory to discover that the rest of the Tampa News Force Headquarters was nothing more than a house. There was a living room, a kitchen, a bedroom, and another room that was converted into spare bedroom.

“This is it?” I said to no one. Another person appeared in the room. “Whoa! You scared me!” I screamed.

The person was not like a real human, sort of like a messed up science experiment dog-thing, and kind of cute but also very scary and disturbing.

“Are they keeping you here?” I asked the dog creature.

“Ruff!” It shouted in a happy manner.

“Do you want to leave?” I asked before the creature nodded its head.

I opened the door and it sprinted out, tearing through the yard and on to the street and down the road before disappearing down the block.

“Did you just let my dog out!” Shouted one of the reporters, who was entering the office.

“That was a human!” I shrieked.

“Ugh, no! It was a fetish thing! That’s my boyfriend, we dress up and have dog-play. You just ruined it because he gets in character, and now that he has escaped he won’t come back for weeks. We get hypnotized before this, and if I don’t say the magic words, he’ll stay entranced until he starves and his brain kicks back into normal-mode!” The reporter said to me in a smug way.

“Do you want to get used to this?” The reporter asked while advancing towards me.

“No!” I screamed, then I kicked him and ran out the door that I came in through. When I got outside, I watched as the sky turned purple. “Oh no, something is way off!” I said. “This is not right!” I continued. “Noooo!” I howled.

The sky fluctuated and waved as if time and space were malfunctioning. My legs became light, and my whole body began floating upwards, I screamed in terror as I tried to grab anything on my way up, but nothing was within reach. I continued to accelerate, sucked up into space, squealing in horror the whole way up.

I got into deep space, so far away that I couldn’t see the earth anymore, or even any stars, it was totally black and I couldn’t hear or breath or move, but I wasn’t dead. It felt like I was dying, but it didn’t hurt, I just felt completely paralyzed with the overwhelming acceptance that my reality was over, and I was now subject to whatever follows conventional living.

I finally reached a glowing, gleaming, white metal platform with slow rolling fog pouring from a rectangle opening of light.

It was a door, I stepped through slowly as the sound of church bells and a beautiful choir got louder.

I fully stepped through the door and was now in what looked like a church, except it was really comfortable. The pews were nice and wide, everything was upholstered with suede and there was a giant luxury buffet style dining island along with what looked like a never ending row of taps of every beverage I had ever heard of. There was a giant shining Tampa News Force logo in the center of the church hanging above everyone, slowly rotating in all its glory.

I began walking towards the buffet and I stopped myself dead in my tracks.

“I’m on salvia!” Suddenly I’m snapped out of it, and I realized I was in the Tampa News Force reporters dormitory, and the reporters were passing around a pipe.

The group of reporters started laughing and continuing to hit the pipe.

“So I’m smoking a spice blunt?” I asked.

“The things I do for journalism.” I said as I pulled my shades up and laughed. “You guys have been cool, thanks for the story.” I got up to leave the reporters dormitory.

“Where do you think you’re going?” One of them said to me.

“You are home.” The reporter said. Then I look closely, and everyone in the TNF dormitory looked just like me. It’s a million me’s.

“What paper do you think you’re writing for right now John!” one of the reporters shouted at me.

“Exactly! Snap out of it!” They all swarmed me and began shaking me violently.

“WAKE UP!” They screamed at me. “WAKE UP FROM THE NIGHTMARE!”

I woke up in my bed.