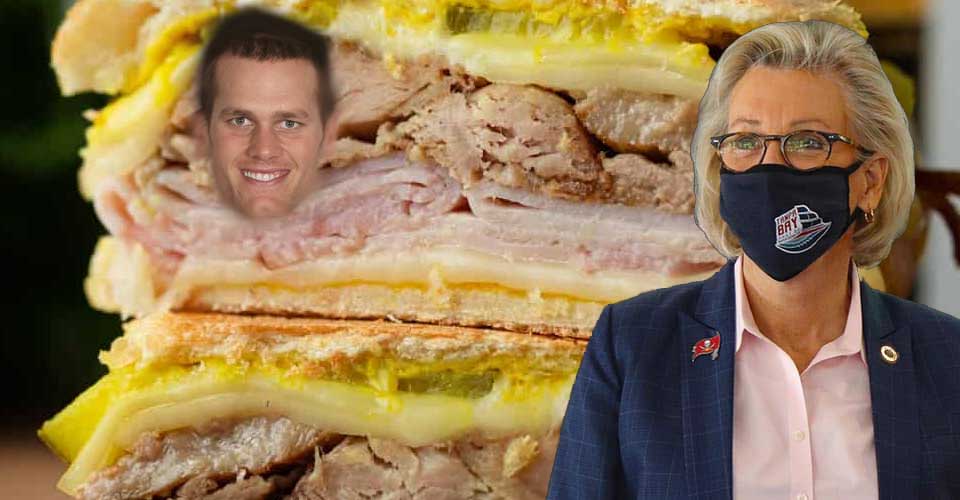 “We want to commemorate this momentous occasion by making some changes to the Cuban Sandwich,” said Mayor Castor during a press conference at Café Hey, a small espresso bar and sandwich spot just outside of Downtown Tampa.  “From now on, we will be renaming the Cuban Sandwich and changing the recipe to include 7 different layers of meat, one for every championship that Tom Brady has won.”

All the employees at the café looked around, confused at what Mayor Castor said.

“Just know, the Tampa Cuban Sandwich will be just as delicious as ever, but it will now include four mystery meats and massive globs of Mayonnaise,” Mayor Castor continued.  “There will also be some surprise layers that we can’t tell you about just yet.” She winked.

As part of the renaming, every business that has a sign that reads ‘Cuban Sandwiches Sold Here’ will be sent a sticker to replace the words ‘Cuban’ with ‘The Tom Brady Meat’ and they will also be supplied with the mysterious meats that will be included with the sandwich.

“This is sure to be a delicious revamp that will not only recognize the history of the cigar workers that built this city, but also the football tossing abilities that keep this city relevant,” continued Mayor Castor, who ended her press conference by buying a coffee at Café Hey and not leaving a tip.

Mr. Tompa Bay himself was not in attendance at his sandwich naming ceremony.  When reached out for comment, Brady said he was excited to hear about the sandwich but announced that he himself would never eat it because it has cheese on it and he hasn’t had a slice of cheese in almost 20 years.