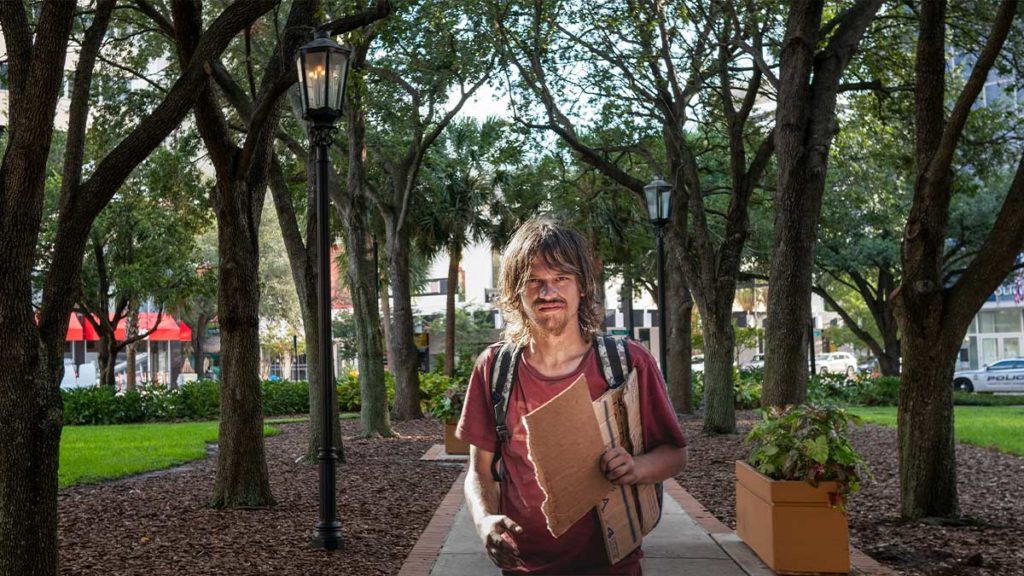 The city of Tampa was recently honored as the best city to live in without a home in the latest issue of Homeless By Choice magazine.

Robbins is part of a growing trend of young homeless people who are escaping the non-stop work cycle to live a net-zero life on the streets.

“I wanted to keep more of my money, or at least the little bit I had and invest it on myself,” said Robbins who now calls the dumpster behind the apartment complex he used to live in, home. “I get everything I could ever need by just hanging out here all day.”

Homeless By Choice magazine looked at the number of high paying jobs in Tampa and realized only 10% of the people working could afford to live comfortably.

“Our metrics indicated that an able-bodied person would need to work 198 hours a week at minimum wage to be able to live and party in Downtown Tampa.” Said Homeless By Choice magazine editor Ulberto Sonicfan. “Using this data we have decided to start a campaign to get everyone to quit their jobs and live on the streets to begin a new work free society here in Tampa.”

Starting December 1st, every person who has a job in this city is being urged to quit and run naked through the streets begging for money.

“If enough people are running around naked asking for money, then we all succeed,” said Sonicfan who was talking to me while undressing.

I asked him how this plan would work, but by the time I finished asking my question he tackled me to the ground and began undressing me.

After playfully wrestling him, we decided to combine our incomes and find a nice luxury apartment and move in together.

Homeless people in Tampa are being urged to do the same, or risk living paycheck to paycheck.