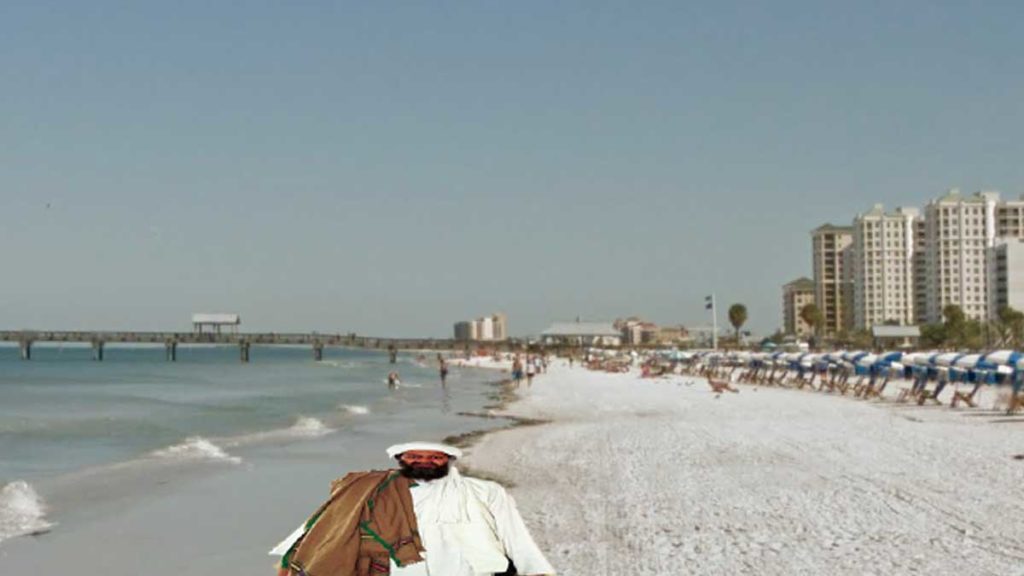 The corpse of the terrorist leader behind the 9/11 attacks washed up onto Clearwater beach Saturday morning, causing a stir amongst beach-goers. The body was easily identifiable from the bullet wound, and the unique look and size of the carcass. The body was found when a little boy walking down the beach cried, “Mommy! Mommy! Is this the dead body of Osama Bin Laden?” And after closer inspection it was unanimously agreed that this must be the body of Osama Bin Laden.

“He was buried in the ocean right? That means sooner or later he was gonna wash up somewhere! Happy it was us!” Said Bruno McDanielson, Clearwater resident, slapping his belly, flapping his wet tank top.

“I guess this is proof we really killed him right?” Bruno said.

“No more speculation on whether or not he was actually killed or why he orchestrated those attacks, despite his background with the United States and his wealthy family. It’s all gone! All doubt has been washed away, just like Osama B.L.’s body!” Bruno yelled before misstepping onto a loose slice of pizza stuck in the sand.

The body is official property of the church of scientology now, as the part of beach that it washed up to is owned by the church. The U.S. government will make no attempt to reclaim the body as they have stated they are, “Scared” of the church of Scientology, and would rather not get involved with them.

“They’ve taught Tom Cruise how to move objects with his mind.” Stated the official government document.

No plans have been made public as to what will happen to the body, but it’s being considered as the center-piece to a new beachside diner, titled, “Ol’ Samma’s Beach Bar.” Which would feature flare from the famous raid on Osama Bin Laden’s compound, which left him dead.

“If we could embalm his body in something that could hold up, maybe we could dust him off and put him leaning on top of a pirate ship or something, pointing to a Bucs flag or something.” Said restaurant venture capitalist, Keith Rennington.

“I know if I could open up a pool-side grill with that butt heads body perched up, we could draw in some patriotic patrons.” Rennington said.

The beach was temporarily shut down while the body was moved to an undisclosed location, and things were back to normal in under 15 minutes.

← Sweet, innocent children losing faith in the institution of journalismTampa voted best city to be homeless →