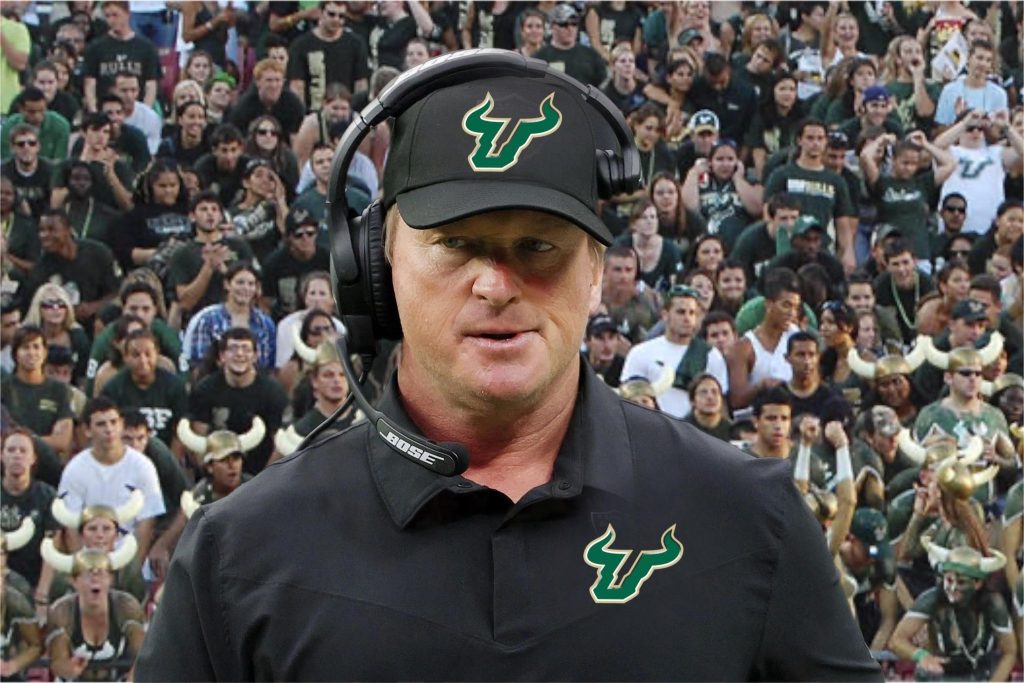 The other day, The Daily Stampede, SB Nation’s blog devoted to comprehensive coverage of the University of South Florida’s (USF) athletic programs, published an outstanding piece by Robert Steeg on how the idea of hiring former Tampa Bay Buccaneers head coach to take over as head coach of the USF Bulls is such a ridiculous premise that it shouldn’t even be considered.

It’s thoughtful, well-researched and presented clearly and concisely. All the points made are correct. It’s an excellent article. It’s also wrong.

Yes, it is possible to be correct and wrong at the same time. Allow me to illustrate…

Here are Mr. Steeg’s arguments, reduced to bullet points for the sake of brevity:

Again, all of these points are valid and factually correct. Now, here’s the argument that trumps all of them:

That’s not to say he’s a man of high character or even that he’s a good coach. But he’s a charismatic personality and people pay attention to him. He’s a perfect fit for a program that currently exists in the foggy ether between irrelevant and non-existent.

The fact of the matter is that outside of the dedicated faithful Bulls fans, USF Athletics has no measurable, meaningful presence among sports fans, or even people with discretionary income who are just looking for something to do. Including right here in the Tampa Bay Area.

Sports are supposed to be any number of metaphors for other things in life. More than any of those, they’re supposed to be a form of entertainment. USF Football is not entertaining. Watching, listening to or, God forbid, attending a Bulls game is a joyless slog, more akin to a chore than a game.

Game /ɡām/ (n): a form of play or sport, especially a competitive one played according to rules and decided by skill, strength, or luck.

– What the USF Football experience is not

Here’s a brief history of USF Football, once again in easy-to-process bullet points…

Many USF Football fans, and there are many or there probably wouldn’t be a Daily Stampede (at least year-round), seem to cling to some provincial purist ideal that the program is on the right track and only a couple of correctly-taken steps away from glory and that hiring a sideshow attraction of a coach like Gruden will not take the Bulls in that direction. They’re right about that particular aspect but they’re wrong about the path the program is on. The fact of the matter is that right now, USF Football is bad, boring and basically rudderless. There is no direction, unless you consider that drains circulate clockwise in the northern hemisphere.

This is being written on Thursday, November 10. By the time it’s published on Saturday, November 12th at 5pm, it’s safe to predict that the Bulls will have lost by about 20 points, possibly more, to Southern Methodist University at Raymond James Stadium earlier Saturday afternoon, a game that might have been somewhat competitive until halftime before the inevitable outcome, resulting eventually in a record of 1-9.

Would Gruden whip off his visor and throw it at someone in frustration? Possibly. Would he have a racist incident right there on the sideline? Maybe. Would he snarl and sneer his way through every post-game press conference? Almost certainly!

None of that would advance the football program or the university itself, but damn, it would be good tv. It might even make the radio broadcasts listenable.

Yes, Mr. Steeg is correct in stating that the idea of hiring former Tampa Bay Buccaneers head coach to take over as head coach of the USF Bulls is such a ridiculous premise that it shouldn’t even be considered. And that’s exactly why it should be considered.