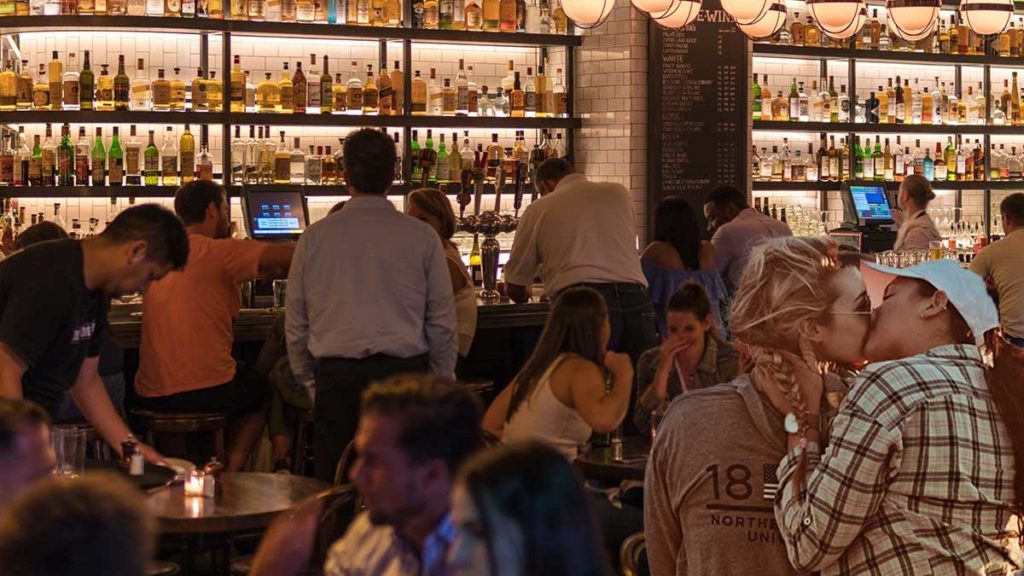 There are many great gay bars in the Tampa area. Today we want to take a look at the least gay gay bars for people who want to ease themselves into gay bar culture.

While most people think this is a straight bar because of the amount of breasts, it’s actually an undercover gay bar. The gay men are using the hot women to throw off the scent of anyone discovering that they’re gay. Not that they should have a reason to hide their sexuality, because the world is a more accepting place and it’s up to us to make everyone feel safe and comfortable, it’s not up to us to decide when people want to share their sexuality with the world, and if it’s their secret, it’s their secret, so if they want to meet in a Hooters so nobody knows they’re gay, that’s fine. Whatever they’re comfortable with is good. No one should feel pressure to explain themselves or their sexuality to anyone if they don’t want to. Also, this place has nice decor and is very upbeat, so people are in a good mood, so there’s less chance of binary aggression. Cisgen’s are in a state of arousal and are on their best behavior. Or their worst depending on how many pitchers they’ve had in them.

This is a swingers night club where people have sex inside. It’s like a night club, but you can go have sex with people if you want. This is the perfect place to feel like you’re at a gay bar with minimal gay bar vibes if that’s what you’re looking for. Again, I’m not sure why you’d want to go to the “least gay gay bar,” but I’m not here to judge. If you want to go to a gay bar, but you don’t want it to feel “too gay,” that’s your choice and I respect it, and it’s not my right to judge or feel the need to comment, and I don’t. Everyone’s sexuality is different and unique and society will continue to progress towards total equality one swingers night club at a time. It’s a great time if you’re looking for great times. Definitely pop by this place if you’re looking for an authentic Tampa experience in a moderately gay setting.

Now I know what you’re thinking. “Applebee’s isn’t a gay bar, this can’t be the case, I’ve never noticed.” Well history shows that Applebee’s was actually a pioneer when it came to the gay bar industry. Daniel Apple was actually one of the first openly gay men who served moonshine out of his broken down trailer on the side of Belly Bee road in West Tennessee. The local gays would shout, “you goin’ to Apple’s on Bee later?” And eventually it was shortened to Applebee’s, and it to this day remains the most prevalent secret location for homosexual expression, so if you want to go to a gay bar, but don’t want it to feel like a gay bar, go to Applebees. Daniel Apple would smile.