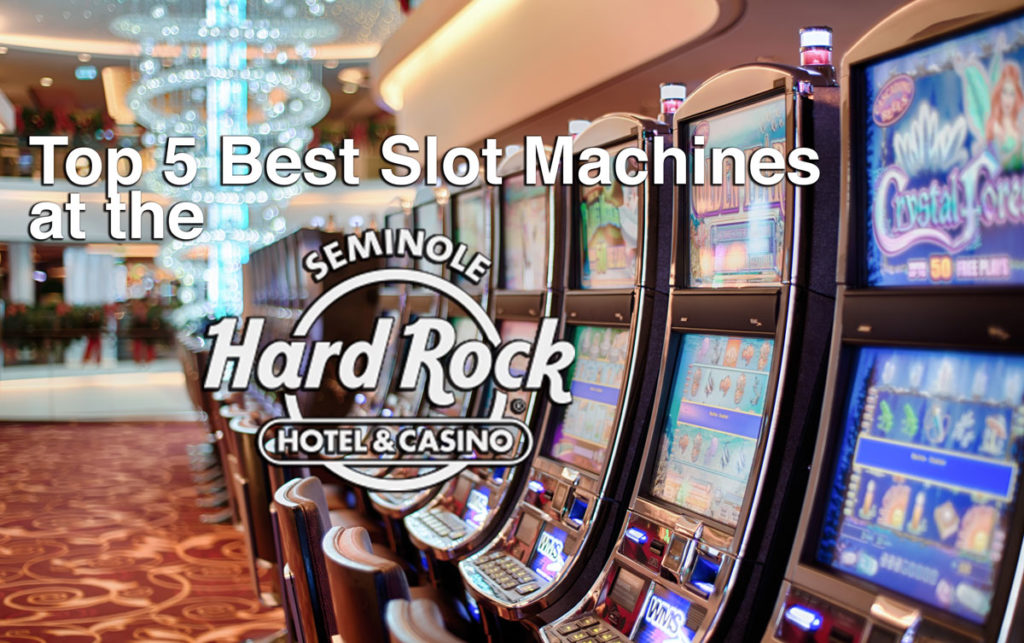 The Hard Rock Casino in Tampa is one of the biggest in the world thanks to its wide assortment of slot machines. Tampa News Force went ahead and tried all of them and ranked them here, for you:

Normally I’d say stay away from the movie gimmick machines, because they’re usually the worst paying ones, because a good chunk of that profit is going back to the original Willy Wonka creators, so to maximize the casinos profits they tweak the algorithm to decrease chances of winning, because it’s a computer, and it’s not actual reels like the old days, these are just programs running in the matrix, and the winning ratio doesn’t need to be legal because the casino is on Native American land, and they don’t have to follow the exact gambling rules of the U.S. they even have their own police and jail on that land, it’s not a place that has to abide by our rules, this is their reparations, taking money back from the people that kicked them out of their native land. And is it morally right or wrong? I don’t think we have the right to decide. Anyways, the Willy Wonka game has a bonus “price is right” style Plinko game called “Wonka Winko” and it was quite fun and amusing to play, definitely a rollercoaster ride of ups and downs, hundreds of dollars, so if you’re ever staying at the Hard Rock, try to make it down to the first floor where the casino is, and bump into this machine. Toss it at least a $5, I promise you won’t be disappointed.

Spartacus is a lightning fast, double-wide reel slot machine, where the Spartacus Wilds from the left reel carry over to the right reel after the left reel has stopped spinning, giving a great potential to maximize your profits! All you need for the special free bonus spins (with locked wilds and more top profit reels) is 3 colosseums, and with a total of 6 opportunities to get the bonus (as the colosseums only appear in the first, third, and fifth reel (in each of the two windows of reels)) you can potentially get 6 colosseums, resulting in upwards of 20 “free” bonus spins where the minimum of 8 will be awarded upon the locking in of 3 colosseums. Also, this one is a personal favorite because I went to the University of Tampa and we were the “Spartans” so to see a bunch of pictures of Spartans reminds me of being in college, a younger more innocent time, where I would go to the casino much more! Literally my first day of college at the University of Tampa, I went to the casino during lunch, just because I couldn’t believe I really lived this close to a casino. I loved gambling! It started when I was a child and won $75 on a scratch off. It was the coolest way to get money ever. Free money. “Winning.” For no reason. Anyways, Spartacus is a great game, located in the middle hanger, off the $20 black jack tables, near the Council Oak steakhouse restaurant. Definitely worth putting a full twenty in just to chase this bonus. Definitely a sight to see, win or lose.

If you’re looking to score big in beautifully serendipitous ways, this is the game for you! With a truly divine-intervention-style, scattered-wilds random-bonus, this game has “magic bubbles” appearing in the foreground of the underwater ocean themed reels, making their way up one row at a time, maximizing your time with the wilds in play. And let me not forget to mention, that other random bubble images appear in reels, and when a “magic bubble” lands on one of the bubbles already in a reel, that bubble then expands to cover 9 total squares, causing huge potential for staggering gains, also, there’s a 3 treasure-chest bonus which triggers free spins if you can lock down 3 treasure chests. Treasure chests can exist in play while a scattered or expanded wild lands on the same space. The visuals aren’t too mind blowing, and the audio isn’t particularly entrancing, but the action is pretty fast-paced, and the colors and background are relatively calming, as if you’re under the ocean, so it’s pleasant. If you like to take your time with games, this might not be the game for you, as the play, depending on your luck, can be quite thin. You might need $25 just to see some real action. Not for the faint of heart gambler, definitely for the passionate reel-roller.

Pick your fate! This classic style 5×3 reel gives you a sense of the original slot machines from the dawn of casinos with the first attempt at a modern twist. This is a digital slot, however it’s one of the very early ones (at least in my lifetime) so it’s staying true to original slots, while also offering computer animation, adding a new layer of action players had never previously encountered. The bonus on this one is a gold old fashioned game of chance. Upon locking down three jade elephants in reels one, three, and five, you’re awarded 3 picks in a giant room full of jade elephants, each containing a different prize. The elephants are full of additional free spins, locked wilds, more picks, and straight up cash. After you pick the elephants, you get free spins, with the prizes you picked added onto the bonus. The overall theme is Asian however it may be a little over-stereotypical where instead of being a respectful homage, it’s more of a cultural appropriation. The narrator sounds like she can barely speak English, which I’m not sure was a conscious choice, and I can’t tell if it adds to the spirit or makes it feel offensive. You be the judge! Toss this one a solid $40 and let the good times roll!

This one’s got it all! Beautiful women, an amazing landscape, a festive mood, cinematic score, exciting graphics, edge-of-your-seat suspense, bright lights, colorful action, it’s a modern marvel, and truly a piece of art in every sense of the word. It takes all of your money savagely with no remorse, in the most immoral fashion, and leaves you begging for more. It’s sadistic. It’s mastered the art of stealing from you and having you thank it for the good time. People line up on the other side of the slot isle, again, off the $20 black jack corridor in the center hanger, just to take their swing at Heidi. Heidi’s can stack up entire rows at a time, and 5 Heidi’s within the first 3 rows trigger the bonus, where you can win up to 50 free spins with the presence of 15+ Heidi’s! The more Heidi’s on the screen during the bonus trigger, the higher your free spin count is. Also, if you get a Heidi with a red background during the initial bonus triggering, you get a spin on the big wheel, which will be another perk added on to your free spins bonus. The big wheel spin contains more spins, mini jackpots, and “Hans Spins” where Heidi’s accomplice, Hans, jumps out to scatter wilds on 3 of the bonus spins. It’s very lackluster and frustrating when you’re awarded Hans spins, as it rarely pays off. However, everything in the else in the presentation is so powerful that this game keeps pulling us back in, over and over again. And when I say us, I mean whoever I need to go with, because technically, I’m banned for life from the Hard Rock Casino when I signed myself up for the self-exclusion program back in 2015, meaning I’m never allowed to set foot on Hard Rock Casino property, or I will go to jail for trespassing, however that doesn’t stop me from going, I just go with friends, and I make sure they push the button most of the times, or if I hit a big jackpot I can easily dash while they stay put to collect the prize for me, (even though that never happens.) They let you in to gamble because they don’t monitor the self-exclusion program people, because they want us to keep gambling, they know we will if they let us, so they’re only going to use that power to trespass us if we win big. I can’t remember the exact amount, but I think if it’s over $1,000 or something they need to come out and make you fill out a tax form, and that’s where they would realize that you’re on the banned list and you will be forced to forfeit your money, and potentially face legal action. Anyways, this one is definitely the crown jewel of slot machines as it really does have it all, and it always leaves you wanting more, no matter what your pay out is. Definitely give this one as much money as you can despite the results. If you like to gamble, you’re going to love Heidi.