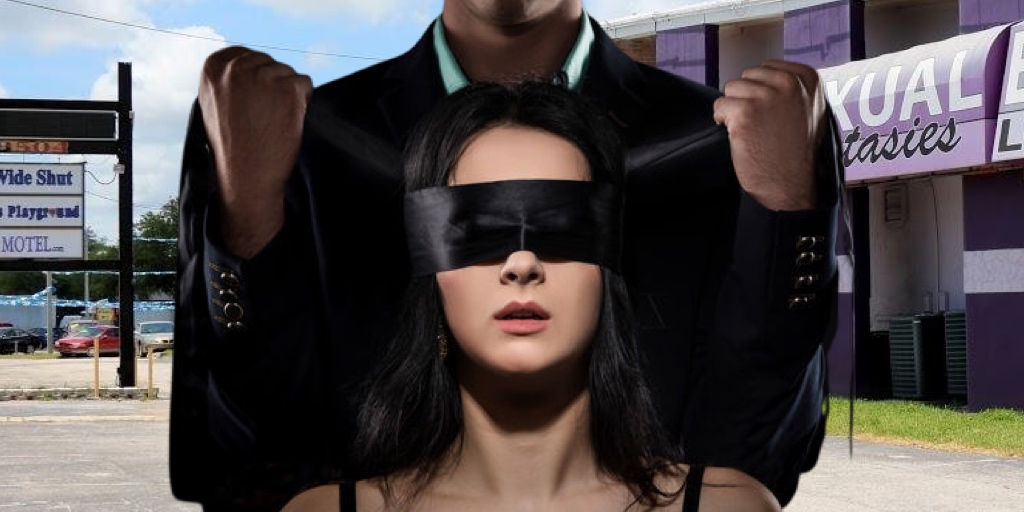 Everyone knows that Tampa Bay is an adult entertainment wonderland. From the many world infamous “gentlemen’s clubs” to the self-storage facilities used for shooting low-budget pornography to whatever the hell is going on in Drew Park (home of Thee Love Shack, Fantasylands I and II, various auto repair shops and daycare centers among other random businesses), there’s something for everyone. But where are the very best places to go if you want to romantically share your partner with strangers? Here’s the list!

This place has everything that Eyz Wide Shut has but with fewer restrictions. That means you can bring in bags! Nobody cares because nobody actually works there. Well, there’s usually a cashier at the front counter, but he or she is just there to make change for the vending machines. They don’t care what you do. (NOTE: The vending machine says it has Coke Zero but it never does. The “out” light is broken or something, but like I said, the staff doesn’t care.)
IS THERE USUALLY A GOOD CROWD OF PEOPLE THERE? Hmm, “good” is a subjective term. Mostly lots of old single dudes. Some of them might be nice.

Brad is this guy who lives between the disc golf course and the old Phillies ballpark in Clearwater. He’ll let you come over and do whatever. Give him about a half hour’s notice and he’ll leave the door unlocked for you. Just slip him a couple of bucks for the hospitality (leave it on the kitchen counter by the toaster oven on your way out). He’s pretty good about staying in his room until you leave. (NOTE: Please stay off the couch or put a sheet down at least; it’s his mom’s.)
IS THERE USUALLY A GOOD CROWD OF PEOPLE THERE? Sometimes. Brad doesn’t really use any kind of structured scheduling system so there’s often some overlap.

It’s exactly what you think it is. There are no amenities. Although, it is behind a pretty good Chinese restaurant ($$) and it’s kind of away from the street so it’s relatively secluded. That’s nice. (NOTE: It gets emptied every Thursday morning around 7am. Prior to that, the smell is pretty intense because it’s where the Chinese restaurant dumps their trash.)
IS THERE USUALLY A GOOD CROWD OF PEOPLE THERE? Yes. Especially Wednesday nights, oddly enough.

This is a family-style, all-you-can-eat buffet restaurant. But I’m pretty sure there’s some shady activity happening behind the scenes. I don’t have any evidence. Just a hunch. One of the servers was extra-flirty this one time I went there. Talk to her and see if you can find out what’s really going on. Her name is Madeline or Patricia or Angie. Something like that. She’s a brunette. (NOTE: The fried chicken is delicious but the skillet cornbread is a real treat!)
IS THERE USUALLY A GOOD CROWD OF PEOPLE THERE? Almost always.