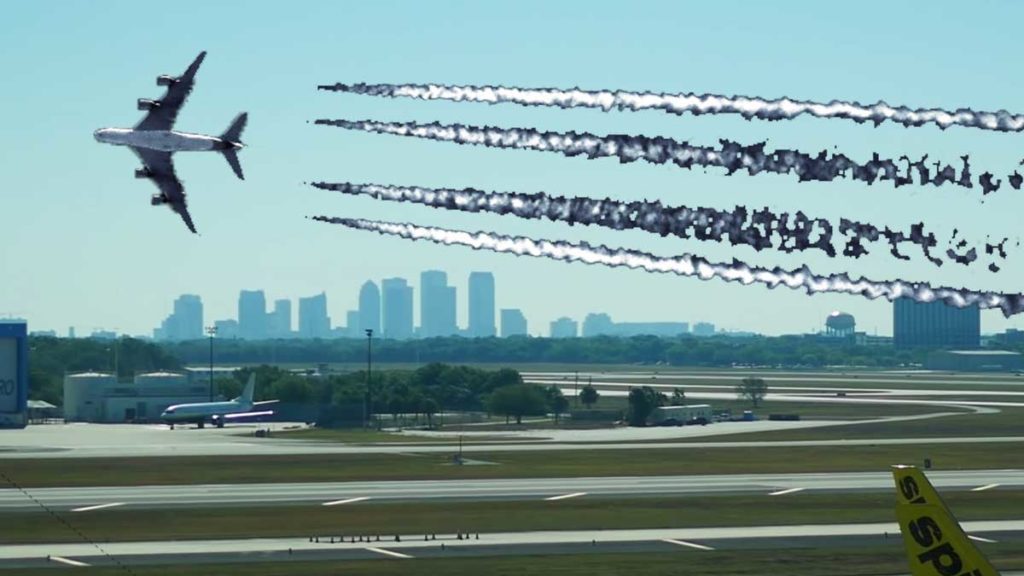 In an effort to control mosquito and lovebug populations, Tampa International Airport (TPA) has announced they have developed a new chemtrail formula that they hope will combat and eradicate the bugs once and for all.

“Dozens of planes fly in and out of here every day,” said TPA spokesperson Wally Wingnut. “Our old chemtrail formula had the unfortunate side effect of making people believe in Scientology.  We hope this new formula will not only kill all the mosquitos, but also get folks to not go anywhere near the Scientology buildings.”

Wingnut then looked around suspiciously and asked, “You weren’t followed here where you?”

“I don’t think I was,” I said before noticing there was a laser pointing at my chest.

“Get down!” Wingnut yelled before tackling me to the ground, saving me from a barrage of bullets coming from a nearby building. “Damn Scientologist must be trying to stop you.”

“Stop me from what? I’m only one journalist, and I barely do my job correctly half the time.” I said, admitting that I don’t do a good job.

“It’s not safe for you here,” Wingnut said before running over to his desk and grabbing a gun from one of the drawers. “Come with me if you want to live.”

I followed Wingnut down a corridor that led to the apron of the airport, where all the planes were parked.  It was late at night and no flights were scheduled to arrive for a while.  In the distance stood a group of people in red and black ceremonial garbs holding torches, humming and swaying in place.

“What do you want from us!” Yelled Wingnut.

One of the torch holding members of the group walked forward, removing his hood to reveal the smiling face of a middle-aged white guy.

“Hey Wingnut, can you start using the old chemtrail formula again? We need more Scientology members for tax purposes.” Said the man before putting his hood back up.  “Because if you don’t go back to the original formula, we’ll come back, and let’s just say there won’t be any warning this time.”

Suddenly a giant beam of light engulfed the group of worshippers and they disappeared.

Wingnut and I stood baffled on the tarmac and I agreed I wouldn’t tell anyone about what had happened or the chemtrail formula.  So forget I said anything.