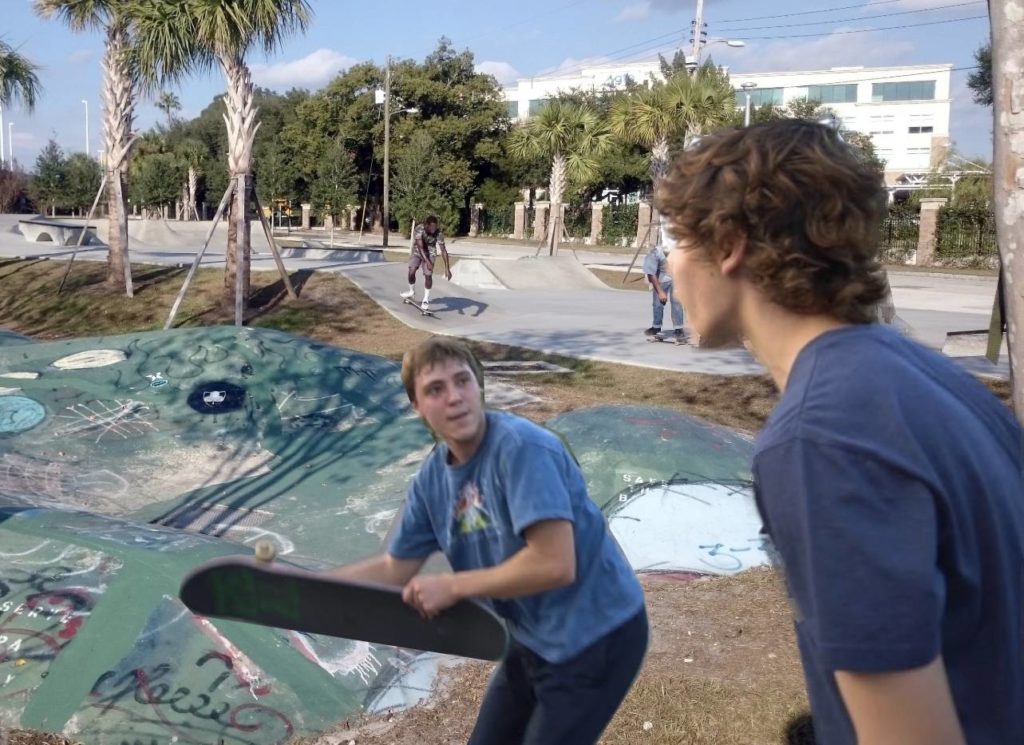 Two young-adults, got into a physical altercation at the world-famous, Bro Bowl skate-park, by Downtown Tampa. “I’ll tell you what happened,” says a boy with red dreadlocks. He motions me to come towards him, however his friend puts me in a headlock from behind which I barely get out of.

A shirtless boy does a laser flip in front of me flawlessly then flicks me off as I continue to ask questions. “I got the answer for you right here!” Says a boy with hair tucked into his shoes. However, when I look down he’s doing the circle trick with his hands, then he punch-slaps me very hard on the back of the neck and says “two for lookin’!”

I begin to shout from the center of the skate park at all the children as they taunt me and circle me. “What happened here!” I scream. They laugh louder. A small boy is able to somehow pull my shoes off my feet without my knowing then throws them up on the power lines near by.

Suddenly a teen rolls up the vert ramp and does a bar-spin, but makes eye-contact with me before he touches back down on the ramp and winks. “Nothing happened man. Who cares?” That’s when it hit me. It doesn’t. I don’t need to be covering child skirmishes with my time. I’m a reporter! I went to school for this!

Immediately the children get silent then look up at the sky and point to what appears to be a glowing disc. “The leader has returned.” The disc gains depth and reveals itself as some sort of space craft. A tall purple thing tumbles down a steel ramp. He’s got wheels on his feet. His hands grow speakers and he begins raising the roof while Rick Ross plays from his speaker-hands. A siren-like noise screeches from the spot you’d assume is his mouth, and the children cover their ears and quickly duck.

I fall to my back and begin screaming and covering my ears trying to escape the wicked noise. “Wake up! Wake up!” A boy is shaking me violently, as the mist begins to clear and I’m laying in a field next to the Bro Bowl. “That wasn’t spice, that was salvia!”

Amid my investigative journalism I forgot I had tried to gain the children’s trust by smoking what appeared to be a spliff, but turned out to be salvia mixed with heroin.
“We trust you, you’re cool man, you’re f***ing crazy man!” They pat me on the back as I sit up and gain my composure. “Well I’ll tell you what happened. Richard hit Lyle then Lyle went home.”

I got the story. Victory was mine. In a time when I thought all hope was lost, the prize I so longed for was finally achieved. The news had been covered.

For any tips on local activities you’d like to be covered, please don’t. We’re fine.