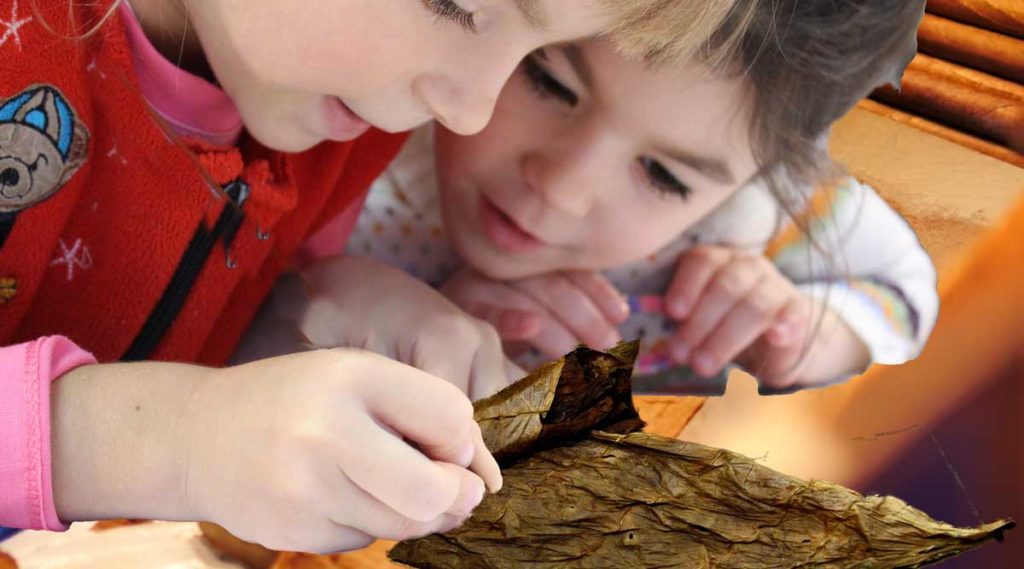 Fat Smokes in Ybor City has begun its ‘Little Wrappers’ annual summer youth program. The program teams up authentic cigar rollers with children to teach them how to hand roll cigars.

“We’ve been doing this for many years,” said Emilio Porkcheez, one of the original cigar-rollers from Fat Smokes conception back in 1950.

“We figure, we’ve got the knowledge on how to roll the perfect cigar, why not share those tricks with the children, and get something out of it!” Porkcheez smiled, laughed and smacked my back as he puffed from his cigar while muffled mariachi music played from a radio hidden somewhere in the store.

“These children, they have such a good time!” Porkcheez exclaimed while a long ash from his cigar fell onto the black and white Italian tile floor. “My mother, she rolls cigars here too, she makes friends with the children, she babysit them when we leave the shop, sometimes she even sneaks them a few puffs off a cigar!” Porkcheez elbowed my gut and raised his eyebrows a couple times.

“Here come with me,” he said, waving me to follow him through what looked like old clothing racks covered in scarves and carpet sections. We arrived in a room full of exotic birds squawking about, pecking at tobacco leaves, flapping their wings, feathers flying everywhere. “These are our rollers!” Porkcheez said proudly. “Do you like this?”

“What the hell is this Emilio?” I asked.

“Our wizard turns the children into birds, and the birds are forced to roll cigars until their little bird wings can’t flap anymore!” Suddenly a wizard came out from inside of a grandfather clock and started shooting short beams of lightning at me, but I was able to bounce them off a mirror and shoot them at Porkcheez.

Porkcheez turned into a bird. I held down the Wizard and started screaming at him to turn the children back into humans.

“Life’s not that easy!” Said the wizard, and he sounded like my dad.

My dad stood up and his wand grew long and pointed right into my neck.

“Now you’re going to be a cigar rolling bird, just like all these other children!” Belted the wizard.

A bright flash of light filled the room, and my dad wizard was on the ground.

A big guy with what looked like some sort of alien gun ran over to me. “John you’re safe now, it’s me!” I didn’t recognize him.

Suddenly the big guy turned into a bird, the wizard woke back up and grabbed his wand. “You fools!” He shouted. “Now you will pay the price for your lack of awareness!” Screamed my dad.

BANG! The wizard looked down to discover he had been shot in the chest.

BLAM! A second shot hit him in the toe.

BLAMMO! A third shot rang out and the wizards wand snapped in half.

“No!” Shouted the wizard.

“Yes.” Said a powerful voice from the back of the room. Everyone including the birds that had turned back into children, looked towards who had just saved the day, and they looked to see, IT’S JOHN CENA!

Cena, who has been known to walk up and down 7th avenue, enjoying life, which is accurately depicted in a commercial he did, had just saved all the children from an eternity of rolling cigars as birds.

The original guy who saved me was now turned back into a human too, and he was like, “Wow, thanks for saving us John Cena!”

And Cena went, “What’s your name!”

And I said, “Yes, Brett!” And Brett seemed pleased by this.

Porkcheez, who was once a bird, is now human again and cowering in a corner trying to hide from repercussions.

“Yay!” Screamed the children. Right as I thought the story was over I caught myself thinking, “Wait, but if all the children were birds, why did Emilio let me in the shop in the first place? Wouldn’t he want to keep me away?”

As Emilio was being carted away to the back of a police car, he slid me a note that said, “It’s much deeper than this…” There were 7 numbers on the back, scribbled in green ink.

“What does this mean?” I thought to myself. “Is there more to the story than just this? Will I ever know the truth?”

Continuation: Turns out there’s no more to the story. There is no truth, Emilio was just a crazy person. Nothing deeper.