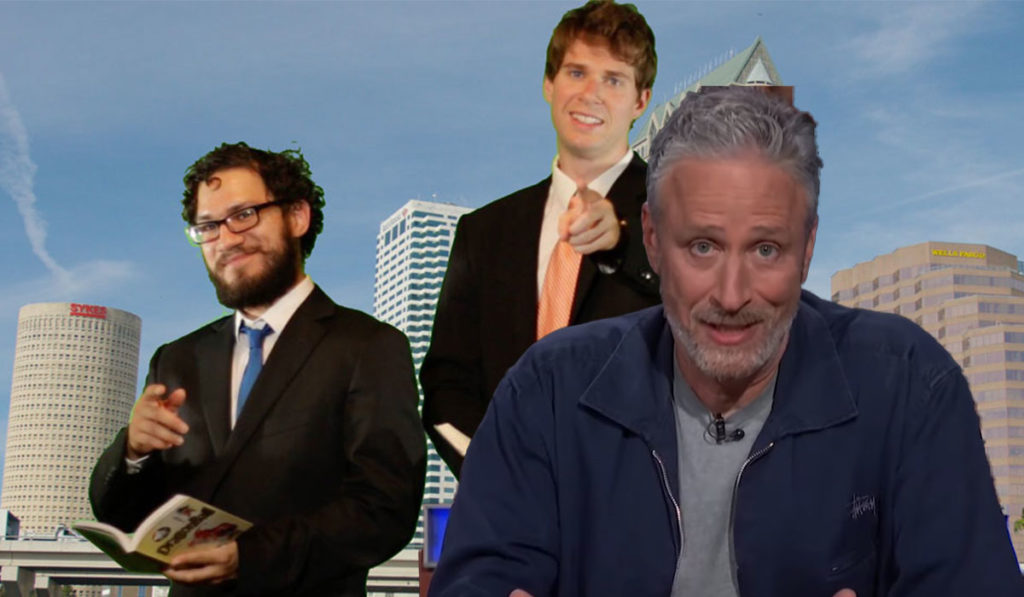 In preparation for his upcoming work with the warrior games, Jon Stewart has become fully aware of Tampa News Force and completely supports their journey for the truth through satire.

“I love these guys,” said Stewart. “I was jogging outside my hotel, and I bump into these two young men in suits with a camera and a mic, interviewing what looks to be a homeless space pimp, and I immediately knew they were on to something.”

I’m sorry I can’t even write a fake article for this one.

Jon, I know you’re reading this, we need to meet and you need to let us interview you on camera. You were a pivotal part of my childhood, along with a direct inspiration for the creation of Tampa News Force. I saw you perform live at Congressional Hall in Washington D.C. when I was 13 with my family. I remember specific jokes you did! Your encore, you flew back in mimicking a plane flying around the stage, landing back on the mic then talking about how you needed to get a new charger for an old cell phone and the store employee chauffeured you around a dungeon stairway in an Igor-style fashion.

Do you think the world would be the way it is right now if you still had a show? You’ve proven the strength of your influence time and time again, and while they call it “fake news,” and strictly “entertainment,” commentary can exist alongside news and in some cases it should. God chose Noah, everyone’s allowed to be a little bias! Journalists should be allowed to publicly endorse people on TV, it’s better to be open about it than subtly dropping nuanced statements peppered throughout weeks of coverage!

Fake news and real news can exist together, in harmony, in a symbiotic relationship. We all win. If you don’t agree with my philosophy, talk to me about it on camera! You’re going to be in Tampa for at least a week I’m assuming, unless you’re flying back to New York between the dates. Also I can get you weed. Let me know Jon! Wait, isn’t that weird, both of our names are Jon! Mine’s with an H, but still! It’s meant to be! Alright, anyways, let me know. Sorry I’m treating this like a voicemail. I may have already gotten into that “weed” I was talking about earlier, *wink* *wink*

Usually we write articles like “Fire breaks out at gator wrestling event,” or “City announces plan to make traffic worse,” or “School teacher accidentally shoots school shooter,” or “Top 5 places to shut the fuck up,” but today this is pretty much an open letter to you, because I know you keep up on the local satire news scene for the cities you visit, and nobody reads this anyways, so it’s not like I’m wasting people’s time by writing a message directly to you. People might read the first paragraph, but that’s about it. That’s why I get so crazy in the last few paragraphs, I’m like “this is the stuff for the nuts who are willing to read 7 paragraphs of a fake news comedy article, I’m gonna get really weird now! I’m not even going to keep using proper grammar rules!” but I don’t want to waste your time with that.

Please, feel free to contact us however is easiest for you because my dad for 12 years has said, “E-mail Jon Stewart! Google it, find out his email, and just email him. Have you tried E-mailing him?” He thinks I haven’t ever tried to contact you or the Daily Show. So if you could give me your email, I think that would make him happy.

Also, how about this weather? What the hell’s that all about?