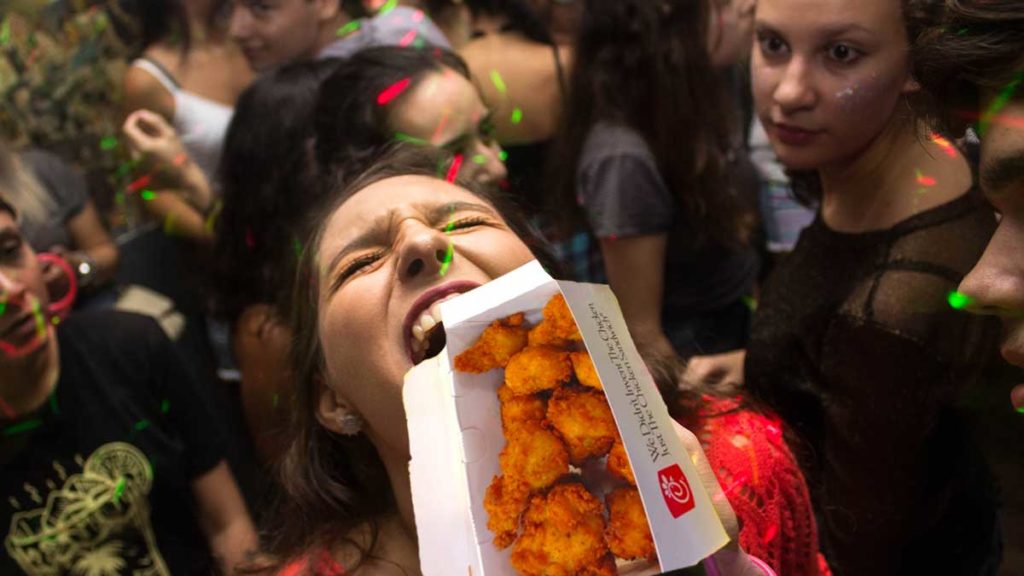 As part of a new promotion with Chick-Fil-A, the drunkest person arrested at Gasparilla will be handsomly rewarded with unlimited chicken nuggets for the rest of their life.

“I’m getting ready now,” said Rirlarn Uwachys. “I’ve been drinking non-stop for the past two days.” Uwachys said before vomiting all over my shoes. “I’m so sorry,” he said before cracking open another can of beer and chugging it.

“We want to make sure some people drink so much that they die,” said Chick-Fil-A spokesperson Delvin Chikenmaster, “Obviously who ever drinks the most won’t be able to enjoy their free delicious chicken sandwiches for life, because their life will end by the time they win the award.”

Chikenmaster then laughed for thirty minutes straight in a very evil manner.

“I’m still going to give it a chance,” said Uwachys after vomiting all over my shoes again.

“Dude please eat something if you’re going to drink this much,” I said to him, getting a little angry at his behavior.

“Oh I will eat something alright, when I win those free nuggets for life,” Uwachys said before passing out in front of me, cracking open his head on the cement sidewalk in front of the liquor store I was interviewing him at.

“Oh shit, this isn’t good,” I said out loud to myself, freaking out that people might think that I just killed a man.

“Hey did you just push that guy into the cement, causing him to bust his head open and bleed to death?” Said a man walking out of the liquor store.

“What? No! He fell because he was drunk,” I said while being real scared. “Please help me call an ambulance we need to get this man to the hospital.”

As we attempted to help him, Uwachys stood up and pretended like he was alright. “It’s okay folks, I just need another beer and it will clear this thing right up.”

“No man you need emergency care like right now,” I said to him.

“I’ll be alright, nothing has ever stopped me from getting free Chick-Fil-A, I’ve been first in line to so many store openings now that…” Uwachys then threw up all over my shoes again. “Oh gosh, I can’t stop!”

I then dropped him because I was grossed out and he hit his head again, but I didn’t help him up that time and I just left him there with the stranger exiting the liquor store. For all I know he is fine and you can expect to see him at the upcoming Gasparilla Parade.