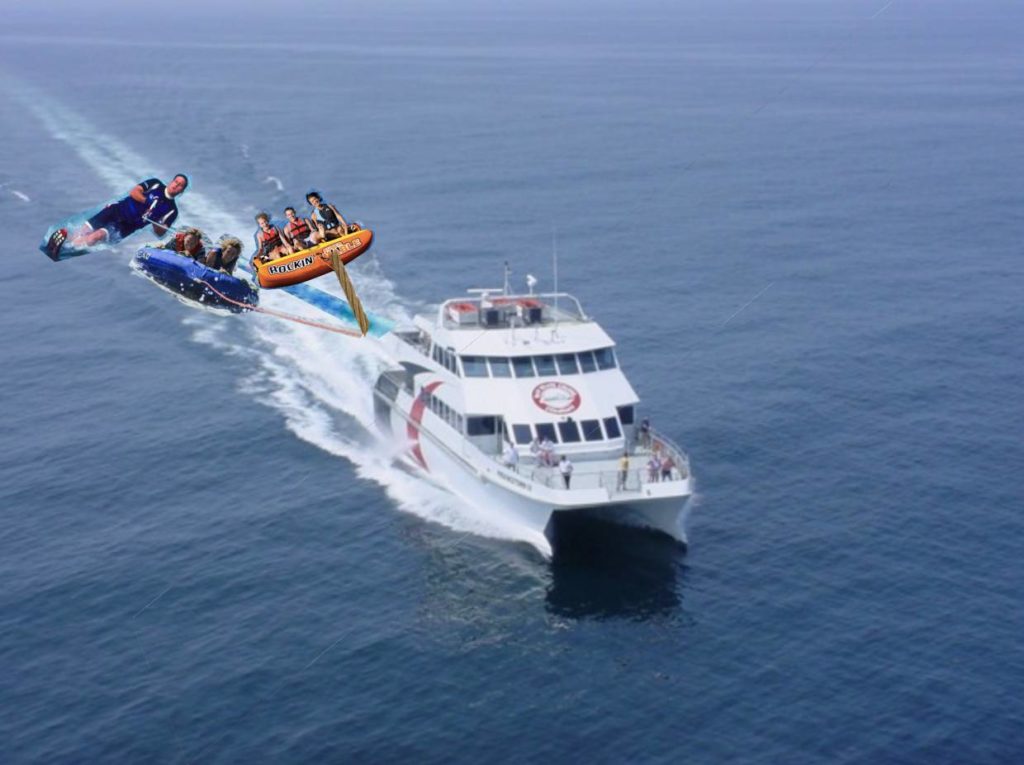 The popular “Instagram-worthy” Cross Bay Ferry announced today due to the overwhelming volume of patrons, new tubing and waterski options will be added.

While it only cost $8 to board the 40-minute voyage that zips passengers across the bay, Cross Bay Ferry representative Devon McCrimmers assured me that for $5 he will tie up a rope with enough slack to the back of that thing.

“Yeah man, you just hold on real good and I’ll make sure the captain don’t suspect nothing.” McCrimmers spits out some chewing tobacco as he looks around suspiciously. “Now you make sure you don’t let go because we won’t be able to go back around to get you.”

I met with McCrimmers in a bushy fenced area of the Channelside marina 30 minutes before departure time. There was an obviously foreign family and a young couple waiting as well.

He led us to a hole in the fence that seemed to be crudely ripped open with bolt cutters, my shirt ripped as I climbed through.

After handing McCrimmers $5, he helped us down the side of a port dock. I jumped  on a tube and watched as he snuck through the dock and tied it up to the back of the ferry. He gave us a thumbs up to signal we were set.

I shared my tube with one of the foreign kids, the rest of the family was on the opposite tube, the young couple I assumed had done the water ski thing before because it looked like they were ready for take off.

“Sure beats driving on I-275,” said the young man, prompting generic laughter from his girlfriend.

Twenty minutes later the ferry started up and I immediately kicked the kid off my tube and play it off as him not being able to hold on. Not sure how the family felt about it because they let go about halfway through.

The young couple surprisingly made it across the bay quite majestically with some sick wave riding and synchronized maneuvers.

I somehow managed to hold on for the majority of the ride until my tube caught a big wave and flipped over, dragging me for a few minutes until I ultimately had to let go because I lost consciousness.

Upon waking up on the St. Petersburg side of the bay I was able to enjoy some great dining and shopping options and make it back in time to catch the ferry back.

Highly recommend for those seeking alternative routes of transportation across the bay.