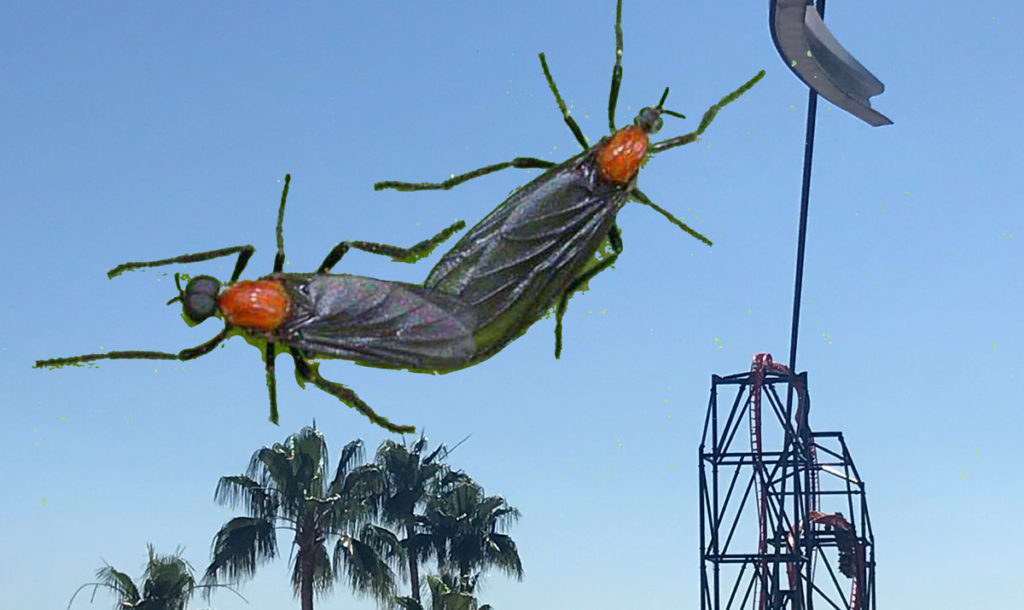 Hundreds have lined up to receive full cash refunds from Busch Gardens after what’s being called a “love bug fiasco.” Thousands of love bugs descended on the amusement park Wednesday, causing meltdowns from numerous guests evolving into full on breakdowns for dozens of families.

“It was awful,” said Clint Morgan, father of 3, who was visiting the park from Milwaukee. “My kids were trying to eat ice cream, and the love bugs just covered the whole thing like sprinkles, and my kids thought it was chocolate at first, then when they realized it was a bunch of bugs having sex connected at the abdomen, they all began screaming and throwing s**t.”

Clint wiped the sweat from his brow before putting back on his Tampa Lightning tye-dye visor. “We were on Tigris, that new rollercoaster, and them bugs were getting into our mouthes and we were choking on ‘em as we flew through the air at hundreds of miles an hour.”

Mike Lee is a summer intern working the take-off button for several roller coasters, he stopped to talk with us. “I was pushing the button, sending off coasters full of people, then when it would get back, they’d be all covered in bug guts, because they were hitting them at such a high speed.” He kicked a hacky sack. “I feel bad for the people. They were really upset.”

Along with getting in peoples food and disrupting rides, the bugs also affected many of the live theater shows, such as the Wild West shootout.

Bugs were getting in their sight of vision and throwing off cues for actors to jump off a building onto a safety mat.

“Sometimes they don’t put the safety mats out in time!” Said head choreographer for Wild West shootout, Blinkon Logg. “Yea, we teach all the dancing with the boots on, so all the actors feel like it’s a real show, but also they don’t get the mats out in time. I’m sorry the first thing didn’t really have anything to do with the second thing I don’t know why I said it like that.” Then Blinkon did a kick flip and was airlifted out the Gardens of Busch.

The zoo animals loved the love bugs, with the monkeys reportedly feasting on them, filling their little ape stomachs with insect protein. “Yum yum,” said Miko the monkey. “I love eating love bugs!”