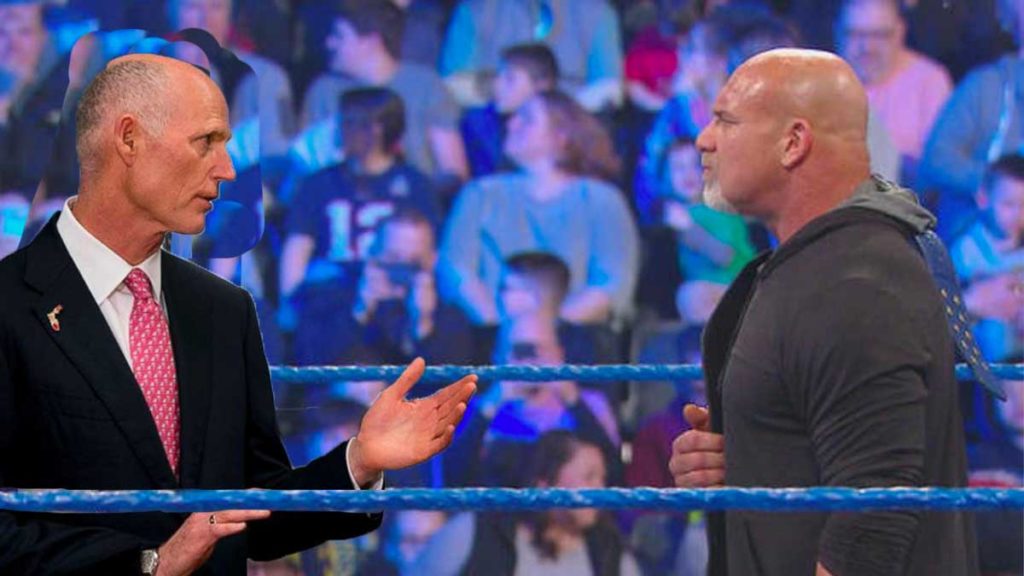 During a surprise appearance at Friday Night Smackdown on Fox, Florida Senator Rick Scott interrupted promo by current Universal Champion Goldberg in an attempt to challenge him on the grandest stage of them all.

“I didn’t ask ‘Who’s Next?’ yet,” Goldberg said, visibly upset that no one told him about the surprise appearance.  “But if you want this thing around my waist, you’re going have to step into the ring and take it from me.”

Scott then rushed the ring, only for Goldberg to immediately deliver a Spear.  Goldberg then began celebrating, sticking his tongue out and reveling in the excitement of the crowd.

While Goldberg was distracted, Senator Scott performed a kip-up and began to stalk the Universal Champion.  When Goldberg turned around, Scott charged at him and performed his finishing maneuver which consisted of dislocating the bones in his arm and using them to brace Goldberg, taking him down to the ground where Scott was then able to unhinge his jaw and swallow Goldberg whole.

The segment lasted about 40 minutes as Senator Scott worked his way through eating and then digesting Goldberg in the middle of the ring.  It was quite boring and much of the crowd left because it really sucked.

“This is why I stopped watching wrestling,” said Pernnius Blirts.  “I still attend the shows, spend money on the merch, consume over a dozen hours of wrestling and spend much of my free time complaining about what I’m seeing online…”

I began to try to exit this conversation but Blirts continued talking, “The wrestling is just not as good as when I was a kid and I don’t know why they keep trying to make these old dudes relevant.  How about pushing some of the younger guys? You know what I’m saying?”

I did not know what he was saying.

“With that being said, did you know Rick Scott won the election for Florida governor twice with less than 50% of the votes?” Blirts was now trying to get political with me and I was really turned off. “He also has spent over $60 million of his own money in every election he’s been in, and won!”

I was now actively running away from Blirts, but I could still hear him talking to himself,  “Like we get it dude you’re rich and you’re good at convincing people to vote against their own interest. He’s not spending that much money without having a plan to make more.”