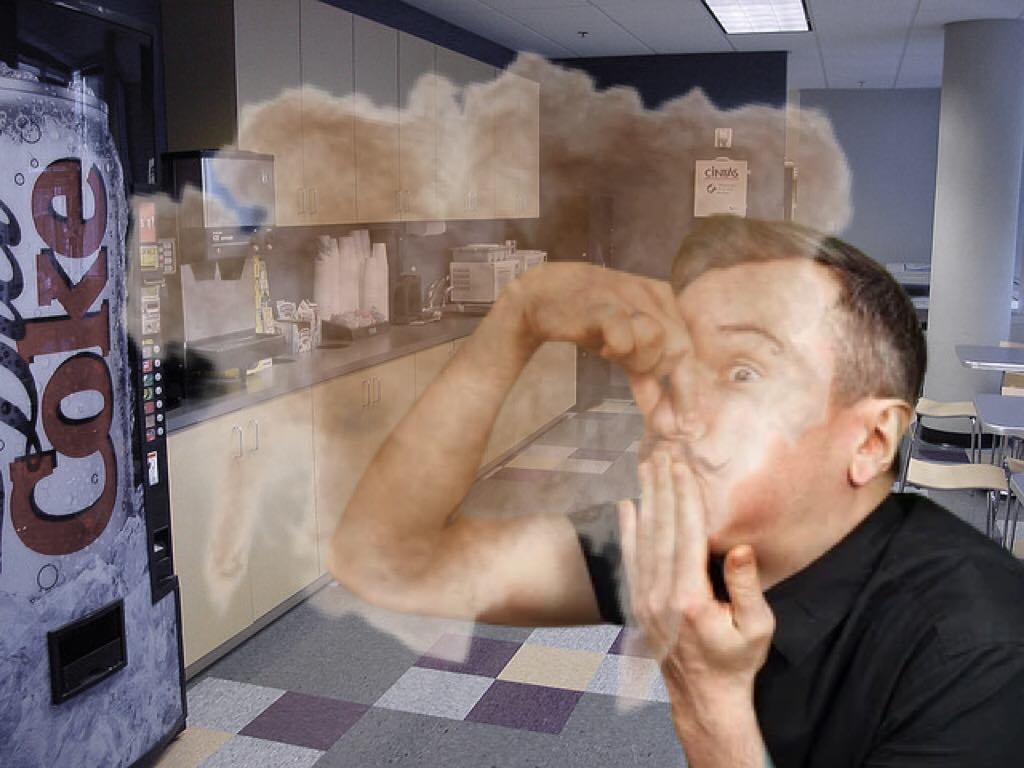 Tampa Bay, FL—Around 12:30pm EST, Kyle Majorie walked into the break room to microwave fish.
“I want it to smell up the place. Let’s people know who’s boss. I am boss.”

Mr. Majorie is not the boss. The boss, Mr. John Kelly, was out for the day on very serious business (Déjà vu Showgirls could not be reached for comment). This left Mr. Majorie, assistant manager, in charge of the office for the day. Unsure of how to establish his authority—and, according to Brittney from HR, generally unable to establish dick—Majorie decided on microwaving fish to both dominate a communal space and alert female coworkers to his presence.

But upon opening the door to the break room, Mr. Majorie walked into a fart of great integrity.

“Someone had beat me to it. Someone who wants to undermine me, the boss. It had to be someone bold enough to stand up to me, someone crazy enough to risk it for the biscuit. To butt sneeze the breeze. To crap their pants by happenstance.”

“Had to of been Eric Garcetti,” Majorie speculates, “The temp has had it out for me ever since I got wasted the one time and asked for his mom’s number. How was I supposed to know she died in childbirth?”

“I also fart in the break room every day,” says Garcetti, “I do it at 12:25pm, after Brittney. We like to leave the place nice and toasty for Kyle, who always eats at 12:30pm. But why does he care so much all of a sudden?”

“This would be what internet culture calls a ‘beta move’. Majorie, the ‘beta’, or ‘cuck’ in this situation, is usually subjugated by the authority of the Alpha, Mr. Kelley. Upon Mr. Kelley’s exit from the office, however, Majorie must perform his inherited role as the Alpha. This means he no longer puts up with farts that are not his. Unfortunately for Mr. Majorie, Brittney and Eric are what we in the profession like to call ‘Alpha-Sigma-BasedChads’, and they do not care if Majorie is the boss or not, knowing him to be a true ‘Betacuck-Perrywinkle.’”

This is an ongoing story, and TNF will update the article intermittently.

← Bill backed by DeSantis would make it illegal to cause discomfort for white peopleDeSantis clarifies stance on S.B. 148 →