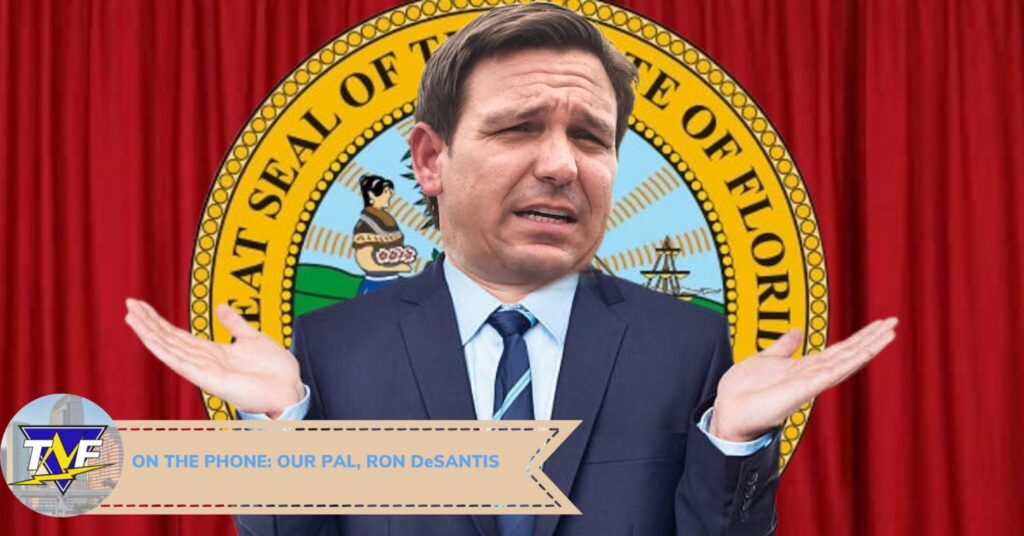 Yesterday, we reported on Florida Governor Ron DeSantis’ support of S.B. 148, a bill designed to protect white people’s delicate sensibilities from the threat of Critical Race Theory and the ensuing critical thinking that might result. Today, we’re pretending that he called our office to clarify some of what we reported he said, and we’re also pretending that we have an office.

“First of all, I appreciate you and your coverage of this important message. I deeply respect the media and the hard-working journalists who work in that field, none more so than yourselves. You guys are tops in my book. I wish you’d go back to more immersive and in-depth coverage of Tom Brady, though. Ha ha ha!”

“But regarding S.B. 148, it’s being interpreted as racist in nature and that simply isn’t the case. I can see why some people might think that, since the bill serves no purpose other than to cater exclusively to white people at the expense of others. But gosh, that doesn’t make it racist.”

“For instance, we’re not saying that black people can’t still do stuff. Now that would be racist! Nobody minds if black people continue to play sports and make jazz music and funny movies. We still want them as our sassy friends. They can work in the food service, sanitation and housekeeping industries, all at the same time if necessary. All that is still fine! Don’t worry black people, this isn’t really about you. It’s about us!”

“Sure, maybe you’re someone whose ancestors were direct victims of racism and maybe my ancestors profited from that and as a result I might still have some advantages that aren’t available to you and you may still face obstacles that I’ll never have to worry about. It’s not that we’re unwilling to acknowledge these things as facts, it’s that we don’t even want to have to think about acknowledging them as even a remote possibility. See? Different!”

“What we’re trying to get away from is not so much our responsibility for over 400 years of systemic oppression, which has benefited white people tremendously; we’re trying to run away from our awareness of that responsibility. See? That’s what really frightens us and makes us uncomfortable. Because if we’re aware of it, well, then we’re liable to feel obligated to do something about it, and… oh God, that can’t ever happen! There’$ ju$t TOO MUCH at $take!“

“I have to go. I’m feeling very uncomfortable right now. In a couple of weeks, it’s going to be illegal for you to make me feel this way.”

“Also, what I said earlier about respecting you and the rest of the media? I was being sarcastic. I hate you. And your Tom Brady coverage sucked!”

“Keep up the Rick Scott stuff, though. Now that’s funny.”

← Someone farted in the break room—Was It Eric Garcetti?Tampa Police Announce Gasparilla 2022 Will be 100% Crime Free →