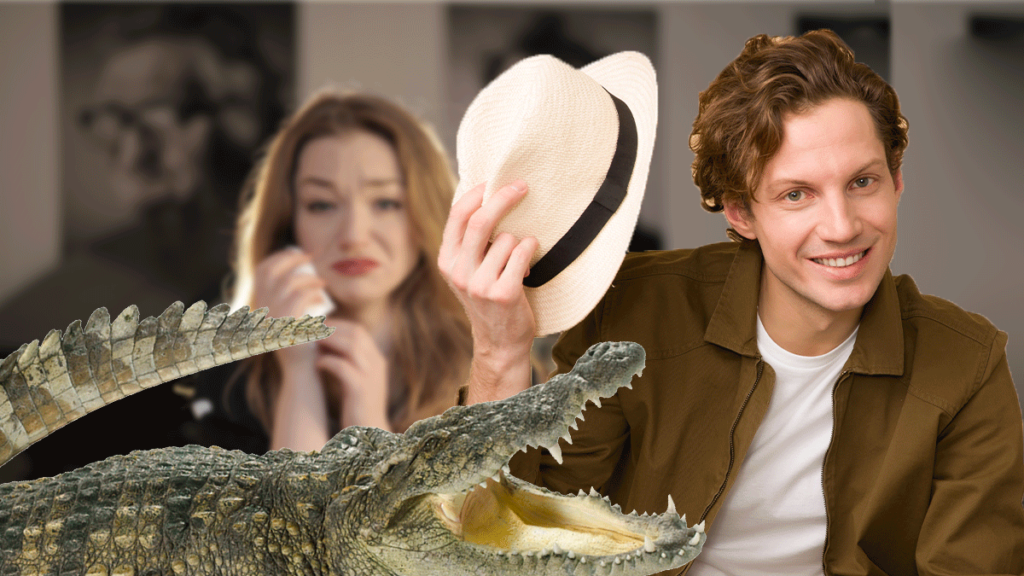 Two months ago, Paul’s Husband appeared to simply be a typical American man. He had a wife, three kids, a stable 9-5 job as an insurance agent, and a house with a beautiful dock on the banks of Lake Magdalene. Only Paul knew of the horrific conflict that was taking place within him. Only he knew the truth. Paul was not an insurance agent, nor a father, nor a husband. He was an alligator.

In May of 1999, Paul graduated from The University of Florida. On the night of his graduation, he and his closest friends, whom he referred to as “The Boyz,” gathered in his modest Gainesville apartment for a post-graduation party. Several times throughout the evening, they all raised their cans of Natural Light and recited their alma-mater’s fight song in unison. “It’s great to be a Florida Gator!” they would cheer. “Yeah,” Paul thought to himself. “It was.”

Twenty years later, in the Fall of 2019, Paul returned to Gainesville for the first time since that evening; this time as a father. His eldest son, Spurrier, was an incoming Freshman at UF and Paul was helping him move into his dorm room. When they arrived on campus, Paul felt something inside of him that he had not felt in ages. It was as if there was a creature moving around inside his stomach. He tried to ignore the feeling. He helped Spurrier unload the car and began to follow him inside. As they entered the residence hall a blonde eighteen-year-old girl exited, accidentally brushing up against Paul’s protruding beer belly as they crossed paths. Paul’s stomach let out a loud rumble. Paul stopped dead in his tracks. A strange look came across his face as he whispered softly “…the Gator Growl.”

On the trip back to Tampa from Gainesville Paul stopped at a popular truck-stop strip club known as Café Risqué. Paul entered the club, took a seat at the bar, and waved down the bartender. “I’ll have a Natty Light,” he sighed.

The bartender angrily retorted “Dude, we’re a bar. We don’t have Natty here. We’ve got Bud Light, Miller Light, and Coors Light. If you want a Natty, go ask a homeless person.”

This was unintentionally ironic, as many of the employees and patrons of Café Risqué were, in fact, homeless. Alas, the irony was lost on Paul. He began openly weeping in the middle of the strip club. He felt a tap on his shoulder, followed by a strange voice. “Are you alright?”

Paul looked up at the most beautiful woman he had ever seen. She had an exceedingly long, extended nose that protruded far away from her face, almost like a snout. It was round. Not pointy, like a crocodile, but round… “LIKE AN ALLIGATOR!” Paul exclaimed.

The stripper, clearly taken aback by Paul’s sudden movement, latched onto him with her weird gator face and began thrashing wildly. “She’s got him in the death roll!” a drunken truck-driver yelled from across the room. He was right. On cue, the stripper took Paul to the ground and began to roll rapidly, trying to drown him in the tepid mixture of bodily and alcoholic fluids that coated the strip club floor. This was it. Paul knew he was going to die. As he laid there, waiting to be dealt the death blow, he saw a light. As he reached out towards it, the face of an angel appeared. Paul couldn’t believe his eyes. He was face to face with the greatest Gator of all time.

“Paul, are you really gonna just sit there and get murdered like a little bitch? You’re a Gator, Paul. We don’t get murdered. We murder people.” Aaron Hernandez barked.

That was all he needed to hear. As the stripper reared her reptilian schnoz backwards, ready to strike him down, Paul let out a guttural noise so loud that the entire strip club shook. “The Gator Growl!” screamed the same trucker who had yelled out earlier. The stripper, taken aback by the sudden turn of events, froze for a moment. This was all the time he needed, as Paul sunk back into a puddle of stale beer mixed with uterine lining and disappeared into the abyss.

When Paul returned home, his wife Linda barely recognized him. Her husband, who had always worn designer suits, was wearing nothing but an Aaron Hernandez jersey and a taxidermy gator head over his dick. He had stolen these items, along with some PCP, from various cars in the Café Risqué parking lot. His eyes, which were normally bright blue, were now black as night. He walked right past her, through the house and onto the dock. Linda ran after him.

Paul turned around, let out one final Gator Growl, and then leapt off the dock into the lake. He hasn’t returned since.

Paul now resides inside of Lake Magdalene with a group of gators that he refers to as the “OGs (Original Gators).” The family that he left behind sometimes gathers on the dock, gazing out over the lake, hoping to catch a glimpse of the former patriarch of their now broken home.

When they do, in fact, see that blue and orange Aaron Hernandez jersey breach the surface their hearts skip a beat, momentarily convinced that their long-lost loved one is at last returning to where he belongs. Then, Paul submerges himself once-more into the depths of Lake Magdalene’s murky waters. Linda sheds a tear, knowing that as much as she wants him to come home, Paul is in fact where he belongs – with his fellow alligators.

UPDATE: As of this article’s posting, Paul got eaten.

← Governor DeSantis creates an OnlyFansWest Tampa man has greater appreciation of freedom, due to COVID-19 →