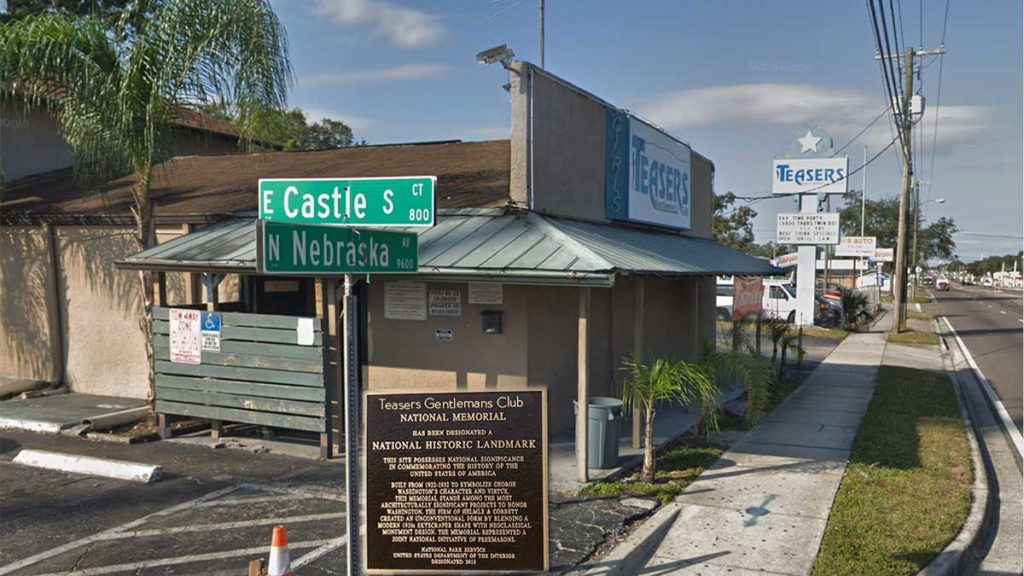 Nebraska avenue strip club, Teasers, has earned the status of national historic landmark this week, making its structure safe from demolition, with a guarantee from the city to keep its architecture intact for at least another 200 years.

Teasers, the unassuming local strip club which has held its location peacefully for many years, actually dates back to the early 1700’s. Before America’s foundation, Teasers was actually a Native American structure, that chieftains and warlords would do ceremonial dances inside around a brass poll. The dancing was thought to ward off evil spirits and enemies from harming the local Tanpanian tribe. NOT “Tampanian,” history shows that the natives living amongst the land we now know as “Tampa,” was originally called “Tanpa,” with an “N,” but European communication made it sound like “Tampa” when saying “Tanpa,” because the N was hard to distinguish, so settlers just stuck with Tampa. (This is actually a real piece of history you can look up, not just part of this fake news article.)

As the years went on, and the Europeans massacred all living locals, they kept up the original Teasers structure, and even kept the name “Teasers,” which in Native language meant, “proud warrior dance,” which just happened to line up perfectly as a potential gentlemen’s club name. Barely anything has been changed on the inside from Native times, aside from a killer sound system, and neon lights, but it’s rumored that sometimes during lap dances, you can still feel the native spirits inhibiting your body, getting their enjoyment out of the beautiful stimulation from the young queens working inside the renovated pleasure palace.

The style of dance may have changed, but the spirit of the native’s still flourishes through the building, giving guests a view into yesteryear, and a time where people not so different from ourselves used to indulge in the act of spiritual expressionism. A plaque will be placed on the side of the building, decreeing the historic landmark status of this fascinating structure.

As part of a new tourism marketing campaign, Tampa plans to prominently feature teasers on the front of pamphlets and posters, which are set to be posted around the world. Now you could be walking down an alley in Beijing and find yourself face to face with a poster advertising Teasers historic landmark in Tampa. In honor of the new title of historic landmark, for one hour only, Teasers will be running a special promotion of free cocktails. When this hour is, has not been determined. Like and subscribe to Teasers fan page on FaceBook for future updates.