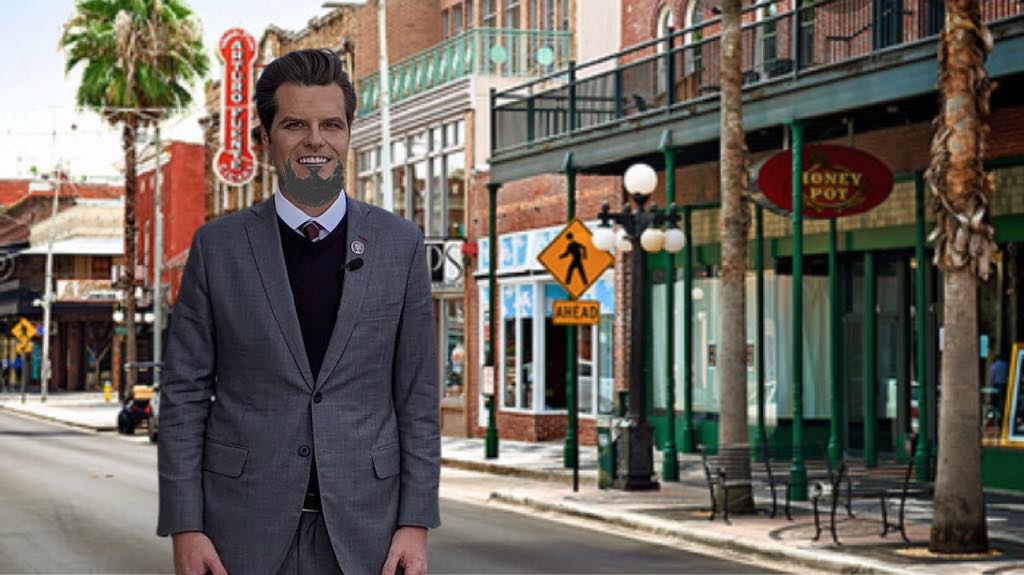 A pastor for a new youth ministry cult east of Tampa has been spotted walking around Ybor City, and many people have mistakenly assumed he is Matt Gaetz, the U.S. representative for Florida’s 1st congressional district.

“Matt Gaetz? Ha ha, no that’s not me. I’m Pastor Keith and I just want to hip the kids to Jesus and the internet”, he said.

“Man, I don’t believe that for a minute,” said club kid Teddy Mintwater. “I know that I’ve seen him before he showed up in Ybor. I’m pretty sure my dad voted for him.”

Pastor Keith operates his ministry, “The New Millennium Tabernacle for the Wayward Seekers of the Fiery Flame” out of a storage unit at the UStashIt facility on East 7th Avenue where it turns into Broadway, out past where Ybor stops being Ybor but isn’t quite Brandon yet.

“I’ve seen him walking around but I didn’t really pay attention to him at first”, said drag queen Gnarla Hoobastank. “This is Ybor City. We don’t really pay a lot of attention to weirdos here. Yet somehow this guy stood out. He just looks like the kind of idiot who would wear a gas mask to mock COVID-19 while his constituents die from it and Tweet pictures of himself doing it.”

Another Ybor denizen, go-go dancer Parla Zeetz, isn’t sure who he really is. “He came up to me and started talking to me and I just walked away. I assumed he was trying to get some votes or some filibusters or something. I don’t really follow politics,” she said. “But he could have been talking about God, I guess. Either way, my level of interest in what he has to say is the same: non-existent, just like God and the government.”

A man who identified himself simply as “Hookah Joe” said he’s positive it’s Gaetz. “I don’t know what he’s doing in Ybor but that’s him, no question. He’s got the elongated head, that facial expression that looks like someone learned how to smile from reading about it in a book and clothes that were obviously designed for big-and-tall juveniles to wear to their arraignment for murdering their parents. Man, that’s definitely Matt Gaetz all day”, he said.

Pastor Keith said he wants people to leave him alone and let him preach his message in peace. “I’m just trying to spread the Word of God so I can save some homos,” he said. “I really wish everyone would believe me when I tell them I’m not Matt Gaetz and stop throwing milkshakes at me.” He thought for a second and added, “Maybe it would help if I stopped calling people ‘homos.””