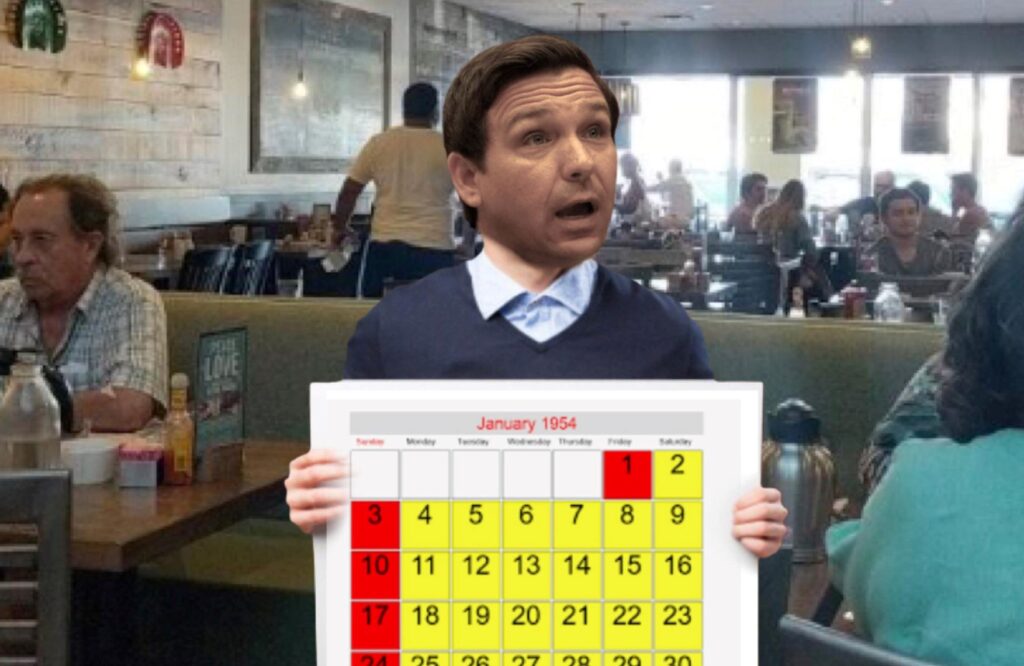 Florida Governor Ron DeSantis has declared that every problem that people dealt with in 2020 is a thing of the past and no longer a factor on any level.

“2020 is over. That’s an indisputable fact”, he said over a mimosa at a media breakfast at the First Watch on Henderson Boulevard in South Tampa this morning. “Don’t take my word for it; look at this calendar!”

“There have been no dramatic spikes in the COVID number so that’s behind us”, he said. “Nobody needs to wear masks anymore. And you can go anywhere you want and spend all the money you have!”

“Are kids still in cages? Were they ever? Probably not!”, he continued. “But there have been literally zero fake news reports about that so far this year!”

“All lives matter more than ever! Not one celebrity has died yet. No wildfires! No domestic terrorism incidents! Not one school shooting! Nothing bad has happened this year. That means there is absolutely no evidence to indicate that anything bad will happen this year! We did it, everyone! We’ve turned the page!”, he said, stuffing a seemingly endless stream of First Watch’s signature menu item, ‘Million Dollar Bacon‘ into his mouth. “On top of everything else that’s already awesome, President Trump is still the President of the United States!”

“I’ve ingested nothing but hardwood smoked bacon baked with brown sugar, black pepper, cayenne and a maple syrup drizzle and mimosas since the clock struck 12 last night and I haven’t gained a single pound. You tell me how life can possibly be any better than that”, he said as he crawled under his table, curled up and fell asleep.