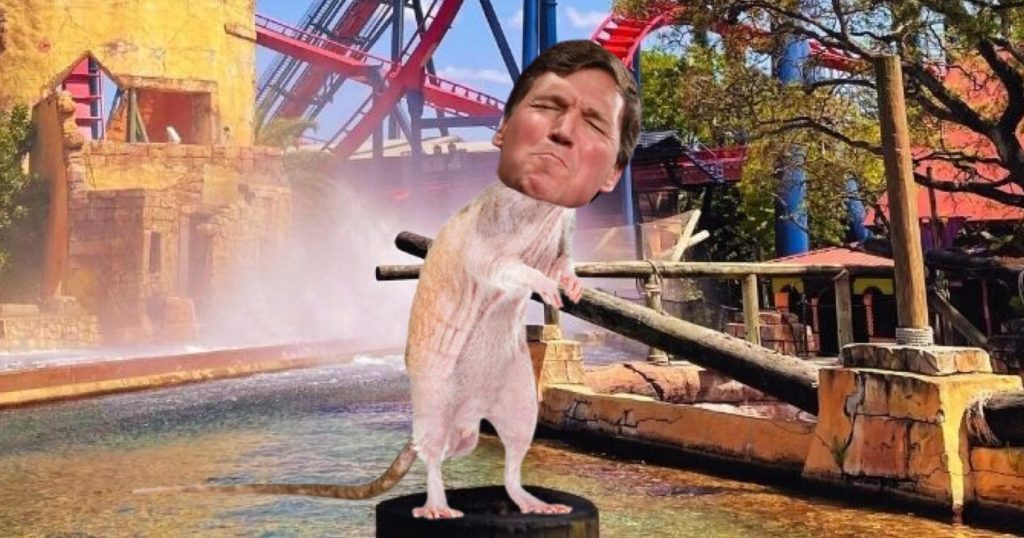 Officials at Busch Gardens in Tampa have announced that a giant rat that looks like Fox News pundit Tucker Carlson was born recently at the theme park/zoological attraction’s nursery.

“We noticed there was something seriously wrong with the hideous mutation almost immediately, but it was made apparent when the creature’s own mother rejected it,” said Busch Gardens Giant Rat Baby Scientist Harry Galerk. “There was no doubt when the abomination refused food and water, demanding misogyny and racism instead.”

“We waited a few days to see if it would outgrow the unfortunate affliction but it didn’t. In fact the resemblance to Carlson actually became more defined with passing time,” he said. “We made plans to euthanize it but then someone pointed out that it wasn’t actually Tucker Carlson, just a giant rat that looks like him and therefore, may not deserve to be put to death simply for existing.”

When asked how such a freakish birth tragedy could happen, he said, “Well, for obvious reasons we’re not going to say Tucker Carlson snuck in here and had sex with a rat. Although, that is the only logical explanation, so probably.”

“I mean, is anyone shocked that Tucker Carlson bangs rats? He was sexually aroused by a cartoon of an M&M for crying out loud,” he said. ”Although I guess it’s kind of a surprise to find out that he isn’t involuntarily asexual.”

Plans to put the giant Tucker Carlson-faced rodent on display were thwarted when it was stomped to death by a yak who took offense to its existence.