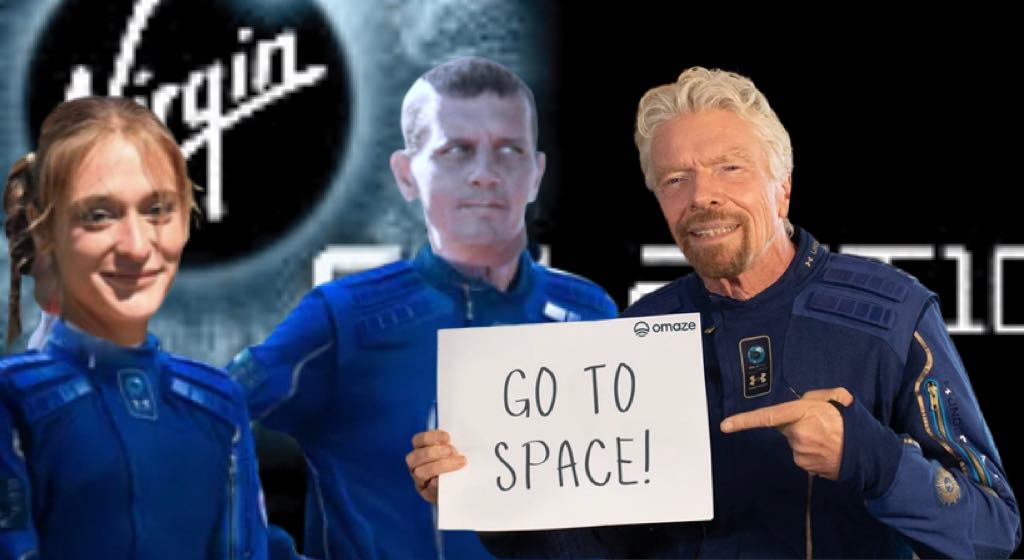 Joe-Jack and Glucinda Porkrind of Seffner have won free tickets to travel to space via Virgin Galactic. “We prefer Plant City Heights, if you don’t mind”, said Joe-Jack. “Seffner ain’t too classy.”

“We gone be asternots!”, said Glucinda. “We want to thank Mr. Bransing for this opportunity.” “Yeah, we’re big ass fans of his town in Missouri”, added Joe-Jack. “It’s like Atlantic City but not all posh and uppity.”

The Porkrinds entered a contest presented by Omaze, the fundraising platform which offers prizes, such as material goods, property, or celebrity experiences. The grand prize offered was listed as such:

Space has given us all the chance to dream: Of beauty and wonder. Of great adventures. Of being part of something bigger than ourselves. And now…

You’ll be one of the first people to live that dream on a Virgin Galactic spaceflight!

Let that soak in for a minute. You’re. Going. To. Space.

You and your guest will board a Virgin Galactic spaceship where you’ll take off smoothly, just like an airplane, and watch as the colors outside your window change from blue to indigo to midnight black…

Hovering above Earth, nothing can prepare you for the breathtaking views of our bright planet and surrounding galaxy. Or hearing “you are now free to float about the cabin.”

Cameras throughout the cabin will record every moment in HD. With 17 circular windows for viewing, every seat is a window seat. And there’s even a mirror to watch yourself floating through space.

No donation or payment is necessary to enter or win this sweepstakes.

“The chance to stay at a hotel in New Mexico is what really sold us on entering the sweepstakes”, said Joe-Jack. “That, and the ‘no donation or payment’ part, ‘cause we didn’t pay for shit, including the internet we used to sign up. That’s what my neighbors get for making their Wi-Fi password ‘FUCKUJOEJACK69’. Dumbasses.”

“New Mexico is like Mexico but better because they ain’t as many Mexicans”, added Glucinda. “Dang baby! We goin’ to space!!”, as she wrapped her legs around Joe-Jack and started aggressively tongue-kissing his ear.

“Everybody wants to criticize millionaires for turning space exploration into their own little, private recreation activity”, said Joe-Jack. “Well, we’re living proof that simply ain’t true, because we ain’t millionaires.” “Yeah, we didn’t donate a single penny to that stupid ass charity, whatever it is”, said Glucinda. “We’re just regular folks. Dang, baby! I can taste your brain!”

Reached for comment, Sir Richard Branson said, “This wasn’t supposed to happen. I realize that there is a certain amount of inherent peril when it comes to space travel but this wasn’t something I anticipated.”

“If we can’t keep poor people out of space, what’s the point of even going?”, he added.

“Yeah, well, I guess next time you’ll need to make that a rule, you broke-ass Kenny Rogers lookin’ bitch”, said Joe-Jack. “All due respect. See ya on the moon!”

← Quiz: What kind of musician should you be?Best of the Bay winner’s victory sullied by lack of Facebook Likes →