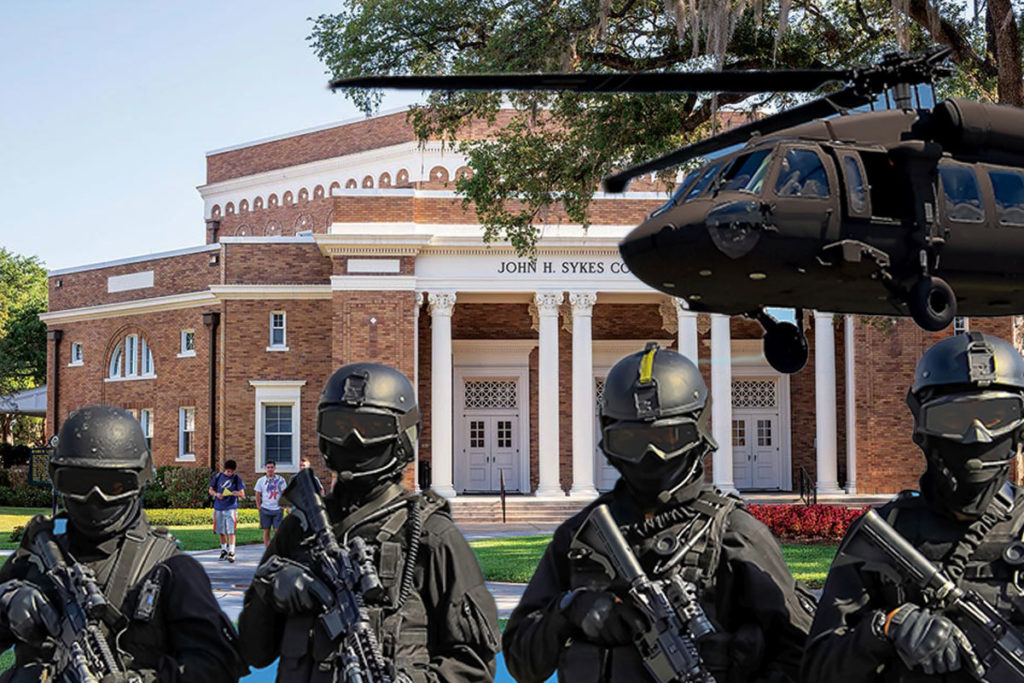 The entire University of Tampa was raided Wednesday morning when it was discovered that not only was underage drinking occurring in the dorms, but there was also drinking going on amongst the entire staff at the school at all times of the day. Teachers, Maintenance, Deans and every level of staff at UT had been drinking in every building on campus, during school hours.

Normally the police wouldn’t interfere in the petty drinking infractions taking place on campus, as the minor misdemeanor tickets and court fees help keep the system running smoothly, however the amount of children buying alcohol illegally from the neighboring gas stations was getting staggeringly high, forcing the Tampa Police Department to take critical actions, planning a large sting operation which included 33 undercover cops that had formed a frat on campus which had gotten too out of hand when numerous cops had gotten lost in the identity and refused to give up and chose to continue their cover, as some had fallen in love during romantic relationships started under false pretenses.

The undercover cops were able to infiltrate the security office relatively easy to access security cameras watching the entire campus, revealing that not only were students the cause of dumpsters piling high with empty aluminum cans, but teachers in offices and classrooms were openly drinking before and during classes, some passing around flasks to the students.

The cops revealed their cover and proceeded to arrest exactly 1,000 students and teachers, they would have arrested more but they ran out of handcuffs and zip ties. It was described as a “relatively easy process,” as most students were still asleep during their first classes, so it was easy to arrest the faculty without causing a scene.

“This is crazy!” Said one student who wasn’t arrested for some reason. “I’m so wasted right now, I can’t believe they didn’t get me!” He performed a backflip off a park bench and barely landed without hurting himself badly, then proceeded to scream “Spartans!” Then he high-fived a girl really hard and she laughed like it didn’t hurt.

“I can’t believe this is what we’ve come to,” said Ron Vaughn, President of the University. “You used to be one of our students here, writing for our newspaper. For money!” He slammed his fist on his desk. “It wasn’t much money, but we paid you! To write for us!” He started ripping papers up and throwing them in the air. “Ahhhh!” He yelled to the sky in frustration. “This isn’t fair!” He started whining like a baby. “I’m going to throw a fit!” He said as he threw office items at the walls, shattering pencil cups and paper clip holders. “Ahhhh!” He screamed even louder, shaking the windows and making my ears ring.

“Jeez!” I said. “Calm down! Yes, it’s true, I didn’t get my education here, so the irony of me being the one to break the scandalous story on the school that I graduated from could potentially discredit my ‘John Dipset Jacobs’ Bachelor of Arts degree, but this is just a risk I need to take for the sake of journalism… Also, I was fired from the Minaret, our school newspaper the second semester of my senior year, after I had written for the paper since freshman year…” I began to slyly slide my finger across Vaughn’s desk. “So this is a little personal to me.” I knocked down a large wooden/glass cabinet, spilling his personals to the floor, he was stunned. “I’m not playing your games anymore Ronny!” I sliced a hole in his wall with a scythe that grew from my hand, I’m now a metallic shape-shifter like the robot in Terminator 2. I grow 15 feet tall, smashing through the roof of Ron’s office, crumbling down debris to the ground.

He covered himself and crawled under his desk, my voice echoed loudly, demonically, in harmony with a loud siren blaring from miles away, seemingly mimicking my movement and behavior.

A twin giant demon was mirroring my movements miles away at the University of South Florida. I fell in love with the twin demon from USF. I’ve lost sight of my goal, just like the compromised undercover frat cops who chose to live their alternate identity instead of staying true to the reason they took the job in the first place.

I reflect on how if I join the twin demon in continued destruction of local university campuses, I might not finish the story I began writing about the University of Tampa getting raided, and I may spend more of my time with the demon than doing my work, but I come to the conclusion that it’s worth it, and maybe the story about UT getting raided didn’t need to get written at all.

Did you think about that? I bet you didn’t. But you know? It doesn’t matter. Because I hate to say this, but this is actually a fake story. I know. I’m just as surprised. It hurts me more to tell you that than it does you to accept it. Check out episode 35 of the Tampa News Force podcast, it’s a real banger.