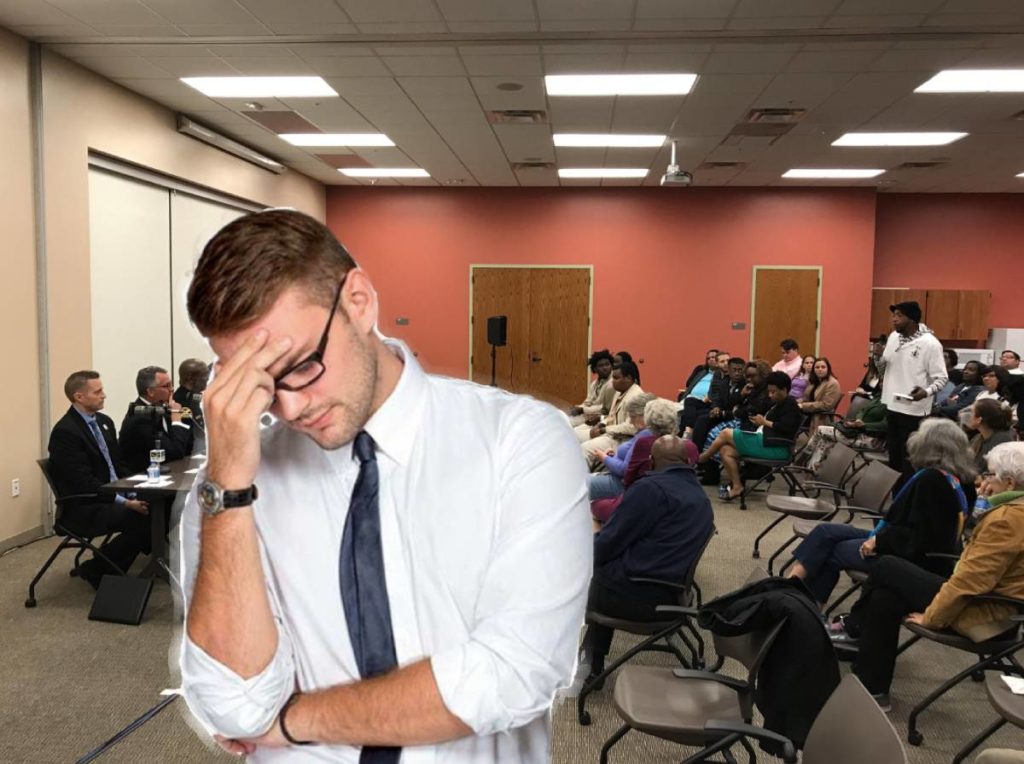 “That was embarrassing,” says aforementioned Council Commissioner Rick Stone. “It’s a long story, involving an inside-joke/prank between me and some local kids, but that’s not at all what I was hoping would happen, and boy do I have egg on my face.” He pauses, “…White on my face.” He face-palms.

Second-hand recollections of the incident include details claiming that he was trying to demonstrate some sort of “energy-saver program for the ‘future’ whatever that meant.” One thing led to another, and commissioner Rick was, “laying on his back climaxing into his own mouth at an angle that could only be described as disturbingly impressive.”

The hall quickly and quietly emptied as onlookers murmured on their way out about the shockingly grotesque nature of the event they had just witnessed. “I came to complain about the sandwiches my son was served at his soccer practice, and what I just saw will permanently scar my psyche. Is there someone I can sue for this?” She maniacally laughs in an unstable, stunned, panic.

“This is truly a disgrace to the sanctity of our local government rituals.” Says fellow council chairman, Brett Boatwagon. “I mean, keep that stuff at home,” She shoos away the idea as if it’s in the air in front of her. “Also, I know my name’s ‘Brett’ but I identify as a woman, so when you quote me in your newspaper- what is this?” He asks. “Tampa News Force.” I reply. “Right, whenever this is out, just make sure you use the pronoun ‘she’ when referring to me, because I identify as woman, even though physically as you may have noticed, I have not transitioned.” Brett flips his hair then he walks away as we wave him goodbye.

“Again, I’m sorry.” Says Rick Stone, disgraced city council commissioner. “It’s just the craziest story, I don’t know how to describe it or how they talked me into it, but somehow I was tricked into sexually relieving myself into my own mouth. I know it sounds crazy, it is, I totally agree, I just really hope the city can forgive me for my regrettable actions today. I didn’t graduate Harvard for this. I graduated Phoenix Online, and they promised me I could achieve whatever I put my mind to.” He pokes his skull. “I can get over this.”

Edit: Since this article was published, Rick Stone has officially been placed on indefinite paid-leave, and will not serve on the city council anymore.