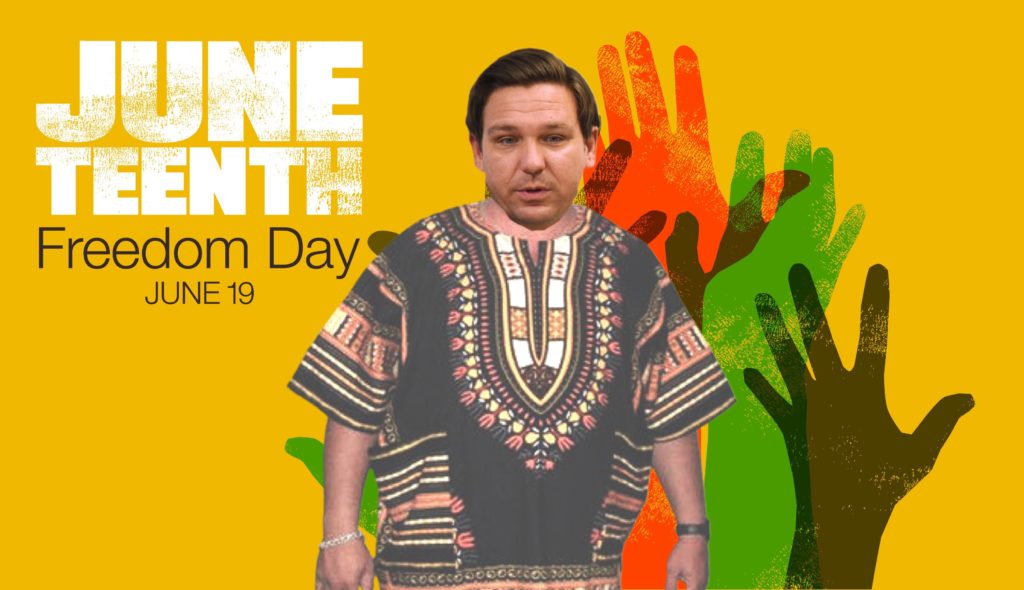 Florida Governor Ron DeSantis is experiencing anxiety in anticipation of the upcoming Juneteenth holiday, which takes place on June 19th and commemorates the anniversary date of the June 19, 1865, announcement of General Order No. 3 by Union Army general Gordon Granger, proclaiming freedom for enslaved people in Texas

“This one is tricky,” he said. “How do I sanction a holiday that I don’t want kids to learn why it exists? Do I have time to jam a law against it through the state legislature? Of course I do. That’s the least of my worries.”

“This is the kind of thing that causes white college students to start growing dreadlocks and nobody wants that.”

That’s not the only aspect to the observance, which is recognized as a federal holiday that celebrates the emancipation of enslaved African Americans and is also often observed for celebrating African-American culture, that bothers DeSantis.

“See, that last part seems racist to me. How are white people supposed to enjoy that? And if white people can’t enjoy it, how could it possibly qualify as a holiday?” he questioned. “Then again, it is on a Sunday this year, so maybe no harm, no foul there, so to speak. But what about all those blacks who normally work on Sundays who will want the day off? Who’s going to wash the dishes where I eat brunch?? Errg, this is really difficult!”

“At least the homos aren’t into it and there are no significant black Disney characters associated with it.”

“It’s one day. It’ll be all right,” he said, while sitting on the floor in the dark with his knees pulled up to his chest as he rocked back and forth.