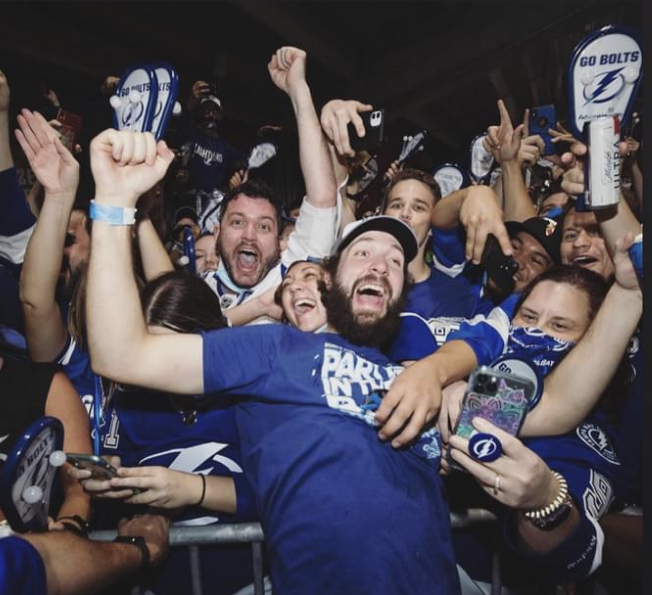 Tampa Bay Lightning all-star forward Nikita Kucherov, along with at least a dozen Lightning fans, is still celebrating the team’s winning the NHL championship on September 28th, popping up unexpectedly at events around Tampa Bay.

“We were attending my niece’s christening at Bell Shoals Baptist Church when this crowd of rowdy people barged in, yelling and laughing. They poured beer all over the baby! We were all horrified!”, says George Wreggles of Brandon. “Then I realized who it was and yelled, ‘hey it’s Nikita Kucherov!’ Sandra’s mother exclaimed, ‘He scored seven goals and 34 total points in the postseason this year! Awesome!’ Then we all started chanting ‘Let’s Go Lightning!’ Except for my niece. She just cried. We took pictures. She’ll appreciate it when she’s older.”

Kucherov, originally from Russia, has played for the Lightning since the 2013-14 season and has always been regarded as a somewhat serious and stoic personality. “Yeah, he’s not really known to cut loose”, says longtime teammate Alex Killorn. “In photos, he always looks like a waiter just served him something he didn’t order. But hey, he’s having fun now and not hurting anyone! He’s a great player and worked hard for this. He deserves to go a little nuts.”

Some people are still concerned, at least for members of the sudden assemblage of random fans comprising Kucherov’s entourage, if not for Kucherov himself.

Marley Stifferson’s husband David is among those missing and suspected to be with Kucherov. “He went to the boat parade and then to Raymond James Stadium for the Cup celebrations and I haven’t seen him since. Sometimes he FaceTimes me and I ask, ‘David, where are you? What’s happening?’ and he just yells, ‘KUUUUUUUUUCH!’ and logs off.”

Kucherov and his band of merry celebrants are believed to be traveling the area in a tour bus stolen from Tampa Charter Bus Company, although the company refuses to press charges. “Normally, that’s obviously something we wouldn’t condone on any level, but it’s Kuch!”, says owner Wilbur Bussy. “Go Bolts!”

“I can confirm they’re travelling by bus”, says Tampa Mayor Jane Castor. “They pulled up in front of my house and set up a bouncy house in my front yard. I went out to tell them to get off my property and Kucherov hugged me, said he loved me and so I ended up inviting the neighbors over instead. We grilled some burgers and tapped a keg.”

Where they got the bouncy house from is still under investigation, however several local party rental companies are taking credit for donating it.