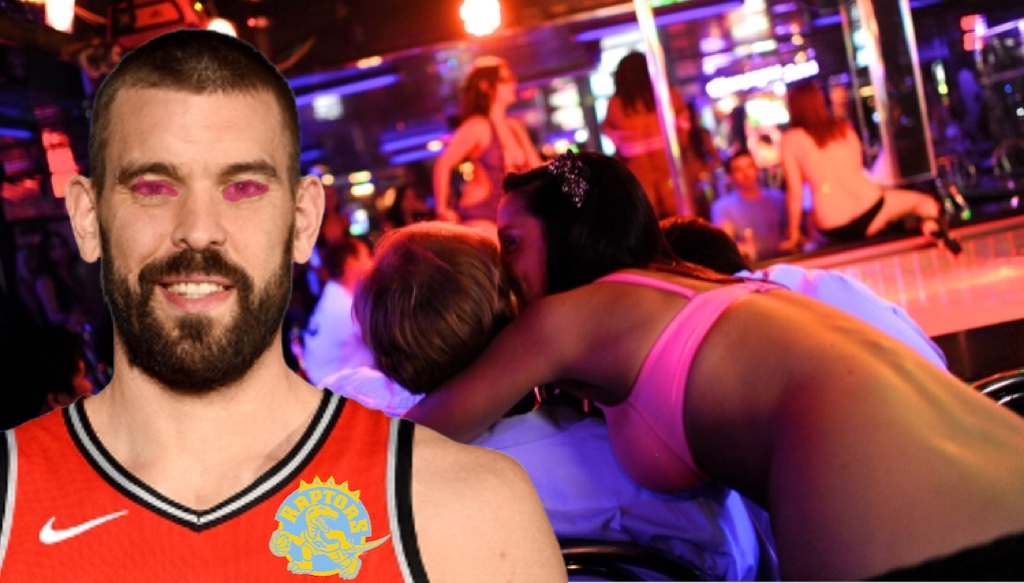 “I just wanted to indulge in Tampa’s culture seeing as I’m going to be living here for the next season.” Gasol said.  “Well, not seeing so well at the moment at least.” Gasol laughed.

Gasol was visiting Belly Dollz on West 40th street when he caught the retinal illness, however what’s strangest about this conundrum is that Gasol attended the strip club digitally as part of the Belly Dollz “Get dolled at home” e-program, giving attendees the opportunity to take-part from home, to stay Covid safe.

“Yea, I wasn’t even physically there” Gasol said.

“I was sitting in my penthouse, or should I say doll house,” Gasol laughed, “When the stripper said, ‘come here sugar, press your eye against the laptop camera, I want that raptor vision in my brown eye.’ So me being the gentlemen I am, I pressed my eye against my little laptop camera which sits atop the top of the screen, and low-and-behold, the next day I have a case of stinking pink eye!” Gasol laughed and yelled boisterously.

The pinkeye is not expected to effect Gasol’s season, and this story is only being published strictly for sensational appeal.

My boss told me this was not a valid “news story,” but I really pushed it and I said, “Yea, but did you know he also hooked up with a girl on Are You The One? And that show is about to re-premiere on Netflix on December 1st? Did you know that? It’s double relevant!” I yelled at my editor.

When he heard that he changed his tune a little bit and said, “Fine ok, as long as that’s for sure true and you’re not just making it up.” And I’m not. Marc Gasol hooked up with a girl on my season of Are You The One? They know who they are, and I think that’s great. And she even told me details about it! Ew! I don’t want to think about you blowing Marc Gasol! But it’s all good, good for her, I would be proud if I banged a famous athlete too. Are You The One? Out on Netflix, December 1st! Starring the author of this article! Can you believe it? I really can’t! But it’s true! Go watch that shit!