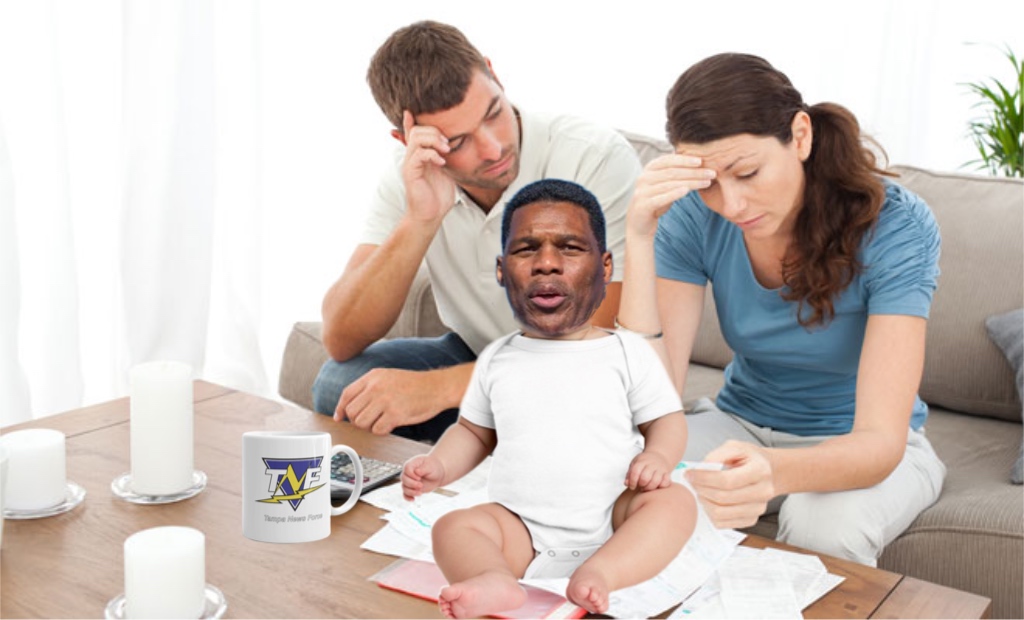 On the eve of the senate runoff election between Herschel Walker and Raphael Warnock in Georgia, Don and Sylvia Plehh of Largo have filed an emergency request with the Pinellas County court system to change their baby Herschel’s name immediately.

“When he was born 10 months ago, we thought ‘Herschel’ was a great name,” said Sylvia. “It’s old-timey and names like that are in style so we liked it.”

“Sure, we knew who Herschel Walker was,” said Don. “We never imagined he’d run for elected office, though. Not for something impactful like a state senator anyway. And we certainly never imagined he’d win and begin a long career as a politician and notable public figure. But he’s in a runoff; so you gotta figure there’s a 50/50 chance…”

“PLEASE SAVE MY BABY FROM BEING ASSOCIATED WITH AN IDIOT FOR HIS WHOLE LIFE!” interrupted Sylvia, pleading.

The Plehhs are worried that there’s already some irreparable damage from the association.

“He’s kinda stupid. He can’t even talk right. He just babbles incoherently. Remind you of anyone?” said Don. “I mean, it’s probably because he’s only 10-months-old but you never know.”

Sylvia has had her own trepidations since the baby was born.

“I was in Georgia last year. I don’t remember having sex with Herschel Walker and getting pregnant, but realistically, knowing what we know now, what are the odds? And look at our baby’s confused and quizzical face, like he doesn’t have a single thought in his head. It’s very similar to Walker’s in that regard,” she said. “I’m pretty sure it’s not his baby, though. Mostly because he didn’t pay me to abort it.”

“But can I be completely sure?” she added.

“I told you we don’t have to worry about that, babe,” Don said reassuringly. “Herschel Walker lives in Texas, not Georgia.”

Reached for comment at his home in Texas and not Georgia, Walker took a big bite out of a stalk of rhubarb and said, “Well, you know the old saying, ‘you can’t feed buttermilk to a badger and call it a hippomotatamuss’. I mean, you can… but then what do you feed a doctoroctomom to make sure it only has male spider babies?”

“Please, Pinellas County court system. Have mercy on our family,” said Don. “Just let us change the baby’s name to something else we find old-timey and stylish before tomorrow’s runoff election. We’re thinking ‘Adolph’ would be cute.”

← USF hires football coach you’ve never heard of yet somehow, exactly who you thoughtTampa Pastor Accused of Preaching in Drag for Sunday School →