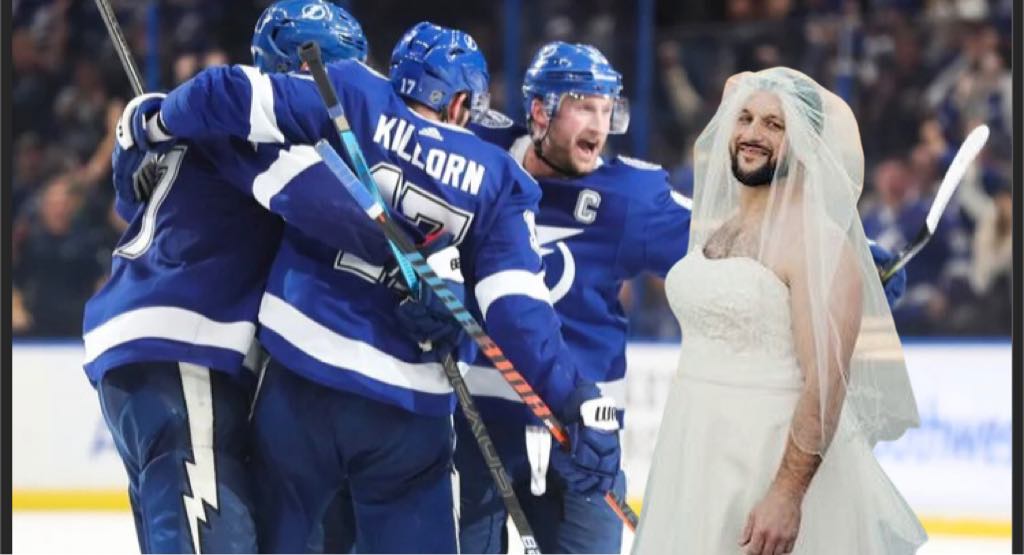 Burt Smitheren of Tampa is a diehard Tampa Bay Lightning fan and loves the defending Stanley Cup Champion team more than anything else in the world.

“We’ve been on such a great run these last few years, how could you NOT love this team?”, he said. “LET’S GO LIGHTNING!”

Monday night at Sudspuckers Sports Pubbery in Wesley Chapel, he got more and more excited with each goal scored by the Lightning as they beat the New York Islanders 8-0 to take a 3-2 series lead in the Semifinals. When Luke Schenn scored the final goal of the night just after midway through the third period, another bar patron, equally amused and annoyed by Smitheren’s increasingly unhinged antics, said, “Hey buddy, if you love the Tampa Bay Lightning so much, why don’t you marry them?”

As the rest of the bar laughed, Smitheren sat down, contemplated the suggestion briefly and said, “You know what? I will! I will marry the Tampa Bay Lightning!”

He ran out of the bar, jumped into his car and drove to Amalie Arena in downtown Tampa, fighting heavy traffic. He arrived at the entrance to the players parking lot on the east side of the arena just as the Lightning players were starting to leave. He got out and started screaming, “I LOVE YOU! I LOVE YOU ALL SO MUCH!! PLEASE PLEASE PLEASE MAKE ME THE HAPPIEST MAN IN THE WORLD AND TAKE MY HAND IN MARRIAGE!!”

Initially, the team reacted with confusion and maybe even some fear at the extremely passionate proposal, but eventually became emotionally overwhelmed and said yes. Mikhail Sergachev, Pat Maroon, Alex Killorn and Nikita Kucherov were among those witnessed shedding tears of joy. “I was NOT crying”, said Maroon. “It was raining. Plus, what if I was crying? I’m not made of stone, you know.”

They all jumped into a bus together and found a notary public who handled the nuptials early Tuesday morning. “I’m overjoyed, of course”, said head coach Jon Cooper. “I just hope this isn’t a distraction. After all, we just met this guy and…” Smitheren placed his finger on Coopers lips to shush him and whispered, “I’ve been here the whole time.”

Team captain Steven Stamkos said, “It was a pretty impetuous move, for sure. I mean, some of us are already married to other people, so that’s something that we’re going to have to sort out. But hey, love is love.”

Smitheren and the Tampa Bay Lightning are currently honeymooning in Uniondale, New York, where the team will play Game 6 of the Semifinals tonight.