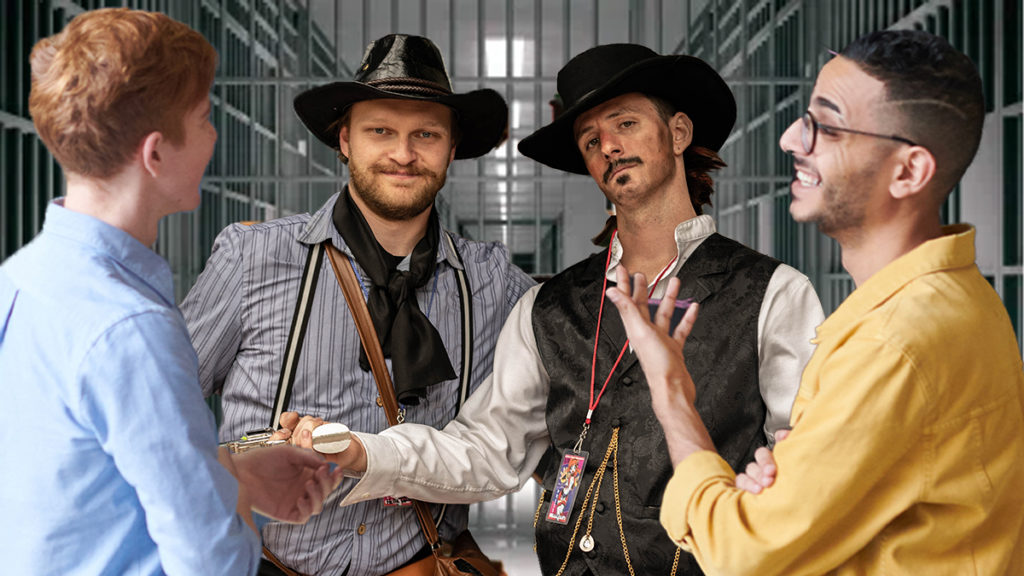 Four young men who met in a Tampa police holding cell after being detained for drunk and disorderly conduct at the 2020 Gasparilla parade have decided to join forces and form a musical group, a business of some sort or some other venture.

“It’s amazing that we were brought together under such crazy circumstances and that none of us were at fault for any of it,” says Kyle, one of the members.

Another member, also named Kyle, says, “Yeah, what are the odds that four guys who were just minding their own business would all get hassled by the cops for not doing anything at all and end up becoming partners in something to be determined? Crazy!”

A third member of the newly-formed collective, also named Kyle added, “What’s crazy to me is that we’re all named Kyle! Now THAT’S crazy!”

At that point, the fourth young man mentioned, “Actually, my name is Chad. I keep telling you guys.”

To which the others replied in unison, “SHUT UP KYLE!” and exchanged high-fives…”

When I asked what they plan to do, now that they’ve agreed to work together in some fashion, one of the Kyles said, “I think a band would be good. I can’t play an instrument…”

He was interrupted by another Kyle, saying “Musical instruments are for fags!” Before continuing, “… but I can spit some dope freestyle beatzzz,” adding extra emphasis at the end of that word to make sure I’d know it was a ‘Z’.

One of the other Kyles suggested, “I thought we could make a business company, get an office, some computers and bunch of desks to make some corporates. My dad works at a place like that and they gets all kinds of loot!”

The one who said his name was Chad replied, “How about a charity? Something where we can do good in the community and help people less fortunate.”

To which all the other Kyles responded once again with “SHUT UP KYLE!”, only this time trading head-butts.

“It doesn’t matter what we decide to do,” said the Kyle that seemed to be taking some sort of leadership position. “Whatever we do, by harnessing our combined Kyle-ness, is naturally going to be awesome!”

That’s when Chad said, “Let’s be honest; at best, it’ll probably be the start of a co-ed rec league kickball team”, causing the Kyles to erupt in a series of high-pitched, chimpanzee-style shrieks, punctuated by taking turns punching each other in the chest.

As of now, the direction of this dynamic new collective remains unresolved due to being kicked out of the Steak & Shake across the street from Plant High School for making too much racket.