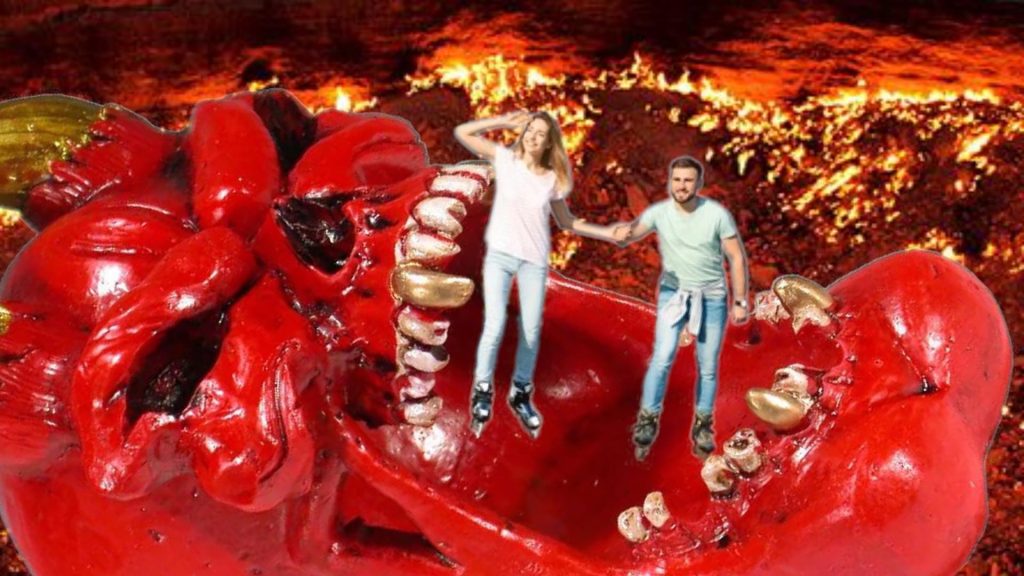 What some originally thought was a discotek roller rink has actually turned out to be a living, evil, demonic pit full of razor sharp teeth, swallowing and killing anything that interacts with it.

Why it was confused as a roller rink is not clear.

“It doesn’t look like a roller rink, who said this was a roller rink?” Said some f***ing nobody loser that nobody will ever remember or care about.

“Yea, it’s clearly not a roller rink, it’s a monstrosity that’s definitely super dangerous and should be exterminated as quickly as possible, if that’s possible at all.” Said another who-gives-a-rats-ass worthless pile of protoplasm.

“I’m not a real person!” Said a fake person.

“Me neither! I’m also not real! I’m just made up for this fake news article!” Said a second fake person.

“I might be the only real person in this God-forsaken hell-hole.” Said the real person.

“Nobody cares!” I chimed in.

“You know what does matter?” I asked the group of worthless nobodies, plus the one real person.

“What!” They all piped up in unison.

“Yay!” They all applauded, wide-eyed with gap-toothed grins.

“Yea! You can buy them on our ‘shop’ page on the website!” I said joyously.

Then my mood swung the other way and I began feeling violent urges. (Fake ones, strictly for the sake of this story.)

“I’m feeling violent now, my little pretties!” I snickered and/or cackled as a maleficent expression settled on my face.

“No! No! Please don’t be violent towards us master! We love you!” Pleaded the mostly fake people and that one pesky real person.

“Fine!” My voice boomed, the sound waves knocking the people to their knees and on their backs.

Then the FBI walked into my office.

“Hey Mr. Jacobs,” the leading agent said warmly, “it looks like you’re typing some pretty radical, manic, stuff there. Is everything alright?” She asked. (Yes, it’s a she, stop being so surprised.)

“Yea, everything’s great!” I said, trying to backspace the writing I had just been doing.

“It might look a little wild and unorthodox, but that’s just my process!” I over-manically laughed, not helping my case that I was totally fine and under control. (But who’s control?)

“Ok.” The agent said skeptically, eyes scanning over my desk and the garbage strewn about it.

“We know you like to have fun with your little ‘fantasy writings.’” The agent said patronizingly.

“But we just have to stop by every now and then and make sure you’re not having a dangerous psychotic breakdown.” She said with an ere of seriousness.

“Yes, yes, of course, I understand.” I nodded in compliance.

“I’m a pu**y! I could never do anything dangerous, I like my cushy lifestyle too much to compromise it!” I rationalized with the agent, which fell on deaf ears because she did not like my derogative use of the word pu**y.

“I have a pu**y you know. Does that mean I can’t be dangerous?” She said, hovering her hand near her holstered gun as if to prove a point.

“You know what I meant. I’m sorry. I’m sorry.” I covertly rolled my eyes as I groveled.

“Good. Well, we just wanted to stop by and make sure you were still not a threat.” Said the agent, almost tauntingly.

“Yup, still not a threat. Never will be. Never want to be. Just like writing funny joke stories that sometimes go off the rails, which is completely legal and harmless.” I said, reminding the agent of my free speech, satire, rights.

“Of course John. And that’s fine. We’ll be seeing you.” The agent said, turning and leaving with the other agents who had been standing with her.

“Oops.” The agent knocked over my favorite mug which said, “I’m a good fake journalist,” shattering it on my floor, soaking the carpet with Code Red Mountain Dew which had been soaking in the mug for weeks now.

I smiled through my teeth at the agent.

“No problem agent! I hated that mug anyway, I needed a new one.” I was barely able to get out without voicing my rage at her negligence towards me.

“You two, go outside and wait for me.” Said the lead agent unexpectedly to the other agents.

“Yes ma’am.” They responded, leaving my office and closing the door behind them, leaving me alone with the head agent.

“We’ve had this rapport for a while now, haven’t we John?” Said the lead agent to me all alone in my office now.

“Sure, I guess so.” I responded, confused.

She started undoing her blouse one button at a time as she now walked behind my desk to face me.

“Have you ever wanted me?” She said directly, in a weirdly sexy, entrapment-kind-of-way.

“Uhm.” I said, gulping, nervous and unsure about what was happening.

“Yea, I mean, you’re pretty, I guess I’ve thought about you before.” I said, not knowing exactly how to handle this situation.

“Well…” The lead agent leaned in close to my ear.

“You’re never going to have me.” She then lightly slapped me across the face, and withdrew, buttoning back up her shirt, and winking at me.

“What the-“ I whispered to myself, as she then opened back up my office door and communicated with the other agents.

“Time to go boys!” She said, and they all marched down the hallway towards the elevator.

I now had an unwanted erection so I relieved myself into the garbage bin next to my desk.

As I finished, it was too late to register that I didn’t have a trash big in the garbage bin, and the bin is made of intertwined aluminum netting, so it was going to be very hard to clean off.

I closed my laptop and decided I didn’t want to write anymore today.

“Thank God, we’ve been spared!” Shouted the fake people from the story and the one real guy, from my closed laptop.

“Yea, you’ll live to see another day.” I spoke, staring blankly off into the distance.