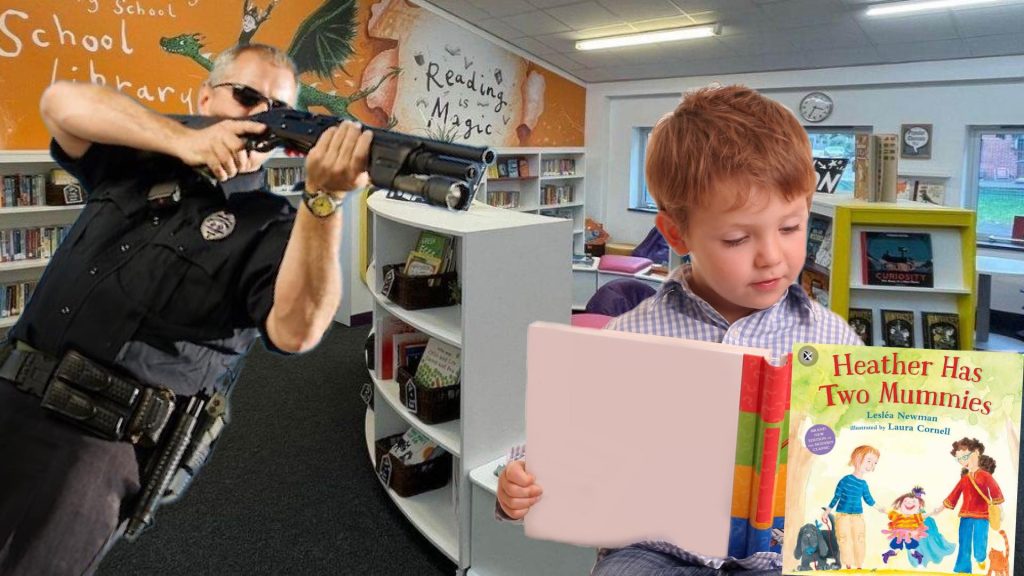 A second grader is in critical condition today after being shot by his school resource officer while reading Lesléa Newman’s 1989 classic picture book ‘Heather Has Two Mommies’.

“I was patrolling the library and saw the gay book,” said officer Frank Johnnie. “At first I was just trying to shoot the book, but the kid was behind it, reading it.”

As part of the “Don’t Say Gay” bill signed into law by Florida Governor Ron DeSantis, children are not allowed to be groomed for sex by schoolteachers.

“We have been collecting every book in the school that could be considered gay and burning them,” said Hernando County Superintendent, Leonard Riley. “The law is very vague, so we just got to make sure kids never find out what gay people are.”

The anonymous second grader is expected to recover but will be shot again if he tries reading more books about inclusion or the LGBTQ community.

“We’re not sure why that book was in the library,” said Riley. “We’ve instructed our staff to go to extreme measures to enforce this law.”

Superintendent Riley says that the school librarian has been fired and will be charged with child endangerment.

Officer Johnnie will not be facing any charges and will be receiving a pay raise and a special thank you package from Governor DeSantis.